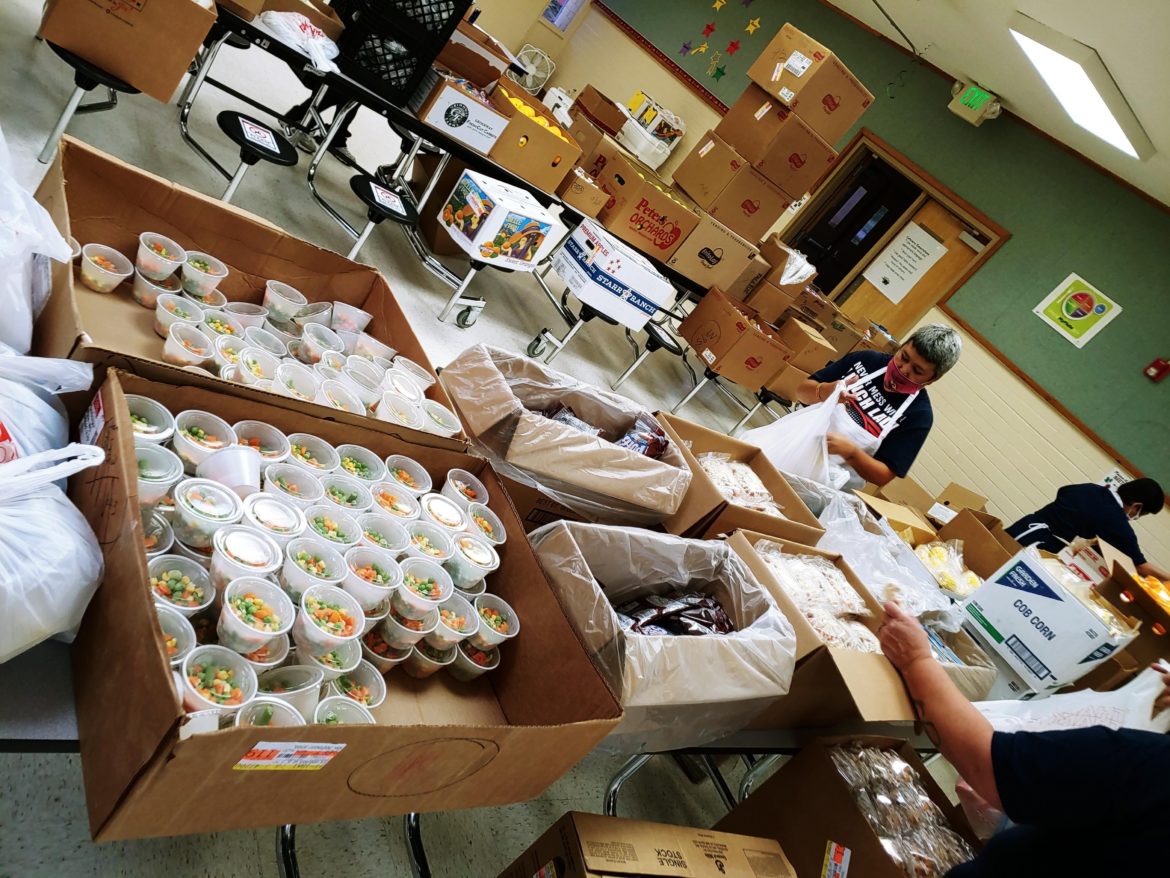 The day starts early each Friday at the Mora Independent School District in northern New Mexico.

Staff arrive before the sun is up to pack coolers of breakfasts and lunches to supply 310 remote students with five days of meals. By 9 a.m., loaded school buses rumble out of the parking lot on their delivery run.

Another 25 students pick up meals at school cafeterias each week day, while 71 students attending in-person classes eat at school Monday through Thursday.

This story originally appeared at New Mexico In Depth and is republished here with permission.

Since COVID-19 shut down schools in March, she’s mailed meals through the postal service and distributed them using six fire departments around the rural district. She and other staff also have hand-delivered meals house to house.

But in early September, the district started delivering meals to bus stops, sometimes as close to kids’ homes as the end of a driveway. A phone call reminds parents they’re coming.

“The bus deliveries, that helped us a lot,” Martinez said. Before, just 100 families participated in meal programs, but now more than 400 receive meals. “By us actually reaching out to the families and offering the service of having the meals delivered to them, that increased our participation.”

She keeps in mind that 410 of the district’s 450 students participate in the national school lunch program, one of the nation’s largest anti-hunger efforts. In New Mexico, three of every four schools qualify under the federal program to provide all their students with free meals.

Before COVID-19 hit, New Mexico had one of the highest rates of food insecurity in the nation. That has risen since March with higher unemployment, school closures, and shortages of some food-items. Measuring the increase in food insecurity to date is guesswork, but Feeding America projects one in five New Mexicans, and one in three children, might not know where their next meal comes from. This story is part of a three-story series New Mexico In Depth is publishing that explores various ways New Mexicans have responded to the food insecurity crisis.

Research has shown that those school meals are critical to keeping kids from going hungry. They’re often more nutritious than meals packed at home, and save money for low-income families.

But months into New Mexico’s school closures, despite best efforts, fewer New Mexico school children are being fed than before schools closed this spring, according to districts. Research shows it’s a nationwide trend that tracks with normal times when the number of children fed falls because class isn’t in session.

A key lesson learned from attempting to feed schoolchildren during a historic public health crisis is that flexibility matters, both in oversight of programs and in options available to families, like those in Mora. The more options, the more likely a family will find something that works.

“Food is one of the most important things for kids, and if they are not eating or being fed properly, they’re not going to learn,” said Michael A. Chavez, director of the Student Success and Wellness Bureau and New Mexico’s National School Lunch Program director. With Covid-19, “We’ve had to think outside the box to make sure all the kids are getting a meal each day.”

From this upheaval, some hope long-term solutions to food insecurity will emerge and permanent changes will follow.

“We know that when the pandemic is over, hunger is not going to end, so these flexibilities have shown us that if we want to run programs in a way that tries to provide access as opposed to limit access, we can do that,” said Tim Davis, a public benefits attorney with the New Mexico Center on Law and Poverty.

When schools closed in March to stop the spread of COVID-19, government officials and school staff took steps to help families continue using school meal programs, which can include breakfast, lunch, a snack, and sometimes dinner.

The U.S. Department of Agriculture waived guidelines on where, when, and which children receive meals, freeing schools to customize how meals reach families.

Meal distribution in New Mexico moved from cafeterias to parks, libraries, and youth centers easier for children to reach or for staff to work from, or to mobile deliveries, as Mora has done. They allowed schools to give more than one meal at a time, send home bulk groceries like a gallon of milk instead of single-servings, and provide for seven days a week instead of five. Instead of staff looking up a student’s name on a roster, now anyone under age 18 who walks up to the table can walk away with food in hand.

“At one of our sites, we had this woman who would walk probably about five blocks for her kids to eat, and she had one child in a stroller, probably two and half or three years old, in addition to her other kids. … We could only feed the kids on the roster, so legally we couldn’t give the child a meal,” said Dean Gallegos, food program manager at Bernalillo Public Schools. With the waivers, that child could eat, too.

Some 1,500 Bernalillo Public Schools students live in seven pueblos, which have been closed for months, Gallegos said. School staff have been driving prepared meals to where students live, sometimes 30 miles from school, giving out multiple meals at a time, both breakfast and lunch.

Staff have adjusted to the seasons, ducking into the shade of delivery trucks to escape the summer sun baking the hot asphalt during midday lunch deliveries and braving gusting winds in early September. Now, as the days begin to shorten, they’re studying parking lot lighting in anticipation of the winter months, when evening meal pick-ups will finish after dark.

“We’ve had it all — rain, wind, heat,” Kemp said. “I think a lot of people haven’t realized that we never stopped.”

“Doesn’t matter if it’s four kids, two kids,” she said. “They’re in school, we need to feed them.”

But despite the flexibility and wholesale push, the meals don’t reach a wide swath of New Mexico children. In Albuquerque, 40,000 students are typically fed at school, but just 20,000 show up for meal programs, Kemp said. School enrollment is down, too, Kemp pointed out. Families may be visiting food banks, or able to afford groceries and only relied on school lunch as a convenience, she said: it’s not something she can track.

In Bernalillo, before the pandemic about 2,600 students were fed, but the number has dropped to around 1,500. Fridays were particularly slow at meal sites until they started serving posole and pizza on alternating weeks, Gallegos said. He doesn’t see a fix with classes online: “Opening up schools, that’s the only thing.”

A reduction in the number of students participating in government meal programs when schools are closed should be expected, according to research published in the American Journal of Public Health this month. The study found a small fraction of children who rely on free or reduced meal programs during the school year show up for summer meal programs. Those kids may spend summer months hungry.

Given that pattern, during a Nutrition and Obesity Policy Research and Evaluation Network online presentation in August, Eliza Kinsey, a co-author of that study, said that even with “heroic efforts” and the combined work of schools, private sector donations, and USDA waivers, it’s unlikely school staff will be able to reach every family during this pandemic.

This is where the temporary federal Pandemic Benefit Transfer Program comes in, say those who support multiple options as a way of making sure as many families are receiving nutritious meals for their children. Some parents find it tough to make it to meal pick-ups, most of which occur during business hours, because of a work schedule,  or no childcare or transportation. Modeled after a summer initiative for families who participated in free and reduced lunch programs during the school year, the program gives families an Electronic Benefit Transfer card, similar to a prepaid debit card with $5.70 per child per missed school day already loaded on it. Conceivably, the cards could help families purchase groceries.

“It’s not a ton of money, but we were just kind of going based on what USDA gave us,” Chavez said. “At least it’s something.”

Mostmeals program staff can’t track whichfamilies are using P-EBT or any of the other options that have arisen during the pandemic, so it’s difficult to know if the program is helping many children who might otherwise fall through the cracks. Most of what school staff report hearing are the frustrations with cards lost in the mail.

Nearly 349,000 students enrolled in the program, which distributed $150 million this year, according to the New Mexico’s Humans Services Department.

Research from the Brookings Institution suggested 2.7 million to 3.9 million children nationwide were reached through that program. These electronic grocery vouchers, the institution’s researchers suggest, spare school staff the risks of exposure to COVID-19 and reduce the threat of hot spots at school meal sites. Researchers cited incidents in 45 states where meal programs were suspended or altered because someone with the program tested positive for COVID-19.

Some worry it doubles the drawdown on federal dollars, which already pay for meals at schools. School district food staff noted a decrease in pick-ups coinciding with those payments going out. Pandemic EBT expires September 30, unless Congress renews it in a pending stimulus package.

States will be required to report on how USDA waivers were used, giving insight into what worked and what did not. The lessons could go toward helping government officials and school staff think more effectively about how to reach more school children during summer breaks, holidays, and snow days, Kinsey said.

A lot of the waivers responding to the pandemic “also address universal challenges that child nutrition programs face in reaching children when schools are closed during more normal times,” Kinsey said.

Future research could also evaluate how effectively programs met nutritional needs of children and families, particularly Black and Hispanic families, which are disproportionately impacted by both food insecurity and COVID-19.

“During this pandemic…we see that these flexibilities work,” said Davis, with the Center on Law and Poverty. “Reducing these barriers to participation are completely aligned with the purpose of reducing hunger, and we don’t need a pandemic to reduce these barriers, especially not in the richest country in the world. Nobody should be going hungry.”