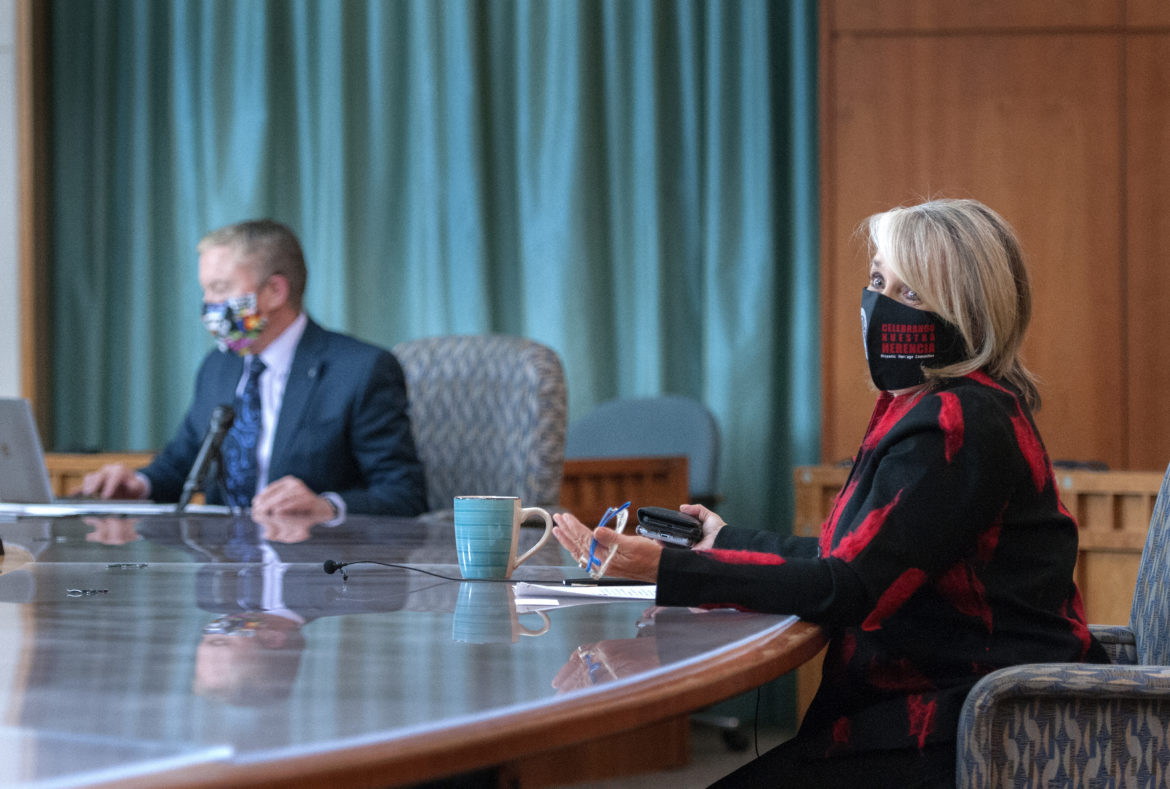 Governor Michelle Lujan Grisham, right, and Human Services Sec. Dr. David Scrase get ready to give their weekly update on COVID-19 in New Mexico and the state effort to control it. The news conference was held at the Roundhouse in Santa Fe, Thursday October 1, 2020.

“We have sacrificed so much in this state. We’ve lost New Mexicans. We have folks with chronic illnesses,” Lujan Grisham said. “We have folks who can’t go back to work. We’ve lost businesses, family businesses that have been in the family for generations. We can’t let all the sacrifices we’ve made for each other to be in vain.”

Two possibilities for the increase in new cases that the governor pointed to was the Labor Day weekend at the beginning of September and the easing of some restrictions shortly before that.

“We did alert New Mexicans that we were expecting a bump from Labor Day and we were increasing risk,” she said.

She also said the state is seeing too many large gathings, including family gatherings.

Human Services Department Secretary Dr. David Scrase said the state had 171 daily cases, on a seven-day rolling average, as of Sept. 25. The state’s goal is to keep that number below 168 cases.

And hospitalizations have also increased.

“This is the real thing, the number of hospitalizations shows us that and we really need to buckle down,” Scrase said.

According to the governor, the 86 currently hospitalized represents a 30 percent increase in one week, since the state reported 66 were hospitalized on Sept. 24.

The spread rate—or the number of people that, on average, someone with COVID-19 will spread the disease to—was at 1.27 as of Sept. 30, well above the goal of 1.05 or below.

On other criteria, however, the state remained in good shape. The test was averaging 6,086 tests per day on a seven-day rolling average as of Sept. 29, above the state’s goal of at least 5,000 cases. And while the test positivity rate increased to 3.24 percent as of Sept. 29, this remains below the goal of 5 percent.

Southern and eastern New Mexico are two areas of concern for the state.

“There’s a very large amount of activity along the eastern border along New Mexico and Texas, even more so in Texas, but of course we’re seeing it here,” Scrase said “And Doña Ana County is also seeing a significant number of cases, with their cases per 100,000 going back into the red today as well.”

Another indication of the increasing spread is that rapid responses, or when the state mobilizes after the report of a positive test at a workplace, have increased again.

Rapid responses spiked the most in Lea County, by 90 percent week-over-week, in Eddy County by 60 percent, and in Curry County by 50 percent.

“It isn’t to pick on anyone or any county, it’s to point out that we can and must be better,” Lujan Grisham said.