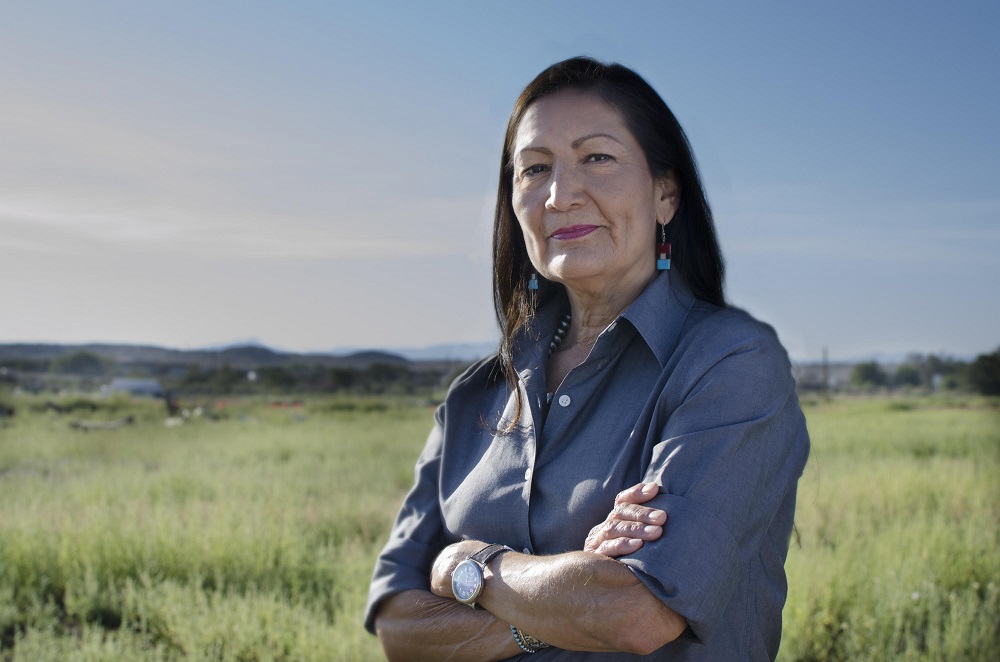 This week, we’re running a series of interviews with New Mexico’s congressional candidates, each of whom answered questions about issues related to our energy future, water scarcity and climate change.

The following interview is with Deb Haaland, who is running for reelection to the U.S. House of Representatives for the state’s first congressional district.

Haaland, a member of Laguna Pueblo, was one of the first two indigenous women to be elected to Congress when she won her election in 2018. Prior to that, Haaland served as chairwoman of the New Mexico Democratic Party from 2015 to 2017. In 2014, Haaland ran for Lieutenant Governor on former state Attorney General Gary King’s gubernatorial ticket, but ultimately lost to Republican Susana Martinez and Lieutenant Governor John Sanchez. Haaland also served on then-president Barack Obama’s 2012 reelection campaign as New Mexico’s vote director for Native Americans.

Garcia Holmes responded to inquiries made by NM Political Report for participating in this Q&A but refused a phone interview.

Deb Haaland: For New Mexico—unlimited wind, we know that, just step outside—and solar. We have about 360 days of sun per year. I think we could be a leader in the world on wind and solar energy in New Mexico.

There are so many areas in the United States that have solar and wind power. We need to do transmission lines, transmitting that energy from place to place. Even if your state isn’t one where you have 360 days of sun per year, states like ours can produce that energy and move it through to the area where it’s needed. I think if we’re all connected, and we’re upgrading the grid and upgrading the infrastructure and upgrading the technology to renewable energy, there isn’t a place in the country that wouldn’t be able to take advantage of that. That’s what I would like to see happen.

Deb Haaland: I am a huge fan of the federal government supporting this type of infrastructure. We need it. I think the federal government has an obligation to its citizens with respect to climate change. This is a real threat. It’s an existential threat. I support any tax incentives that the federal government can give so people can go to solar, I would favor programs that would help people to actually pay to move into solar. I think that part of any infrastructure plan that we have, we should absolutely make sure that there’s funding for that. The Energy Transition Act here in New Mexico that the state legislature passed and the governor signed, I’m wholeheartedly in support of doing everything I can on the federal side to move that forward.

But look, it’s expensive. If you want to put solar on your house, it’s gonna cost about $20,000 on average. Some people wouldn’t ever qualify for a loan—I know I never would have qualified for a loan as a single mom, living paycheck to paycheck, to put solar on my home. We need to have programs ready for folks like me when I was a single mom and struggling to live paycheck to paycheck, to make sure that we can find the resources people need to move their homes into a renewable energy economy.

I think a very large solar and wind infrastructure needs to be embraced by the federal government and that’s what we need to include for moving forward. As I mentioned, here in New Mexico we have 360 of sun days per year and tons of wind. There are landowners all over New Mexico who rent out pieces of their land for the wind towers, and I feel like it’s a win-win situation for so many folks. I would absolutely support overall renewable energy moving forward in any infrastructure plan that the Congress undertakes.

Deb Haaland: Yes, that absolutely is a problem. I want everyone to know that I am always ready to partner with our state and local governments on ensuring that we do whatever we can in the Congress to support any issues with respect to water. We live in a desert at 5,000 feet. Water has always been an issue in New Mexico.

What I would like to see is more support for local farmers to use water and to make sure that water rights are acknowledged and supported, so that we can grow food more locally. New Mexico is an agricultural state. And I think that by using the water as intended, that’s one way to ensure we can keep water in New Mexico.

Climate change—that is an existential threat. That is what is causing the change in temperatures all over the country, we’re seeing the wildfires in California, and so forth. We need to be doing everything we can to fight climate change and get more stability in our natural system.

It’s no secret that we’re not seeing as much snow as we used to, [and] the rainy seasons are off. Fighting climate change is absolutely something that we need to undertake and we need to undertake it now. But, protecting our water and in New Mexico is paramount because I know that a lot of people rely on it. I’m absolutely ready to do that, whenever I can.

Folks who are using water to grow food, to grow their businesses, to have clean running water, in their homes, that should be a priority. Right now, for example, there are many areas on the Navajo Nation where people don’t even have running water. And there are a lot of places all over New Mexico, where water is polluted because of mining and because of other activities that have happened on those lands. Because water resources are very scarce in New Mexico, we need to put a priority on the health and well being of our communities, first, so that we can make sure that they have the clean water that they need.

Deb Haaland: We need to protect our public lands. During this administration, it’s been a fight. The Trump administration has done everything they can to cut off big swaths of our public lands. They reduced Bear Ears National Monument, they’ve reduced Grand Staircase-Escalante, they’ve threatened to sell gas and oil leases in the areas surrounding Chaco Canyon.

I think the role of the federal government is to protect our public lands for future generations. It’s so frustrating that the Department of the Interior, [and] the Secretary of the Interior has really been complicit in all the terrible things that the Trump administration has threatened on our public lands. In fact, the mission of the Department of the Interior is to conserve and manage the nation’s natural resources and cultural heritage. And it’s for the benefit and enjoyment of the American people, and they’re doing quite the opposite, by cutting off these swaths of cultural resources. Bears Ears and Grand Staircase-Escalante, those are ancestral homelands to the Pueblo Indians. When they do these types of things—it goes against what they’re supposed to be doing, number one—and it is just heartbreaking to the indigenous people who consider many of those areas as sacred sites.

Likewise, the Trump administration building the wall on the southern border has desecrated many areas and public lands. We’ve had hearings in our [Environment and Natural Resources] committee regarding these issues. The Tohono O’odham Tribe, for example, we had them in for a hearing and the tribal chairman, during his testimony, was weeping at the Trump administration blasting with dynamite their sacred burial ground.

What this administration is doing goes against the mission of the Department of the Interior, and as such we members of Congress have an obligation to hold them accountable. So the role of the federal government is to protect our public lands. The role of the Congress is to hold the administration accountable when they desecrate the land and they aren’t caring for the land under their charge.

Deb Haaland: I want to remind everyone that exterior boundaries of tribal nations were drawn without any native folks at the table. When those original boundaries were drawn for any reservation, or pueblo or nation—it’s unlikely any of those tribal leaders were at the table when that was done. So when you think about a place like Standing Rock, where they were protesting the pipeline and protesting to protect their sacred lake—even though that sacred Lake wasn’t within the exterior boundaries of their reservation. They still have an obligation to protect it, because it is a sacred site to them.

The story I just told you, about the Tohono O’odham tribe, and their land and their sacred burial site being blasted apart by dynamite, so that President Trump could build his wall—they were notified about two hours ahead of time, by text message. That is not tribal consultation.

Tribal consultation needs to be embraced, it needs to be full, it needs to be real, it needs to be serial—and that means meetings with tribes several times. If it’s near their reservation land or their pueblo land, they should be brought into the conversation. And I have to say, before the Trump administration cut off those big swaths of Bears Ears and Grand Staircase-Escalante, many tribes spoke up. And we had tribes in hearings at our Natural Resources Committee, talking about how that would have been very harmful to them. Even though it’s national park land—that is ancestral homelands and sacred sites to many different tribes in the southwest. The Trump administration should have brought them to the table. Instead, they knew what those concerns were and did not pay attention. When there are any changes that would be important to tribes, with respect to any agency, the federal government has an obligation. And I think that tribal consultation is one of the big issues that absolutely needs to happen.

If you recall during the Obama administration, he had tribal nation conferences every single year, he made all of his cabinet members available to Indian country, to bring in a representative group of Native Americans to meet directly with the president, every year. And I know thatVice President Biden will do that when he is elected president.

I would like to see more native folks be invited to the table so that they can have direct conversations with the folks who are making the decisions. I think that is the best way to know what their concerns are—and to address them.