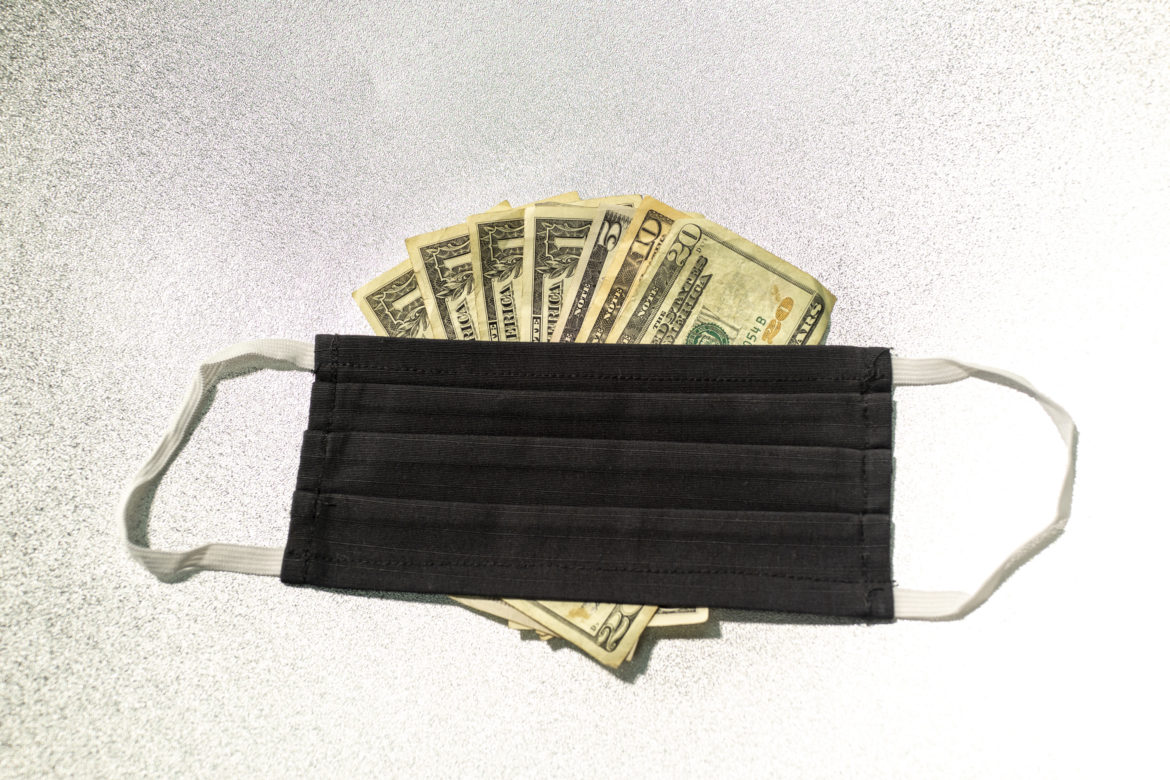 New Mexico's prison labor program sold hundreds of thousands of masks, like the one pictured, to agencies across the state.

How’s this for a business plan? Buy hundreds of thousands of cloth face masks, mark up the prices and sell them to a bunch of state agencies for a tidy profit. That’s what New Mexico’s prison system did earlier this year during the state’s scramble to purchase supplies to protect against the spread of COVID-19, a review of state records shows.

The New Mexico Corrections Department (NMCD) bought 371,000 cloth masks and sold them to at least a dozen other government agencies, making a minimum of $330,000 on the deals, according to state purchasing documents. Those funds were taxpayer dollars, and some came from New Mexico’s limited allotment of federal stimulus money, chipping away at the state’s resources to respond to the pandemic.

This story originally appeared at Searchlight New Mexico and is republished here with permission.

“You would hope, during an emergency situation, that there would be teamwork among the different agencies,” Sen. John Arthur Smith, outgoing chairman of the state Senate Finance Committee, told Searchlight in a Sept. 29 interview. Gov. Michelle Lujan Grisham “needs to be knocking some heads on that one,” Smith added.

The arrangement, which has been under scrutiny by nonpartisan state legislative analysts, first came to light during a hearing of the Courts, Corrections & Justice Committee at the end of July. State Rep. Andrea Romero (D-Santa Fe), who sits on the committee, wasn’t too pleased.

From the beginning of the pandemic, states around the country have had to navigate a chaotic marketplace for medical supplies and personal protective equipment (PPE). Lack of meaningful coordination from Washington forced states to compete against each other and the federal government in an effort to secure masks, ventilators and other critical items. It was “the most outrageous environment I’ve ever worked in, in my entire career,” Lujan Grisham told the Washington Post.

Indeed, in April, the state was nearly duped into spending millions of dollars on substandard medical equipment, a Searchlight investigation found.

The NMCD operation started as a simple attempt to meet the state’s vast need for protective gear. In the early days of the pandemic, the corrections department directed inmates to sew the masks, which were then made available for sale to other government entities. But the orders came in too quickly — in May, the Department of Health put in for 300,000 — and the incarcerated tailors couldn’t keep up. So the NMCD bought masks from other vendors to meet the demand and sold some of them at triple the original price. The profits went to the state’s prison labor operation, Corrections Industries.

In the most striking instance, the NMCD purchased 250,000 masks from the Alabama-based Tabb Textile Company for 60 cents apiece and sold them to the Department of Health for between $1.90 and $2.05 each, including delivery costs, according to purchase orders and invoices. That meant the health department paid at least $330,000 more than it would have cost the agency to buy the masks from Tabb directly.

An Aug. 4 memo written by a Legislative Finance Committee (LFC) staffer, which Romero provided to Searchlight, came to a similar conclusion, estimating the total overpayments by all state agencies at between $320,995 and $354,905 of taxpayers’ money.

Instead of a collaborative effort, “one could argue that [this] was more of an adversarial, open-market situation,” said Smith, who also chairs the LFC.

Nora Meyers Sackett, a spokesperson for Lujan Grisham, defended the arrangement. “Personal protective equipment was in short supply nationwide this summer — the state’s intent has been and will continue to be to procure the amount of equipment needed to protect as many New Mexicans as possible as quickly as possible,” Sackett wrote.

Robert Leon, director of Corrections Industries, said that the arrangement was sensible. Corrections Industries doesn’t receive funding from the legislature, so it needs to make profits on sales to stay solvent, he said. Corrections Industries regularly manufactures a variety of inmate-made products for the state, from business cards and courtroom benches to cleaning supplies. Inmate laborers started sewing masks recently; as of Oct. 2, they’d made 115,000, Leon said.

The markups were necessary to cover added expenses, including the cost of inmates inspecting the shipments, warehousing the supplies, breaking down the bulk orders and packaging the masks, he said.

It remains unclear why the DOH purchased the masks from the NMCD as opposed to buying them directly from the original supplier and whether the health department knew about the markup. When asked, DOH spokesperson David Morgan declined to answer those questions.

Morgan wrote that some of the masks purchased from the NMCD were distributed to the public free of charge and others are being held in reserve for public school students and staff.

The acting secretary of the Department of Finance and Administration, one of the agencies that oversees state purchasing, also wrote in a statement that the arrangement was responsible.

“The masks were below market value with a quick turnaround time,” Debbie Romero wrote. “That’s about as good as it gets.”