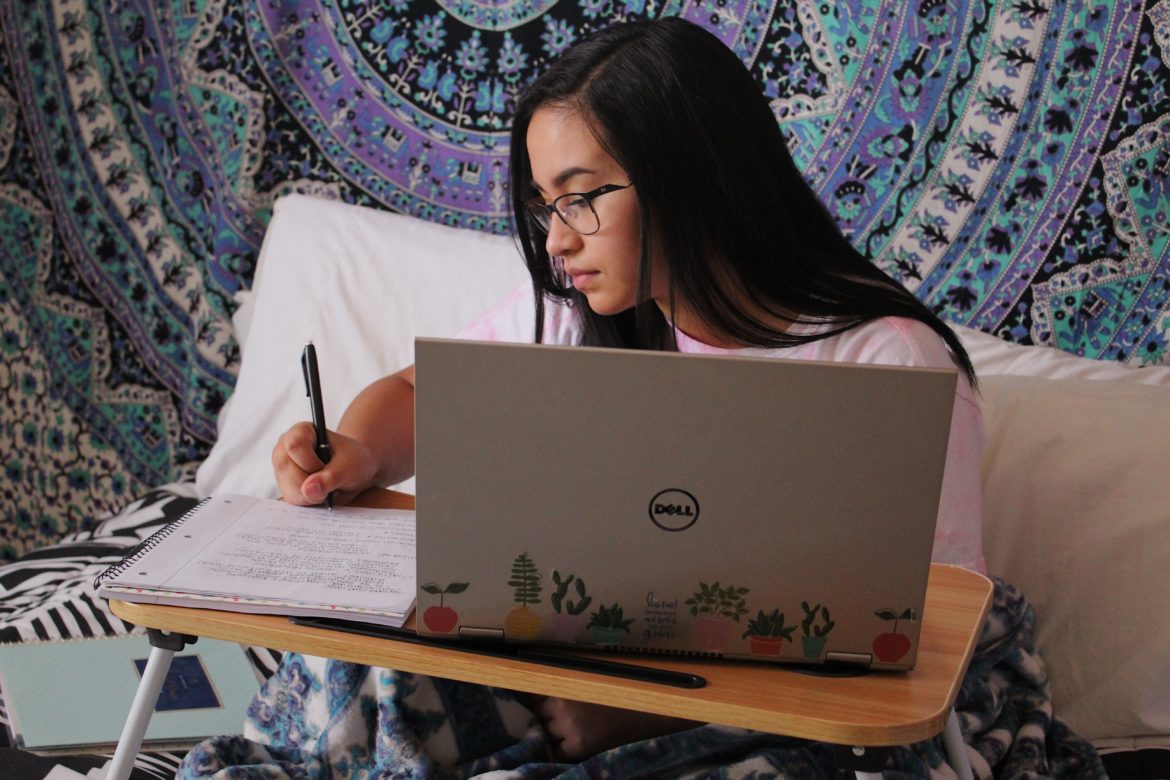 Marisa Gutierrez studies from her bedroom in Española, New Mexico. The high school scholar is completing her senior year and planning for college.

It’s a crisp late afternoon in Northern New Mexico, the kind of day that invites you to drive with your windows down or chop firewood in preparation for winter.

If this were a normal year, Marisa Gutierrez might not register the seasonal change. The 18 year old is usually beyond busy. But this is 2020, and the high school student body president, cheerleader, community organizer, and aspiring valedictorian is feeling cooped up.

This story was written by New Mexico In Depth and is republished with permission under a Creative Commons license.

Earlier this year the pandemic killed a conference she had hoped to attend at Emory University in Atlanta for Native American students across the country.

The teenager, who is a member of the Santa Clara Pueblo, one of New Mexico’s 23 Native American tribes, yearned to visit an out-of-state college campus.

“I have been on college campuses before but nothing outside of New Mexico,” she said.

She felt for her peers, too, knowing the missed opportunity it likely represented for many.

“I’ve had the advantage and opportunities to see a bunch of places, but a lot of people, specifically Natives, aren’t usually accustomed to looking outside of their Pueblo or outside of their tribe,” she said. “And so I think that would have been a great opportunity for them to experience, kind of, life outside the rez.”

But the missed opportunity hasn’t knocked the high achieving Gutierrez off her quest. Since the fifth grade she’s known she was going to college even if in the era of COVID the college campus is just a Google Hangout. She keeps a checklist.

College essay about feminism and the matriarchal customs with her family in Santa Clara Pueblo. Check.

It’s too soon to know whether she can check off valedictorian of Pojoaque Valley High School.

“I’ve been tied with at least three other people for the position since freshman year, so it’s really down to the wire,” Gutierrez said.

Gutierrez, whose GPA is 4.0 — 4.2 when weighted —  is on track for a lot of reasons compared to many New Mexicostudents, about three-fourths of whom are considered at-risk for poor education.

Both her parents are college graduates. Her father is a self-employed certified public accountant. Her mother is the Early Childhood Coordinator for the school system in Española where they live. The town of 10,000 is about 30 miles north of Santa Fe and adjacent to Santa Clara Pueblo.

The family has high-speed internet, too, unlike many Native American students in New Mexico. More than 40% of people living on tribal lands lack access to broadband, a percentage that jumps to 68% if they’re in rural areas. Nor is the family living day to day financially in a state where around 40 percent of Native American children live in poverty.

That conference would have given students an opportunity to meet 200 other high-school juniors and seniors from across the country as well as potential academic mentors. It would have showcased what’s possible in life, said Carmen Lopez, a Navajo woman who took over the organization in 2009 after earning degrees from Dartmouth and Harvard, where she ran the Native American Program.

But the virus forced the organization to shift its programming online.

The work College Horizons and groups like it do is important support for Native students. Now, disruption to those programs and the potential for less government support due to the pandemic pose extra hurdles to helping Native students successfully leap from high school to college.

Findings in the landmark Yazzie-Martinez court case suggest those outcomes mostly stem from decades of underspending and neglect by New Mexico, leading a judge in 2018 to order the state to dedicate more money and resources to the state’s at-risk student populations, including Native American children and youth.

Just 23 of the state’s 89 school districts educate the vast majority of New Mexico’s Indigenous students. They include urban centers like Albuquerque and Santa Fe, but most students — four of every five — attend rural districts in or near reservations and tribal communities. Nearly two thirds live in or near the Navajo Nation, in the state’s west and northwest.

Although there’s been progress, Native students still graduate high school at lower rates than their peers. As for college they made up only 4 percent of bachelor degree recipients at the state’s universities in the 2018-19 academic year, a slight dip from 2017 (4.5%) and 2016 (4.3%), according to the state’s Higher Education Department.

And in 2019, only 1 out of 10 Native American students completed an advanced placement  exam that would earn the student college credits while still in high school, according to plaintiffs in the Yazzie-Martinez lawsuit.

These troubling statistics underscore the need for programs whose mission is to help Native high school students prepare for and succeed in college, say educators and tribal leaders.

“We know that rigorous college preparatory curriculum is essential for Native students in order to create equitable and strong pipelines to college,” Lashawna Tso, New Mexico’s new assistant secretary of Indian Education, wrote in an email. Tso joined the administration after serving as chief of staff for the Speaker of the Navajo Nation Council.

College Horizons, for example, connects students across the country with admissions officers, mentors and other important figures on college campuses. Students write essays, fill out financial aid forms, are directed to scholarship resources and learn about education or testing requirements for universities of their choice. And the program also prepares them for life on a college campus where there are very few other Native students.

The cancelled conference at Emory University in Atlanta would have been this year’s highlight.

This year, the Leadership Institute had to cancel traveling to the East Coast and conduct its program online.

“These are life-changing experiences,” Pecos said, estimating that over 14 years the program has served 300 students, 80 percent of whom “have gone on to college and are doing very well.”

Teran Villa of Jemez Pueblo can vouch for that.

“If it wasn’t for the Leadership Institute I wouldn’t be where I’m at right now,” said Villa, who participated in the institute’s summer policy academy, went on to graduate from the University of New Mexico and is now the Student and Program Outreach coordinator at Jemez Pueblo Education Department.

“It provided me as a first generation college student the opportunity to go to a place that had a mix of some of our best minds that are not only great in their Western education but they’re extremely committed to their communities and their traditional knowledge and their fluency in their home languages and their participation in their home,” Villa said.

In 2020, in addition to cancellation of in-person events, government budget crunches threaten the very existence of programming meant for Indigenous students in their transition to college.

New Mexico state lawmakers cut college readiness funding in June during a special session to balance the state budget, although plaintiffs in the Yazzie-Martinez lawsuit are calling for increased funding for language programs and college admission waivers for low-income students.

“This could be the last cohort,” Agoyo, from Cochiti, Kewa and Ohkay Owingeh Pueblos, said.

Since its creation in 1999, the program typically houses incoming Native American freshmen at UNM on the main campus in Albuquerque for four to six weeks to familiarize themselves with dorm life. They also work on an academic plan with advisors and learn about scholarships and financial aid. A $1,000 scholarship is awarded to each participant who completes the program.

The 16 students enrolled in the program this past summer didn’t make it to campus. “We had to make a pretty significant shift,” said Daniel Begay, American Indian Student Services program manager, who is from the Navajo Nation and Santa Clara Pueblo.

Nearly half are at home taking first-year college classes online and completing the program. It  was adjusted to run through the fall 2020 semester due to the pandemic.
It is not all doom and gloom, however.

The administration of New Mexico Gov. Michelle Lujan Grisham appears to be taking steps to shore up college prep programs. This week it announced $4.5 million in federal funding to be distributed by the state Higher Education Department each year for the next seven years for college readiness activities for middle and high school students in low-income areas of the state, including the Española Valley, where Gutierrez lives.

In addition, over the next four years, the state agency will invest $3.4 million to monitor student success from birth to career. The collected data will help educators and policymakers identify student challenges early on so they can target their interventions and investments. The hope is they also will gain greater clarity about what educational practices and programs drive student success.

And more than $4.7 million in grants distributed through funding from the state’s Indian Education Act is reportedly going to tribes as well as school districts with a high Native American student population. Bolstering college and career readiness programs are a priority, along with beefing up culturally relevant education and traditional language programs.

The state’s financial struggles are far away from Gutierrez’s mind these days.

On a recent morning, she logged into her advanced placement classes. Later, she checked in with the student council to brainstorm a volunteer effort under public health restrictions. And, as she does on many days, she linked up remotely with friends for a few rounds of “Among Us,” an online game for groups of people who hide or reveal infiltrators on a spaceship.

“It can be very overwhelming thinking so much about the future and thinking about what’s gonna happen when you don’t even know what’s going to happen in the pandemic right now,” she said, noting the social isolation she and her classmates are experiencing. “I think it’s very important to focus on your mental health and mental wellbeing before starting on any big project.”

While the cancelled trip to Emory University was a disappointment, College Horizons has helped her navigate the decisions she must make in the coming year, Gutierrez said.

Even as COVID-19 affected relatives on the Navajo Nation, Lopez, the executive director, and her staff spent countless hours in their office on the Santa Ana Pueblo shifting all their programming into the digital space. The team leaned into helping students stay on top of the college admissions process while connecting them with mentors at universities across the country.

And coordinating with 115 faculty members from 56 universities and 200 students across six time zones, the summer program took to the web with a series of online discussions and events. While a bit more than half the participating students could access a device and a reliable internet connection, College Horizons had to provide devices and hot spots for nearly 90 students, Lopez said.

Gutierrez described the virtual summer conference as eye-opening. She’s thinking about computer science as a major, maybe a career, after getting into it in middle school.

“I’ve been told when looking for colleges that it might be hard to find other people like me in my field. That’s alway been in the back of my mind,” she said. “But through College Horizons, I met so many Indigenous women who are trailblazers in their field.”

This piece is part of a collaborative reporting project called Lesson Plans: Rural schools grapple with COVID. It includes the Institute for Nonprofit News, Charlottesville Tomorrow, El Paso Matters, Iowa Watch, The Nevada Independent, New Mexico in Depth, Underscore News/Pamplin Media Group and Wisconsin Watch/The Badger Project. The collaboration was made possible by a grant from the Walton Family Foundation.