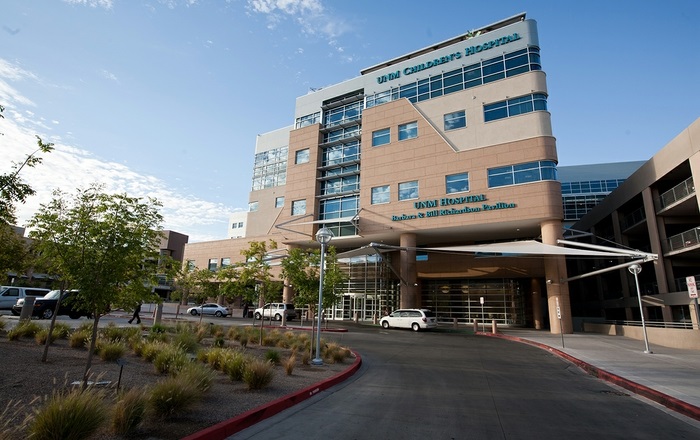 The University of New Mexico Hospital

While COVID-19 cases continue to increase in New Mexico and record-breaking number of infections happen multiple times a week, chief medical officers from the state’s three major medical providers are urging residents to work together to lower those numbers.

During a news briefing on Monday, the chief medical officers of Lovelace Health System, Presbyterian Healthcare Services and the University of New Mexico Health System all stressed that the state can still lower the number of daily cases with some work. But without putting in that work, they said, New Mexico could see catastrophic impacts.

For the past several weeks, state officials have been reporting more than 800 cases a day. Presbyterian Chief Medical Officer Dr. Jason Mitchell said if those daily numbers reach more than 900 on a consistent basis, the state would likely run short on resources.

“If we all pull together today, then we will all be okay. If we wait two weeks, three weeks, four weeks for any changes, we’re not going to be okay,” Mitchell said. “And there’s not enough staff anywhere that will be able to get us out of that.”

“Our best defense against this disease is going to be trying to keep each other from becoming infected, and that’s our very best strategy and defense,” Sandoval said.

University of New Mexico Health System Executive Physician Dr. David Pitcher said the fact that New Mexico has seen an increase of COVID-19 infections among younger patients means there is less of a need for intensive care.

“We tend to be seeing a surge of cases that represent a younger age population that do not have the same degree of demands on critical care resources,” Pitcher said. “So that’s actually somewhat positive this time around.”

But Mitchell said there is a caveat that comes with that silver lining.

“That means we also have a lot of spread we’re not aware of, and so what that leads to is significant spread in the community, with us not all being aware,” Mitchell said. “Eventually that gets into more vulnerable populations.”

“If we wait more, we are going to be in a difficult situation,” Sosa said.

Early on in the pandemic, state officials, including Gov. Michelle Lujan Grisham, said there was some discussion of field hospitals being built as a way to ease the stress on medical facilities. One location state officials said they were considering was an old Lovelace hospital building in Albuquerque. But Mitchell said it would take too much work and resources to get that facility to a place where it could provide adequate medical care.

“Using the old hospital facility, the amount of remediation it would take for it to become a true hospital that could take care of acutely ill patients makes it very limited,” Mitchell said.

Sandoval and Mitchell both stressed that even with record-breaking daily numbers, patients who need general care should not be scared to see their medical provider.

“There’s been so many implementations of different types of safety procedures for the patients coming through, we want to make certain that people still continue to seek care and don’t delay,” Sandoval said.

Mitchell said Presbyterian identified more than 20,000 vulnerable patients who would not likely be able to safely see a doctor in person. He said those patients were given extension on their prescriptions and in some cases, home monitoring. But, he added, health care facilities are one of the safest places to be right now.

“When you look at the list of where people get COVID and you go all the way down that list, the one group that’s not on that list is healthcare,” Mitchell said. “That’s not where people are getting COVID.”