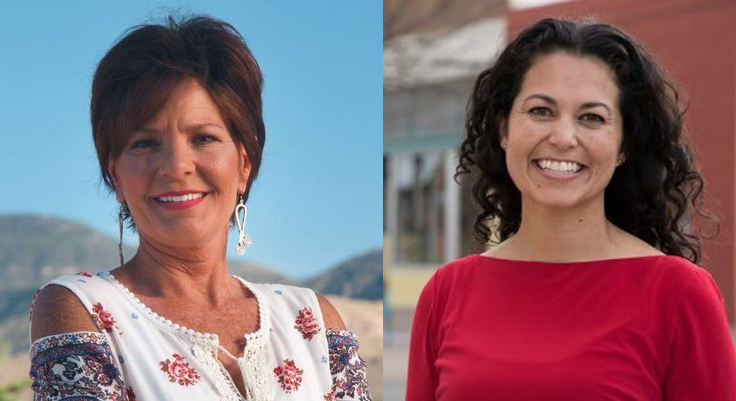 This year’s rematch between Democrat Xochitl Torres Small and Republican Yvette Herrell in New Mexico’s second congressional district is one of the most closely-watched in the nation, generating tensions within the state’s oil and gas industry and tens of millions in outside spending. Roll Call has identified Torres Small as one of the 10 most vulnerable House incumbents up for re-election this year. The respected Cook Political Report rates the race as a tossup.

This story was written by New Mexico In Depth and is republished with permission through a Creative Commons license.

At this point, candidates and outside groups have spent a combined sum exceeding $30 million. Spending in 2018 approached $14 million, in a year when across the country record spending was recorded. According to Matt Reichbach at the New Mexico Political Report, the New Mexico record occurred in the 2006 race for New Mexico’s 1st congressional district seat, at $14.8 million.

Torres Small has spent roughly $6.65 million, more than doubling Herrell’s $2.46 million. An array of outside groups have spent over $21 million.

That’s all according to the Election DataBot, created by the nonprofit investigative journalism organizing ProPublica. The bot collects campaign finance data from the Federal Elections Committee and other information from a variety of sources, and updates every 15 minutes. We won’t have a full picture of all spending until after the election is over and the next round of quarterly reports are filed.

The National Republican Campaign Committee remains the top spender in this race, pouring in roughly $5 million and far outstripping the $2.8 million spent by its Democratic counterpart, the DCCC. The seat is a much bigger prize for Republicans, whose chances of reclaiming the majority rely on unseating incumbents like Torres Small, who won by just under 4,000 votes as part of 2018’s “blue wave.”

However, Torres Small can count on the support of an array of outside liberal groups, including $1.3 million for the Wilderness Society Action Fund, $813,000 from House Majority PAC, and large sums from EMILY’s List and the League of Conservation Voters. Combine all 35 entities that the ElectionBot has detected, and the spending is roughly equal on both sides.

All that money is largely funding media advertising.

The two congressional committees have focused on running negative ads against the other side.

One ad from the NRCC, entitled “California,” seeks to tie Torres Small to House Speaker Nancy Pelosi while claiming she “voted to kill energy jobs.” Another Spanish-language ad conveys a similar message.

The DCCC, meanwhile, is running an ad entitled “Egregious” that highlights accusations of self-dealing and political corruption by Herrell.

These attacks are tailor-made for this district, where both Torres Small and Herrell have run ads touting their use of guns.

The political arm of the Wilderness Society, a group that advocates to protect public lands, has also spent big in the race. One positive ad from the group highlights Torres Small’s support of the “Great American Outdoors Act,” while a negative spot accuses Herrell of “trying to exploit our public lands” and “putting our drinking water at risk.”

New Mexico In Depth took a look at divisions within the New Mexico Oil and Gas industry, which includes smaller, New Mexico based oil companies as well as large out-of-state companies that are big producers in the Permian Basin.