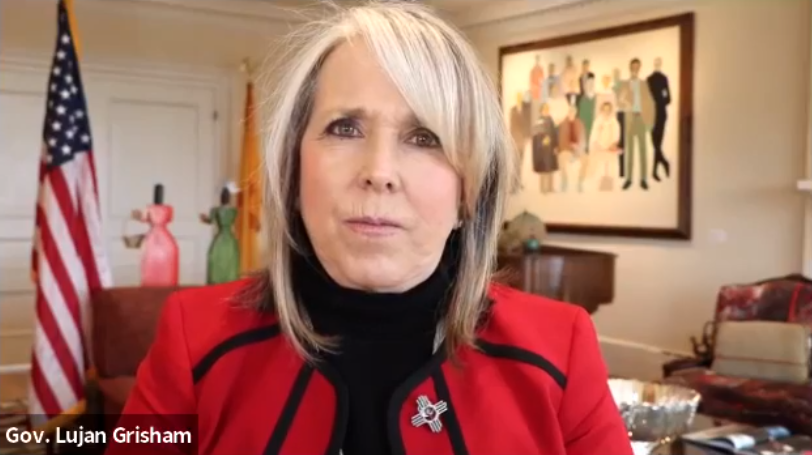 A screenshot of Gov. Michelle Lujan Grisham during a remote press conference on Nov. 13, 2020.

Warning that the state of New Mexico has been stretched to its brink by the virus, Gov. Michelle Lujan Grisham said Friday that the state would “reset” things by reimposing the strictest COVID-19 restrictions since the early days of the pandemic.

“You should stay at home except for only the most essential trips for health, safety and welfare,” Lujan Grisham said.

Non-essential businesses include places like gyms, restaurants, barbershops, spas and many other businesses that have been operating in recent months.

Restaurants will be able to operate curbside service and delivery, but will not be able to serve in-person diners either indoor or outdoor during the shutdown.

Places of worship would be able to operate at 25 percent capacity or 75 people, whichever was lower. The governor encouraged all places of worship “to do everything you can to provide those access points online and to minimize in-person activities that you can, consistent with this order.”

The governor also mentioned a special session, where she would ask legislators to pass legislation to provide aid to New Mexicans and businesses in the state that are suffering.

Lujan Grisham said the moment when she realized it was likely the state would need to implement a new shutdown was when Dr. Deborah Birx, the coordinator of the White House coronavirus task force, spoke to state leaders.

“But in this conversation people were really still arguing about the virus itself,” Lujan Grisham recounted. ‘Does testing really work?’ ‘Or that is the testing that New Mexico does, is it valid?’ ‘It’s not businesses, it’s individuals, so if we let businesses stay open, they can convince people by themselves.’” Others suggested just adding more hospital beds.

Lujan Grisham said the state has since procured more testing supplies, entered into more agreements with labs and other partners and set up more testing locations, some with aid from the federal government.

This led up to Friday’s announcement.

After the two-week “pause” or “reset” as the governor called the new shutdown, the state would implement a three-tiered county-by-county system for reopening.

This is a big change from earlier in the pandemic, when the spread of COVID-19 was the highest in the northwestern part of the state, but the state largely had the same restrictions in place statewide.

The three-tier system will be “a set of benchmarks for each county. State health officials and our modeling advisors [and] I have been readying this system,” she said.

She said the plan was aimed at the state’s economy as well as the public health.

“We feel very confident about this aspect of having the whole state, but county by county, working cohesively to continue to blunt the spread of the virus, but to regain economic normalcy to the highest degree that you can in a COVID world, pre-vaccine.”

Now, counties would have “skin in the game” to promote COVID-safe practices and testing, since they would need to do so to qualify for the highest tier or reopening.

“We also hope it creates the sort of a sense, because we want that today, that New Mexico has crushed this virus before, twice,” Lujan Grisham said. “And we’re going to do it again. We’re going to keep finding the strategies that garner long-term, productive results that save lives and prevent overwhelming our first responders and health care system.

The governor cited the large number of cases, hospitalizations and deaths in recent weeks.

“It will get even more harrowing than it is today,” Lujan Grisham said.

“Based on the numbers we’ve seen so far in this six-day lag, it’s going to go up even higher,” Scrase said.

Some labs take longer to process and report COVID-19 test results to the state, which results in the nearly weeklong lag for full results to be processed.

The state’s gating criteria were “mainly all red” according to Scrase, meaning the state was not meeting them.

And even the one criteria where the state was meeting its gating criteria, tests per day, came with some serious caveats. When combined with the test positivity rate, which was over 12 percent, Scrase said the state would need to be processing over 26,000 cases daily to identify enough COVID-19 cases to get things under control.

The hospital bed situation was also dire. One hospital in Albuquerque, Scrase said, was at 108 percent of ICU bed capacity and 130 percent of regular medical beds.

Scrase also said one hospital was considering doubling up those in an ICU, but other hospitals stepped in to help out.

The old Lovelace hospital in Albuquerque has been unused since the U.S. Army Corps of Engineers fixed it up and modernized it, but Lujan Grisham said it’s still an option.

The big problem is the lack of medical personnel to staff the beds that it would open up. The state is considering its options.

“We have 100 people in the [New Mexico Medical] Reserve Corps, we’ve got National Guard folks standing up, we’ve thought about paramedics and EMTs who can assist us,” she said. “And I don’t know the status of getting nurses from Canada, but it’s part of our plan.”

Republican Party of New Mexico chairman Steve Pearce said the two-week “trial crackdown  will continue to destroy our fragile economy and cause more pain and distress for New Mexicans.”

He also suggested that government workers and the governor should “give up their paychecks and share the statewide pain.”

The party also cited Arizona and Texas as states that “report steadier rates, keep businesses open and allow students to attend classes.” Hospitalizations in Arizona have risen to their highest levels since August while Texas health officials have warned hospitalizations there will increase to possible record levels in areas, as they already have in El Paso.

The governor said she was optimistic that New Mexico could once again lower the number of COVID-19 cases, as long as residents abide by COVID-safe practices.

“Make sure that you’re working with your employer to stay home. Please rethink any family plans. Don’t take these risks. Stop having informal gatherings, outside of your household. Triple-down on your mask-wearing,” she said. “Wash your hands. Stay away from people at least six feet. If we do those things, and we have this reset, we can blunt it again. We have before.”