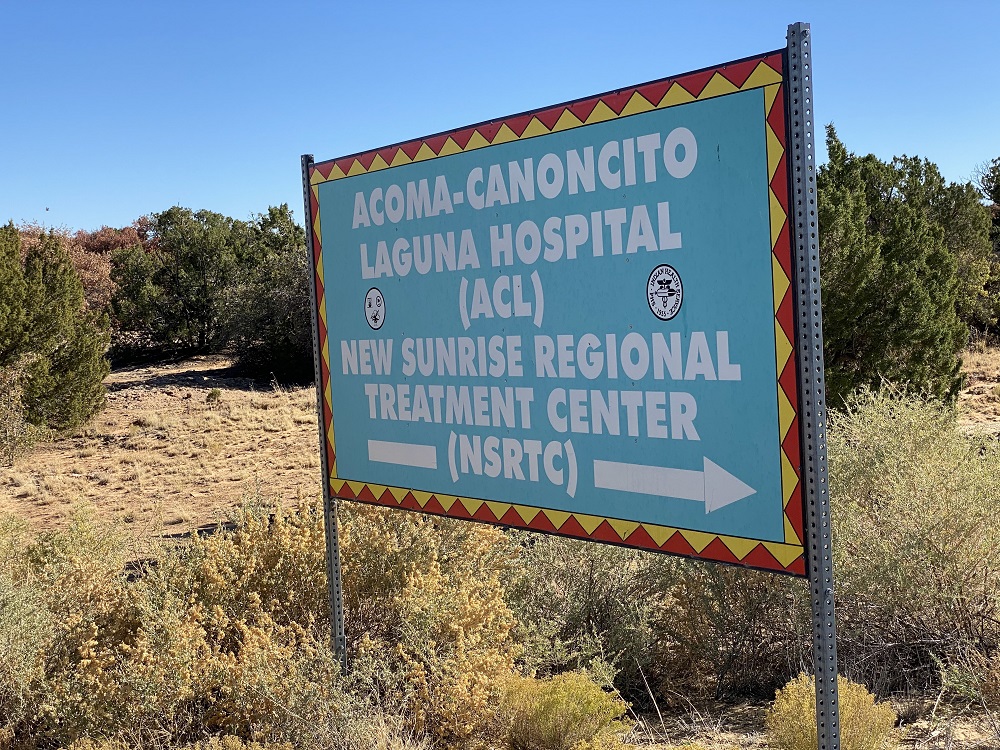 Acoma Pueblo Governor Brian Vallo said the federal government did not consult with pueblo leaders before deciding to end most of the healthcare services offered at a regional medical facility that serves roughly 9,000 Indigenous residents.

Indian Health Service (IHS), which sits under the U.S. Department of Health and Human Services, recently suspended most of the services offered at the Acoma-Cañoncito-Laguna (ACL) unit, including inpatient critical care and emergency room services, converting the facility into a “limited hour urgent care,” according to a press release from Acoma Pueblo. The facility will still offer COVID-19 testing, but will no longer accept patients or offer emergency room services.

The facility serves Indigenous communities of Acoma Pueblo, Laguna Pueblo and the To’Hajiilee chapter of the Navajo Nation. The hospital serves roughly 9,000 Indigenous residents, and has a 25 inpatient bed capacity.

The suspension of services comes as COVID-19 cases surge across the state and hospital bed capacity has quickly been filled. Vallo issued a state of emergency declaration on Nov. 6 in response to the closure.

RELATED: State to reimpose shutdown starting Monday: ‘We are in a life or death situation’

“The closure of the Acoma-Canoncito-Laguna hospital by the Indian Health Services is one of the most devastating events to occur at our Pueblo, and could not have come at a worse time,” Vallo said during a press conference Monday. “This decision can only be described as reckless, immoral and simply unacceptable.”

Vallo said IHS decided to close the facility without any tribal consultation—which is mandated by law.

IHS Rear Admiral Michael Weahkee said in a statement sent Tuesday, after the publication of this story, that the ACL hospital “does not currently have sufficient staffing to provide inpatient and emergency department services.”

“During the ongoing pandemic, there is a nationwide shortage of healthcare providers making it difficult to fill these positions,” Weahkee said. [Read the full statement at the end of the story.]

Barbara Felipe, CEO of the ACL hospital, did not return a request for comment.

Vallo said the closure follows funding being pulled “to establish another Urgent Care Clinic in another tribal community.” But Vallo argued that the IHS could use CARES Act money or “provider relief funds” to keep the facility open at least until after the pandemic.

IHS received over $1 billion in funds through the CARES Act. Vallo estimates it would cost between $5 million and $6 million to keep the ACL facility open while providing full services.

“I have urged Congress to keep the hospital open and provide legislative relief and funding to protect the people of Acoma from undue harm,” Vallo said. “This situation has become a serious matter of life or death here at Acoma—and one that cries out for resolution, especially now when COVID-19 is out of control. I ask that the Indian Health Service honor and uphold its obligations and reinstate the health care my people deserve.”

“Our community has lost lives to COVID-19. If we lose ready access to the critical health care services and diagnostic testing capabilities at ACL, more lives will be lost,” he said.

No tribal consultation ahead of closure

Vallo said IHS alerted the Pueblo earlier this year to possible changes to the services offered by the facility down the road, in response to the loss of funding. But Vallo said the funding in question will be removed in February 2021.

“We anticipated some of these eliminations of services, but not until the $5 million-plus would leave the facility, in the early part of next year,” he said.

“Federal law requires a year advance notice to Congress before closing a hospital to prevent exactly what is happening now with ACL,” Vallo said, but the decision came “without any meaningful consultation with me, my administration, or my tribal council,” he said.

“Now, the Indian Health Service has not communicated directly to us at this point. There has not been any real meaningful consultation,” Vallo said.

He added that the Pueblo of Acoma adamantly opposes a full closure of the hospital and the Pueblo insists that the IHS “fulfill its trust responsibility.”

Vallo and Tonya Louis, the Executive Director of Acoma Pueblo’s Public Health and Human Services Division and co-commander of the Pueblo’s Health Command Center, said the closure will force individuals who may have COVID-19 or other serious illness to travel to Grants or to Albuquerque to access medical care, at a time when hospitals are quickly becoming overwhelmed during the pandemic. Elected officials and state health officials have urged New Mexicans to not travel if at all necessary

“I was crushed when I learned that Indian Health Services was shutting down our hospital. I just really couldn’t believe it, especially during a time of a pandemic. It made no sense, especially now with the coronavirus raging across the state, and around the country. I don’t understand who does this, and why,” Louis said.

Louis said she herself contracted COVID-19 and was turned away from care at the ACL hospital.

“I had no other choice but to have my husband take a risk, [risk] his own well being and safety, and drive me to a nearby hospital,” Louis said.

The second hospital also turned her away, so her husband drove her to Albuquerque, where she said she had to wait several hours before receiving care.

Louis pointed to the difficulties rural communities face in accessing healthcare, and said those difficulties are being exacerbated by COVID-19.

“Many rural hospitals—including ACL—didn’t have the large number of intensive care beds, ventilators and staff that are required to care for the severely ill COVID-19 patients, with hospital beds filling up in nearby cities and towns,” she said. “At least we had something within our community that we could rely on for inpatient care. But now we have nothing.”

The nearest facility, the Cibola County General Hospital in Grants, only has three ICU beds, Vallo said. And Louis said that some tribal members may not have the means to travel to Grants or Albuquerque to healthcare, or they may not have insurance to cover the costs.

Acoma Pueblo has issued a quarantine order, which means that any tribal member who leaves the Pueblo to receive medical care will need to quarantine for 14 days when they return to the Pueblo.

“The Pueblo does work alongside primary care providers to ensure that we’re being consistent in terms of time that individuals are required to quarantine,” Louis said. “In addition to that, we work very closely with the [New Mexico Department of Health] to ensure the consistency and care for individuals who are returning back to the Pueblo, from any care that they’ve received in terms of COVID-19 diagnoses.”

The IHS decision was quickly condemned by members of the state’s congressional delegation.

“This pandemic does not discriminate, and its toll in communities of color has revealed the long standing disparities that exist in Indian Country. This administration is putting lives in danger and needlessly increasing patients’ and families’ distress,” Haaland said. “I’ll be looking into this decision, and expecting answers from HHS.”

Haaland is an enrolled member of the Laguna Pueblo.

U.S. Senator Udall, who is vice chairman on the Senate Indian Affairs Committee, criticized the federal government’s treatment of Indigenous populations during the pandemic.

“Tribes across the country have met this crisis with resilience, but their federal partners aren’t rising to the challenge,” Udall said in a statement. “It’s wrong. It’s dangerous. And, it’s a complete dereliction of duty. IHS needs to provide clear, direct answers about where the people of Acoma, Laguna, and To’hajiilee are going to be able to access emergency and hospital care during this public health crisis.”

Louis pointed to health disparities that exist within tribal communities, and noted that Native Americans have been disproportionately impacted by COVID-19.

“The IHS supports tribal self-determination and self-governance to strengthen the government-to-government relationship between the United States and Indian tribes. The IHS respects the choices of tribes to assume the responsibility of providing health care services to their communities in accordance with federal law.

On September 29, 2020, the IHS Albuquerque Area entered into an agreement with the Laguna Health Corporation, for the corporation, on behalf of the Pueblo of Laguna, to administer and deliver a variety of programs, functions, services, and activities currently provided by the IHS Acoma-Canoncito-Laguna Service Unit, pursuant to Title I of the Indian Self-Determination and Education Assistance Act. The assumption date is February 1, 2021, when the Laguna Health Corporation is scheduled to open a new health center for citizens of the Pueblo of Laguna.

Since the IHS received the Pueblo of Laguna’s proposal in July, the IHS has met with leaders from all affected tribes to inform them of the contract proposal and to begin discussions on the potential impact to operations and related health services.

With the reduction in federally operated programs, functions, services and activities, and accompanying funds, the IHS will redesign programs and services provided at the service unit. This redesign will be done in consultation with all affected tribes, including the Pueblo of Acoma.

To prepare for this transition, the IHS began the process of notifying employees that under the Indian Self-Determination and Education Assistance Act, a contracting tribe or tribal organization may elect to (1) directly hire IHS employees, (2) offer temporary assignment of Federal employees under an Intergovernmental Personnel Act agreement, or (3) request assignments of USPHS Commissioned Officer personnel assignments through a Memorandum of Agreement. The tribe or tribal organization may also elect to hire qualified individuals from the general public. In response to this process, a number of IHS employees and contractors have notified the agency of their intent to retire, resign, or transfer to other facilities.

As a result, the Acoma-Canoncito-Laguna Service Unit does not currently have sufficient staffing to provide inpatient and emergency department services. During the ongoing pandemic, there is a nationwide shortage of healthcare providers making it difficult to fill these positions. Primary Care and Urgent Care Services will continue to be provided at the Service Unit.

The IHS is committed to providing the retained services to the Pueblo of Acoma with the associated funding that will remain at the ACL service unit.

The Indian Health Service respects tribal sovereignty and is committed to tribal self-governance and self-determination. IHS recognizes that tribal leaders and members are in the best position to understand the health care needs and priorities of their communities. Today, over 60 percent of the IHS appropriation is administered by tribes, primarily through self-determination contracts or self-governance compacts. The number of Tribal health program success stories grows each year, and the IHS supports this success by offering information, technical assistance, and policy coordination. We value our partnership with the tribes we serve and look forward to continuing to work together to provide access to comprehensive, high quality health care for American Indians and Alaska Natives.”

CORRECTION: An earlier version of this story contained a typo that referenced “alcohol” instead of “Acoma.” We deeply regret the error.