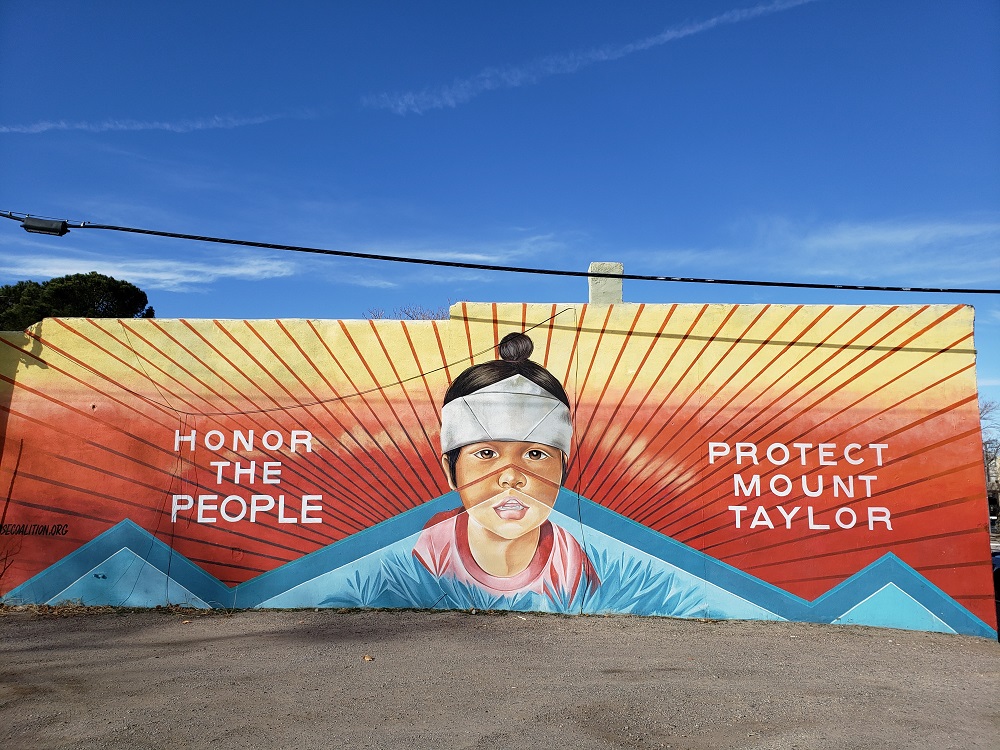 Thursday night, a group of Indigenous community leaders gave presentations about the legacy of uranium mining in the state that still threatens the health and environment of their communities, decades after the last mines ceased operations.

From the 1940s through the early 1990s, New Mexico produced roughly 70 percent of the uranium in the United States, which was used in nuclear weaponry during the Cold War. Members of Indigenous communities across the state did most of the dangerous mining of the radioactive material, and those communities are still struggling to hold the federal government accountable for cleaning up the toxic contamination that was left behind.

“We felt that there were a large portion of our communities across the state that still remain largely unaware of the major environmental justice impacts that uranium continues to have on so many individuals—especially our Indigenous communities—across the state,” said Virginia Necochea, executive director of the New Mexico Environmental Law Center (NMELC), which organized the online event.

“It’s very important that we recognize that there are hundreds upon hundreds of abandoned mines, unsealed pits, mine entrances, tailing ponds, waste piles, highly radioactive materials and toxic chemicals from uranium mining and milling, many that have yet to be cleaned up and continue to pose significant health threats,” Necochea said. “This continued uranium contamination that we witness, and that our communities continue to face, is a clear example of environmental racism and an environmental injustice that continues.”

A state of sacrifice zones

Much of the uranium mining that occurred in New Mexico was on tribal lands and was performed by tribal members. The Grants Mining District and the nearby Navajo Nation is home to one of the country’s most productive uranium belts, and the region was one of the most intensely-mined areas in the U.S., according to Manuel Pino, a member of Acoma Pueblo and an organizer of the Laguna-Acoma Coalition for a Safe Environment (LACSE). Today, there are more than 1,000 remaining uranium mines on the Navajo Nation that have not been reclaimed or remediated.

A number of remaining mines and mill sites remain in the Grants Mining District and in the San Mateo Creek Basin that have not been fully remediated yet and continue to impact groundwater resources that the surrounding communities rely on for drinking water.

RELATED: An inactive uranium mine located on a sacred mountain will finally close

Further south, Laguna Pueblo is home to the world’s largest open pit uranium mine. The mine is located just 2,000 feet from the Laguna village of Paguate.

“For 30 years this was a constant operation, 24 hours a day, 365 days a year. Meanwhile, when our winds would blow, it would blow these contaminants right into the village,” Pino said.

Pino said Indigenous communities are treated as sacrificial zones by the federal government, where companies are allowed to come in, mine the natural resources of the area, profit from those resources while leaving a toxic legacy behind. And historically, the communities themselves haven’t benefited.

He pointed to coal mining. Black Mesa is home to one of the largest coal veins in the country at Black Mesa. The area has seen “some of the dirtiest operating power plants in the history of coal-fired generation,” Pino said.

“A lot of this power that went to Western states and other regions of the U.S. were a result of electrical transmission,” he said. “Meanwhile, to this very day, about 20 percent of the Navajo Nation tribal members do not have the 21st century conveniences of electricity, running water [and] broadband internet.”

The federal government has a track record of delaying clean up and reclamation activities for these mines for decades after they’ve closed, said Gail Evans, staff attorney at NMELC.

Take the Homestake Mining Company uranium milling site, located in the Grants Mining District. The site was designated a Superfund site in 1983 after extensive groundwater contamination was discovered.

“Once it was named a Superfund site, supposedly, this process should have kicked in, that would have led to identifying the problems and identifying solutions and getting to work on those solutions,” Evans said.

But the cleanup project hasn’t made much progress.

“I can tell you that this [investigation process] was just completed last month,” Evans said. “So it took 40 years.”

The open pit mine in Laguna Pueblo is another example. The mine closed in 1982, but the federal government didn’t begin reclamation of the site until the 1990s. And it wasn’t until 2003 that the EPA began monitoring for contamination, according to June Lorenzo, who grew up in Paguate and is also an organizer at LACSE.

That mine was finally designated as a Superfund site in 2013, more than thirty years after it had closed.

“So, pretty late in the process,” Lorenzo said.

King said the impacted communities have not received just compensation for the incident, which sent millions of gallons of acidic, radioactive material through the waterways of the downstream communities. Most of the U.S. doesn’t even know it happened.

“Three Mile Island got more coverage than the UNC tailings spill, and I always contribute that to [the fact that] the UNC spill was in an Indigenous community, and therefore, no coverage at all,” King said. “Here we are, 42 years later, and we’re still trying to seek justice in any sort, any sort of compensation from the mining company or officials from the government.”

The Indigenous communities that were once the center of uranium production are still struggling with the health, environmental and economic impacts of the mining industry.

Necochea pointed to recent studies that found high levels of radioactive metal in Navajo women and infants, decades after mining had ended on their reservation.

Pino said the health disparities in Indigenous communities that are being highlighted right now by the SARS-COV-2 virus, are in some part the result of mining and energy development in the region.

“Many of those with underlying health conditions are directly related to energy development and living in contaminated communities,” Pino said.

Terry Keyanna, a member of the Red Water Pond Road Community Association, said it’s time for the federal government to take Indigenous communities and their health and well-being seriously.

“We’re really tired of lies. We’re tired of sitting on promises. It’s unfortunate because we are the first people on this land and it’s not fair to us. We’ve been here and we’ve been teaching and we utilize the land in a respectful way,” Keyanna said. “We have to raise our voices in this way to finally get somebody to listen to us and get organized. I don’t understand why we are considered a sacrifice zone.”

“I started this work as a young man. And now, now I’m an old man,” he said. “I had hoped in my lifetime that I would see improvements. But the legacy continues, the ignoration of this government continues. And it has to stop.”