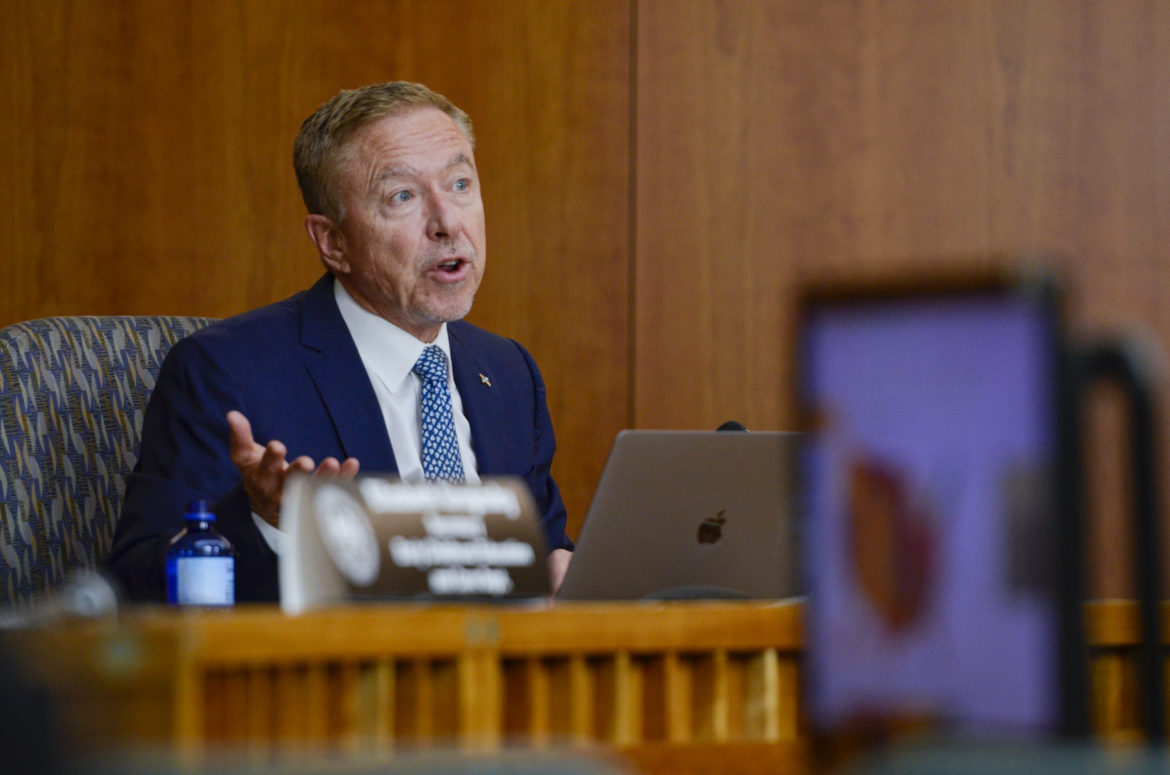 Human Services Director David Scrase goes over the latest data for New Mexico on Thursday at the Capitol during a news conference covering the state’s COVID-19 response.

New Mexico has a record-breaking 1,007 individuals in the hospital, according to New Mexico Human Services Secretary Dr. David Scrase.

Scrase provided that number during a webinar Tuesday to discuss more in-depth the crisis standard of care. The state experienced technical difficulties, which meant that the event was not aired live over social platforms and that the state could not provide its daily update on additional COVID-19 cases and deaths.

Scrase said the state will officially go into the crisis standard of care at hospitals before the end of the month.

“In terms of timing, we’re here today because it could be very soon. We’re thinking this month. We’re thinking we’re on the threshold. The trajectory in some big hospitals suggest it could

absolutely be that we have to deal with this between now and the end of the year,” Scrase said.

Both Gonzales and Richards called the situation “unprecedented” but Scrase said that the state struggled a century ago during the 1918 Spanish flu.

All three repeatedly praised the fact that New Mexico hospitals are working collaboratively and have created what they call a “hub and spoke” system that allows hospitals to transfer patients to another hospital that has room.

But, when the state reaches the crisis standard of care, providers will ration care based on a criteria that has already been established. The state’s criteria is based on national criteria established in the 2000s out of concern that the nation’s hospital system might encounter an influenza pandemic, Richards said.

Richards said the decision of who will potentially receive rationed care is about the likelihood of a patient benefiting from the resource. He called it “very intentional” and said it’s not based on race, gender, religion, age, ethnicity, social status or what Richards called “societal value,” meaning one patient deemed more essential as a worker than another.

She said if every ICU bed is full and a patient at a small, rural hospital presents with COVID-19, a serious need for oxygen, has chronic kidney disease, is on dialysis and has a cancer with a very low survivability rate, that patient would be scored as not the highest priority patient but not the lowest either with no likelihood of survivability.

She said that in such a scenario, the rural hospital would seek a bed in another hospital to transfer that patient.

“The tool itself is as free from bias as possible,” she said.

Gonzales said communities should feel reassured that hospitals will still “take great care of you.”

Scrase said the state will switch into the crisis standard of care when the New Mexico Department of Health makes the formal declaration.

“Many ICUs have 100 percent [capacity] COVID patients or 100 percent are on ventilators in ICU units. It can be daunting,” Scrase said.

“We need for the community to do those things we’ve talked about all along,” Gonzales said.