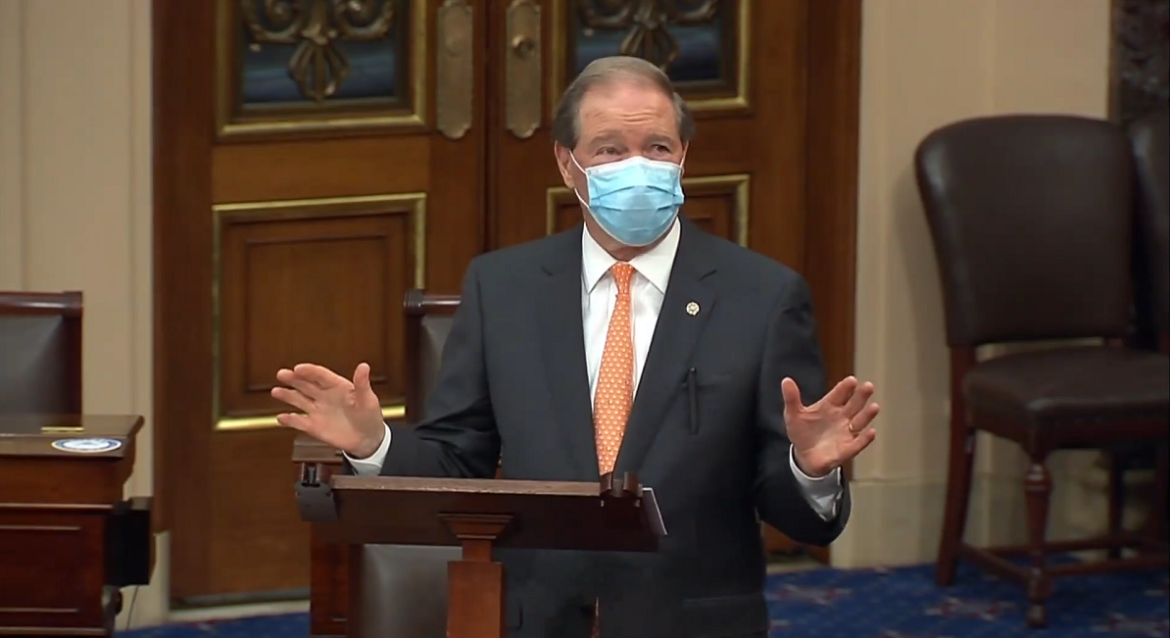 U.S. Sen. Tom Udall gave his farewell speech from the Senate floor Tuesday, as he approaches the end of his 12 years in the U.S. Senate. Udall delivered a series of calls to action in his remarks and criticized the Senate for inaction on a wide range of issues, from COVID relief to police reform and climate action.

Udall’s emphasis on collaboration and bipartisanship in drafting and passing legislation has come to define his career in the Senate. But Udall lamented the divisiveness he sees today in the Senate during his remarks.

“The system we’re caught in makes it too hard to work together, to remember that we disagree in politics, but not in life,” he said.

“We are becoming better and better political warriors. We’re good at landing a punch, exposing the hypocrisy, riling each other up. But we aren’t fostering our better angels,” Udall said. “Our peacemaking skills are atrophying. Every hurt takes time to heal and each time we hurt each other, it sets us back. Unfortunately, the structures we have built reward us for hurting one another. We need to reform those structures or we’ll never make progress we need to make.”

Filibuster was a ‘historical accident’

Udall has been a long-time critic of the Senate’s use of the filibuster to prevent legislation from passing. Udall continued that charge during his farewell address, in which he characterized the filibuster as a “historical accident” that is now “woven into the institutional framework” of the Senate.

Udall pointed to several important issues that he said the majority of Americans support, including healthcare reform, COVID relief, police reform and racial justice and other issues that “don’t see much progress in the Senate.”

“People are losing faith in the system—rightfully so. We have to do something to fix this,” he said. “If we are to take the bold action necessary to tackle the urgent problems before us, we must reform our democracy. We must make it easier to vote. We must end the dominance of big money. We must root out corruption. And we do not have any time to waste.”

Udall expressed admiration and support for the younger generations that have become politically engaged over issues such as police reform, racial and environmental justice and climate change. He argued that many of the social justice issues facing the country are tied to action on climate change.

“I believe this nation has arrived at a moment when we are opening our eyes. To the enormous challenges before us—and also to their solutions,” Udall said. “Our planet is in crisis, facing mass extinction and climate change. Our people are in crisis, ravaged by a pandemic that has laid bare the inequities of our society. And our democracy is in crisis, as the people’s faith in their government is shaken.”

“We cannot solve one of these crises without solving the others,” he said.

Udall highlighted his record on conservation, which he said is “something of a family project.” Udall’s father, Stewart Udall, served as Secretary of the Interior under presidents John F. Kennedy and Lyndon B. Johnson. Udall is reportedly pushing for the Interior Secretary position in the incoming Biden-Harris administration.

“Our nation is facing dual climate and nature crises of epic proportions. Earlier this year, much of the American West was engulfed in wildfire,” he said. “We lose a football field’s worth of nature every thirty seconds. A million species are at risk of extinction because of human activity.”

“Protecting nature is about protecting humanity. It’s that simple,” Udall said. “And marginalized communities—communities of color, low-income communities and Indigenous people—are bearing the worst consequences of the environmental destruction and pollution caused by the rich and powerful. We have the power to solve these crises. The power, and the obligation. All it takes are clear eyes and political will. And remembering that we may disagree in politics, but not in the future that we want for our children.”

Udall touted the bipartisan work he took part in during his 12 year long career in the Senate, mentioning Republican Senate colleagues Mitt Romney of Utah and Lisa Murkowski of Alaska and former colleagues David Vitter of Louisiana and John McCain of Arizona. He also lauded the passage of bipartisan legislation, including the Frank R. Lautenberg Chemical Safety for the 21st Century Act and the Great American Outdoors Act.

The Frank R. Lautenberg Chemical Safety for the 21st Century Act, named after the former U.S. Senator from New Jersey and signed into law in 2016, revamped the Toxic Substances Control Act of 1976. Udall described the bill as “the biggest environmental reform in a generation.”

“It was hard work. It took years. But if you can get a project where [Republican] Jim Inhofe and [Democrat] Ed Markey are working for the same goal, you can get a lot done around here,” he quipped.

Udall also emphasized the importance of collaborative work on climate action and conservation, as highlighted in the passage of the Great American Outdoors Act, which permanently funded the Land and Water Conservation Fund.

“Enacting the Great American Outdoors Act, at a time of immense division, is a tremendous feat,” he said. “And it tells us a lot about what we’re capable of. It tells us that conservation is popular, a political winner, [and] environmental protection can be an area of cooperative action. It must be if humanity is to survive and prosper.”

Udall has held an elected position continuously for thirty years. He was Attorney General for the state from 1991 and 1998. Udall’s congressional career then began in 1999, when he became the U.S. Representative for New Mexico’s Third Congressional District. He held that position until 2009 when he joined the Senate, replacing longtime Republican Sen. Pete Domenici, who did not run for reelection because of health issues.

In March 2019, Udall announced he would not seek reelection in 2020, marking an end to his 30 years of holding an elected office.

Colleagues commemorated Udall’s time in the Senate on Tuesday. U.S. Sen. Martin Heinrich praised Udall’s years of public service and his ability to find common ground and overcome political obstacles, in a separate speech on the Senate floor Tuesday.

Heinrich recounted a horseback ride he and Udall took with then-Interior secretary Ryan Zinke to the Sabinoso Wilderness in northeastern New Mexico.

“A couple hours of both of us riding into Canyon Largo alongside Secretary Zinke, local sportsmen, public lands advocates, and community leaders accomplished what months of testy congressional hearings and office meetings here in Washington could not,” Heinrich said.

“This story is just one example from Senator Udall’s long career that demonstrates how bringing people together—even those who may have major disagreements—can still help you find some common ground and forge a productive path forward,” he said. “That’s one of the main lessons that I will take with me always from the example Senator Udall sets as a principled leader.”