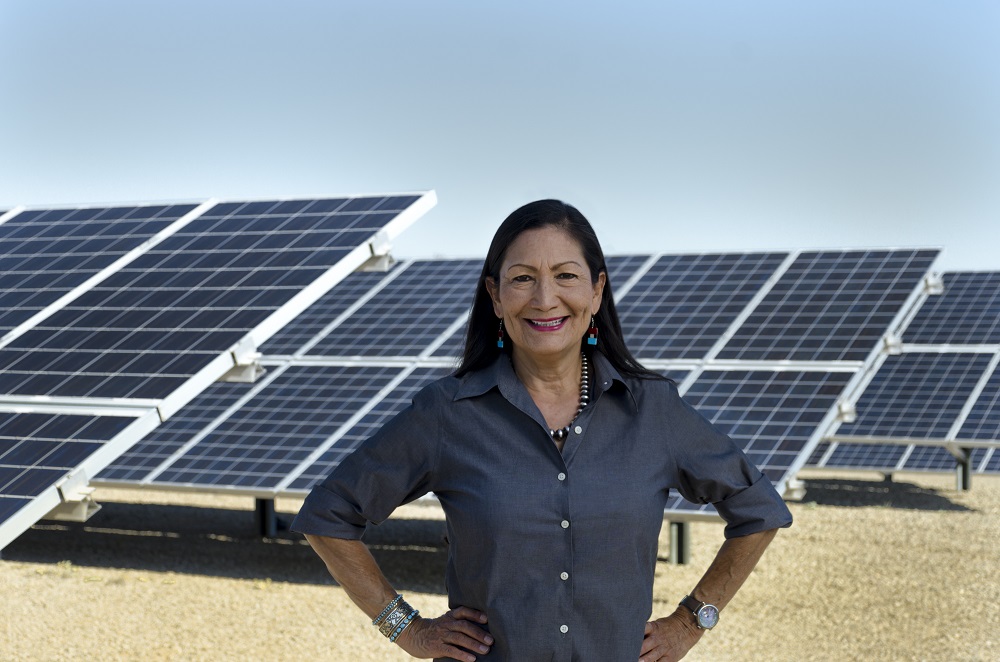 President-elect Joe Biden will name Deb Haaland as his nominee to head the U.S. Department of the Interior, according to a report by the Washington Post on Thursday, ending weeks of rumors and pushes by various factions in the form of anonymous quotes and leaks.

If confirmed, Haaland would be the first Native American to hold the key position regarding public lands and environmental issues throughout the country.

Haaland is a member of the Pueblo of Laguna, one of New Mexico’s 23 federally recognized tribes and pueblos.

Tribes have long had tensions with the Interior Department, over things like oil and gas drilling.

Haaland has spoken about a transition from oil and gas energy to renewable energy production, including on public lands. The Biden administration has mentioned addressing climate change as a key issue.

The Interior Department also oversees the country’s designated wilderness areas, national monuments and wildlife refuges and is in charge of enforcement of the Endangered Species Act.

The Bureau of Indian Affairs is also part of the sprawling Interior Department.

In recent days and weeks, progressives and Native organizers have pushed for Haaland to be named to the key public lands position.

And earlier this week, Speaker of the House Nancy Pelosi said she would back Haaland’s selection, despite a very narrow majority in the House.

Gov. Michelle Lujan Grisham said in a statement that it was “a proud day for indigenous peoples everywhere, not least in New Mexico.”

“Rep. Deb Haaland is a woman of integrity, tenacity and heart. She is a leader, a fighter and a tireless advocate,” Lujan Grisham said. “A proud daughter of Laguna Pueblo, she has made it her life’s work to represent and deliver for not only her home and her people but the interests of everyone â€“ she stands for all New Mexicans, for a just and equitable society and a better future for all of us. “

“President-Elect Biden has chosen an outstanding leader in Congresswoman Haaland, and I am confident that she will be both a historic Interior Secretary and an excellent one,” he said. “She will undo the damage of the Trump administration, restore the department’s workforce and expertise, uphold our obligations to Native communities, and take the bold action needed to tackle the accelerating climate and nature crises.”

“By picking Congresswoman Deb Haaland as his Interior Secretary, President-elect Joe Biden is making both a strong and historic nomination. The Congresswoman has a proven record of standing up for our environment, creating opportunities for Americans to enjoy the great outdoors, and fighting to ensure that America keeps its commitments,” he said. “As Chair of the Subcommittee on National Parks, Forests and Public Lands, she held the Trump administration accountable for its efforts to undermine public lands and environmental protections. I know that she will act to undo the damage caused by the Trump administration.”

U.S. Sen. Martin Heinrich said he was “pleased” at the nomination.

“I will sleep better at night knowing that the strong relationship I have with Congresswoman Haaland and our shared vision for public land management and trust obligations to our First Nations will allow us to undo the damage caused by the Trump administration and accomplish so much for New Mexico and the entire country,” he said. “Given the desire of Americans for outdoor recreation, environmental justice, climate solutions, preservation of wildlife, clean water and rural economic development, I’m optimistic she will reorient the Department of the Interior towards those forward-thinking objectives.”

Haaland was previously the Democratic nominee for lieutenant governor in 2014, when Republican Susana Martinez easily won reelection, defeating Democratic Attorney General Gary King. She was also the first Native American to be the chair of the Democratic Party of New Mexico.

Trump still maintains that he is contesting election results, even as his campaign legal team racks up dozens of losses in court. The Trump campaign has also sued over election results in New Mexico, a state he lost by nearly 100,000 votes.

Lujan Grisham is also a co-chair of the Biden transition, and was reportedly under consideration for the position of Secretary of Health and Human Services. She also was reportedly offered the Secretary of Interior position, but declined the nomination.

The position of Secretary of the Interior is subject to confirmation by the U.S. Senate. Republicans hold a 50-48 majority in the chamber, with two more seats to be determined on Jan. 5, in a Georgia runoff election. If Democrats win both seats, the Democrats will effectively have a very narrow majority, with Vice President Kamala Harris as a tie breaking vote.

If Haaland does leave her U.S. House seat, it would trigger a special election for Haaland’s replacement. It would be New Mexico’s first special election for a congressional seat since 1998, which was also in the 1st Congressional District and was triggered after U.S. Rep. Steve Schiff died while in office. Republican Heather Wilson won the expensive special election, defeating Democrat Phil Maloof and Green Party candidate Bob Anderson.

Other New Mexicans were also placed on media shortlists for the Interior position, including both U.S. Senators, Martin Heinrich and Udall. Udall is retiring from the Senate after two terms. His father, Stewart Udall, was a Secretary of the Interior under presidents John F. Kennedy and Lyndon B. Johnson.