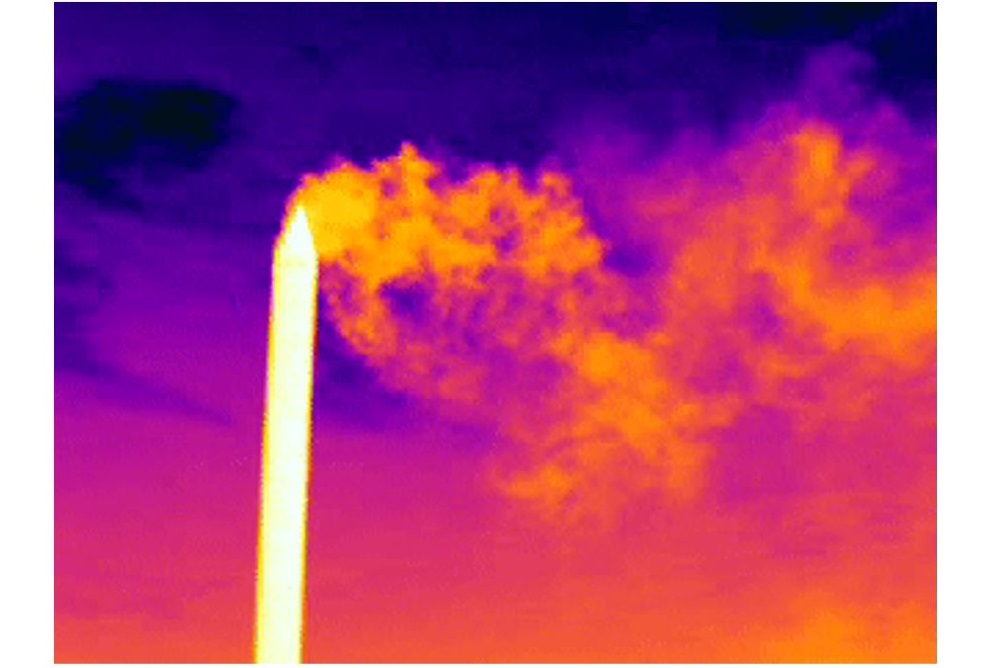 Methane and volatile organic compounds (VOCs) venting captured by Earthworks' Nathalie Eddy in November. This equipment is located in the San Juan Basin and is owned by Hilcorp.

Dave Rogers is a reverend in Carlsbad and founder of the group Citizens Caring For the Future. The group started, he said, out of concern in the community about the environmental and health impacts of oil and gas development that was booming in the New Mexico side of the Permian Basin—until the COVID-19 pandemic and the oil market downturn brought production to a near halt in 2020.

“[We] began to realize we could not continue just allowing this to happen. We were concerned for our health, for our land, for our environment, for our planet,” Rogers said during a recent webinar on methane emissions in the state. The group now advocates for “reasonable, responsible regulation and credible enforcement,” Rogers said, “because none of those things exist in the Permian Basin right now.”

Right now, his group is focusing on making sure the new methane and emissions rules being developed by the state’s two regulating bodies are stringent enough to curb the state’s exploding methane emissions. Some state legislators have recently floated the idea of delaying implementing any new emissions-focused regulations on oil and gas companies until the industry—and the state’s budget—has recovered from the downturn.

Narratives about oil and gas in New Mexico often focus on the economic benefits that industry has brought and proponents often argue that any new regulations, or transitions away from fossil fuels will threaten the state’s future.

“The suggestion that what we’re doing is trying to steal people’s jobs and take money from the schools and upset the state’s financial solvency creates a matter of fear,” he said.

Camilla Feibelman, director of the Rio Grande Chapter of the Sierra Club, which organized the webinar, said the climate change stakes for getting the proposed methane regulations right are higher than ever.

“This is a huge climate impact for not just New Mexico, but the whole globe,” Feibelman said. “Right now, a quarter of the global warming that we’re experiencing is caused by methane emissions. And emissions from oil and gas are at least 60 percent higher than previously measured.”

There are economic ramifications of methane leaks, too, she said.

“We’ve got a pollution issue, we’ve got a waste issue—and it impacts our economy,” Feibelman

said. “When this stuff is leaked or vented or flared, royalties don’t come to the federal government and to the state. That’s money that we could use to really improve our performance on the educational front and in other aspects of our New Mexico economy.”

‘The pollution is everywhere and all the time’

New Mexico’s methane problem has steadily grown alongside oil and gas development in the state’s two energy-producing basins. A recent report from Gov. Michelle Lujan Grisham’s Climate Change Task Force found New Mexico produces more than twice the national average of greenhouse gas emissions per capita, with more than half of that coming from the state’s oil and gas sector.

“The trouble is that it’s not really all that easy to predict where methane leaks and in New Mexico 60 percent of our methane pollution is coming from leaks,” Feibelman said.

Nathalie Eddy, Colorado and New Mexico field advocate at Earthworks and a certified thermographer, has been documenting methane venting and leaks in the Permian Basin using optical gas imaging cameras.

“This is what regulators and operators use to inspect their sites and look for emissions that are coming from these sites. We are trained alongside the operators and regulators to use these cameras,” she said. “In large part, we are responding to requests from community members who are living in these areas, who have seen or smelled or heard something that was of concern. And so we map these out.”

Eddy recently completed field work in the San Juan and Permian basins in November, where she said she documented plenty of methane being released into the atmosphere.

“We’ve caught quite a few and really significant emission events in the Chaco area in the past. Last month was more of the same,” she said, adding that she also documented several concerning emissions in the Permian Basin.

At one site, Eddy said she witnessed two workers being exposed to emissions as they conducted work on some equipment.

“We could see them being directly exposed and none of them were wearing any kind of protective respiratory equipment. As we’re sitting on the county road, we were getting exposed to gas and not feeling well and did not stay there, so I can’t imagine what they were experiencing with that proximity and duration,” she said.

Eddy said her thermographer fieldwork in the state has shown her that emissions are occurring—whether regulators know it or not—nearly everywhere oil and gas extraction is occurring.

“The pollution is everywhere, and all the time,” Eddy said. “[There’s] a lot of repeat sites, it’s big sites and small sites, old sites and new sites, bigger operators and small operators.”

New Mexico has only 11 inspectors between the New Mexico Environment Department (NMED) and the Energy, Minerals and Natural Resources Department (EMNRD), overseeing 57,000 oil and gas wells in the state across federal, state and tribal lands and private property.

Eddy and others fear those departments are unable to manage regulatory duties with so few inspectors. Both departments had their budgets pared down dramatically during the Susana Martinez administration, and are now working to rebuild those budgets.

“The New Mexico regulators are sorely outnumbered, and limited in what they can do,” Eddy said.

She said in the past two and a half years, Earthworks filed 108 complaints to NMED about emissions at oil and gas sites.

NMED spokesperson Maddy Hayden told NM Political Report that the department “does not have the staffing resources to send an inspector to each of the facilities identified in a complaint but does prioritize complaints based on imminent threat to public health, type of event, duration, magnitude, and severity.”

Hayden said NMED spends “hundreds of staff hours each month responding to air quality complaints,” often by phone and email, and that determining if an observed plume is the result of an unlawful emission “takes significant staff time.”

“This review does not always result in a finding that the plume could potentially be a violation of an air permit or regulation,” Hayden said.

But NMED does issue letters of potential violation to operators who are subjects of complaints—something that Eddy praised.

“It’s significant because it shifts the burden to the industry to prove they are in compliance rather than the onus being on communities to prove their harm,” Eddy said.

State legislators are growing increasingly concerned about the budgetary fall-out from the COVID-19 pandemic and the downturn in the oil market. All executive state agencies have been asked to accommodate a 5 percent reduction in budget proposals for Fiscal Year 2022, which will begin next July.

In the meantime, legislators have warned that imposing new regulations will further imperil the state’s budget.

Sen. George Muñoz, D-Gallup, warned during a recent Legislative Finance Committee hearing that the new regulations will spur industry to “pull back” from energy production in the state.

“I think we have to take a step back and [use] extra caution, because if we make changes to industry in regulations—in any way, shape, or form—industry usually pulls back and relooks at what they have to do, and how their profit margins are operating,” he said.

But Jon Goldstein, director of regulatory and legislative affairs at the Environmental Defense Fund, said the state is losing money by allowing natural gas to be vented and flared.

“The best current estimates are every year, about 1.1 million tons of methane are released from oil and gas sites in New Mexico. To put that into context, that is about $271 million worth of natural gas, every year,” Goldstein said. “If the state were capturing that and putting it to good use, that would be about $43 million a year, every year in additional revenue to the state budget. That’s particularly important right now.”

And ultimately, Feibelman said, it’s time for the state to break away from volatile energy markets.

“Oil and gas also really keeps us in a boom and bust cycle that destabilizes our approach to pressing problems like poverty, education and health care,” she said. “So there’s a real need to figure out how to create a stabilized economy for ourselves.”