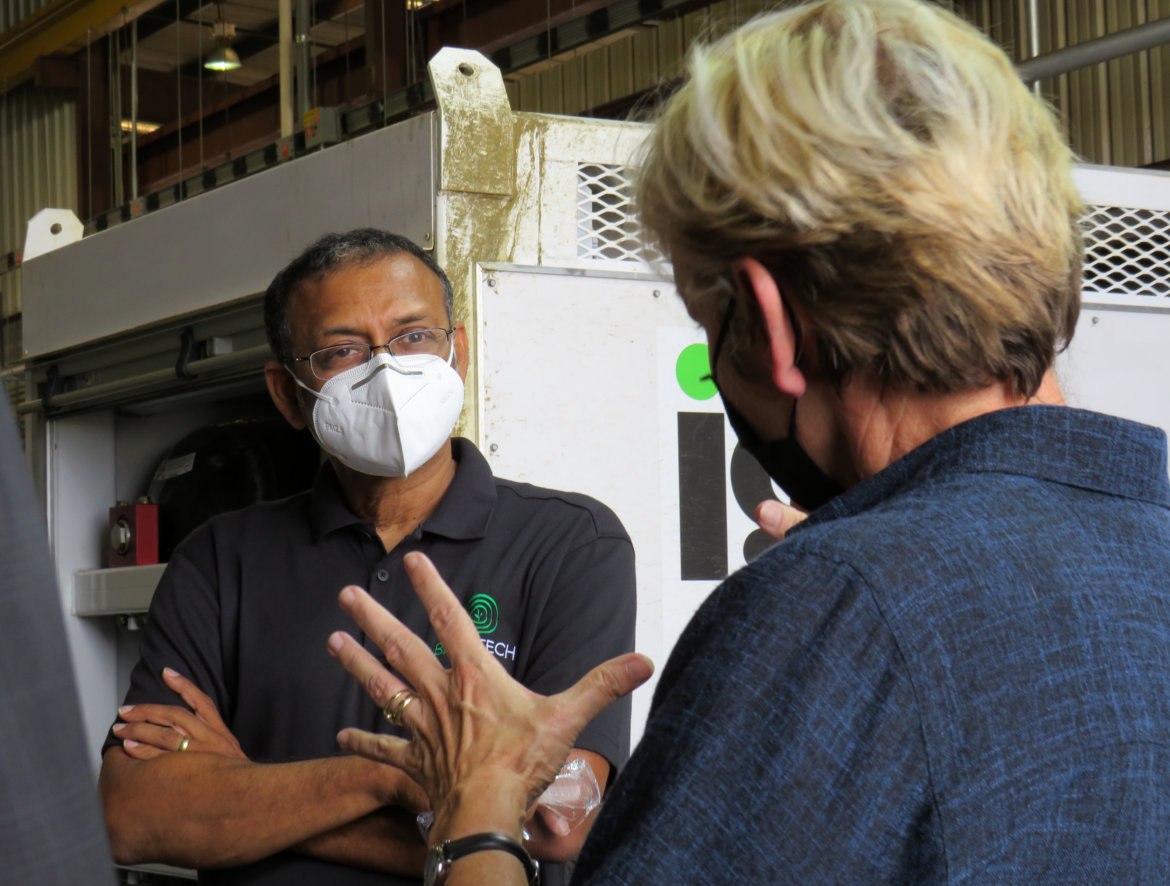 The United States and countries around the world are eyeing hydrogen as a source of clean, dispatchable power, but work is still needed to get to that point, U.S. Department of Energy Secretary Jennifer Granholm told NM Political Report while touring a facility in Farmington that manufactures blue hydrogen reactors.

Blue hydrogen uses methane derived from natural gas and splits the carbon from the hydrogen.

U.S. Senator Martin Heinrich, a Democrat from New Mexico, visited the PESCO facility with Granholm on Thursday as part of an energy transition tour following the Senate passage of a bipartisan infrastructure bill that includes funding for hydrogen projects, including at least four regional clean hydrogen hubs.

San Juan County leaders told Granholm that they hope the northwest region of New Mexico will be chosen as the site for one of these hubs.

San Juan County Commission Chairman John Beckstead said the county would like to become not only a hub for the hydrogen industry, but also a center of excellence for hydrogen in the United States. He said the county has the infrastructure in place as well as the ability to transmit electricity and a college that could train the workforce. Beckstead also highlighted current studies looking at sequestering carbon in geological formations near the San Juan Generating Station.

Granholm encouraged the county and industry leaders to submit an application for the demonstration facility, or regional hub, when the time comes and she said it will be a competitive process. The infrastructure bill is now waiting for approval from the U.S. House of Representatives.

San Juan County is particularly interested in the blue hydrogen, which would use natural gas as a source of methane. The carbon would be split off from the hydrogen and sequestered in deep, subsurface, saline aquifers.

Blue hydrogen is touted as a low-emission source of energy, however a study published in the journal Energy Science & Engineering last week raised questions about how clean blue hydrogen actually is. The study, authored by researchers from Cornell and Stanford universities, found that “the greenhouse gas footprint of blue hydrogen is more than 20 percent greater than burning natural gas or coal for heat and some 60 percent greater than burning diesel oil for heat” and the authors concluded “the use of blue hydrogen appears difficult to justify on climate grounds.”

“They are absolutely right,” she said. “Natural gas has to clean up its act on methane leakage and we’re working on that too. Our goal is to get clean hydrogen.”

“That’s why we launched an energy earthshot on hydrogen,” Granholm said.

The U.S. Department of Energy’s Energy Earthshot Initiative is intended to make clean energy more abundant, reliable and available within a decade by accelerating breakthroughs. The hydrogen earthshot was announced in June.

Granholm said the hydrogen earthshot aims to reduce the cost of hydrogen to one dollar per one kilogram in one decade.

Granholm said the study published last week is right about the emissions associated with blue hydrogen, but she said there are brilliant minds working on how to reduce the carbon intensity.

He said the study “kind of articulates what the path is to fixing that problem.”