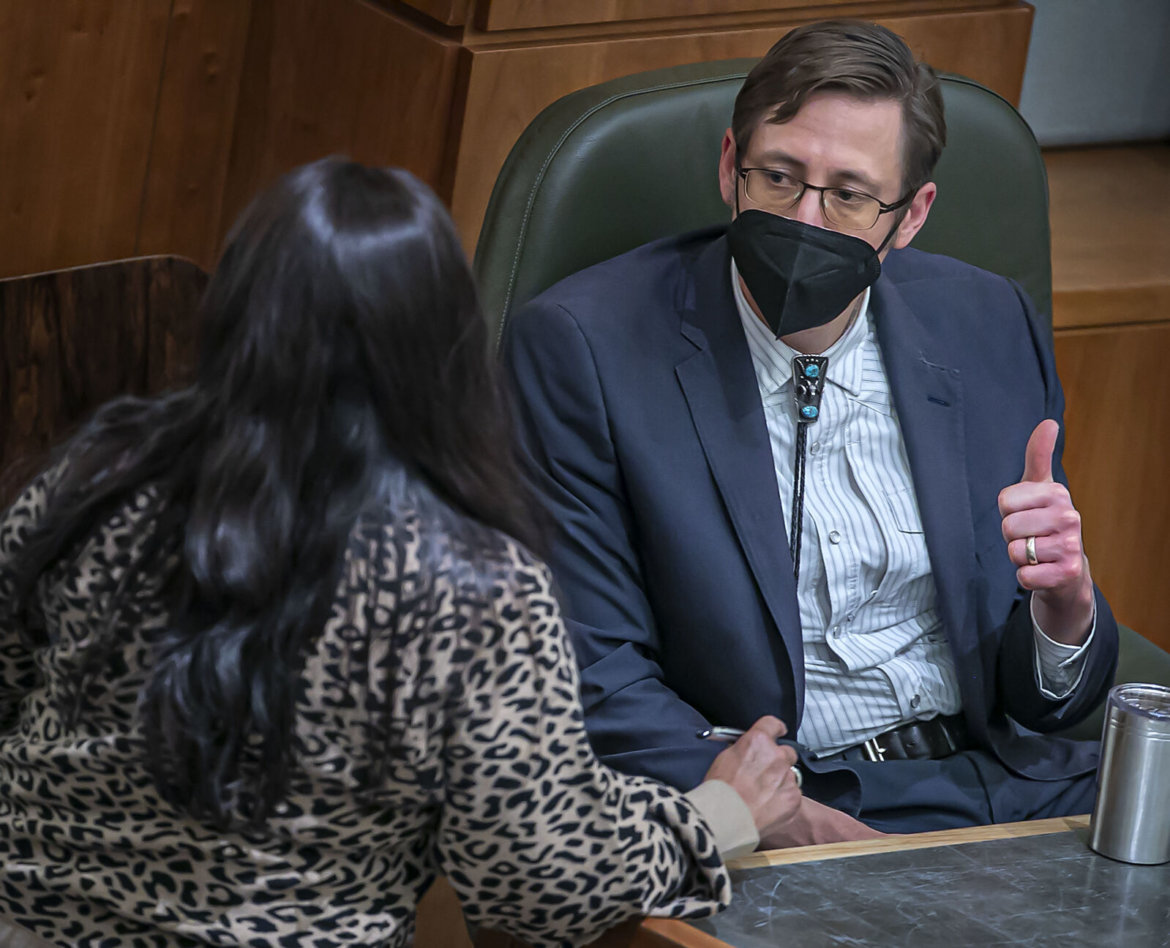 Rep. Nathan Small talks with fellow legislator Wonda Johnson during a house session on Feb. 1. Small is vice chair of the House Appropriations and Finance Committee, which put its stamp of approval on a record-high $8.47 billion budget.

Lawmakers have described the budget-making process in state government as a nightmare when times are lean.

But with projections of record revenues, due in part to expected growth in taxes, rebounding oil and gas markets and federal pandemic relief, one legislator likened New Mexico’s proposed spending plan for fiscal year 2023 as a dream come true.

On Tuesday, a key legislative panel put its stamp of approval on that plan — a record high $8.47 billion budget that would increase state spending by 13.8 percent, or roughly $1 billion, over the current fiscal year.

The House Appropriations and Finance Committee voted 15-3 to advance a substitute of House Bill 2, which includes average 7 percent salary increases for teachers and state employees and $25 million for evidence-based criminal justice reform initiatives, including stipends to hire new police officers. The proposal also leaves about $400 million for tax-related initiatives.

“For the 10 years that I’ve been on this committee, my level of frustration goes up and down based on the amount of revenue … we have to distribute,” said Rep. Christine Trujillo, D-Albuquerque. “This has been a really good year.”

“We will continue to advocate for a state budget that includes additional funding for the transformational investments in New Mexico’s future that our families deserve, including in higher education, public safety, hunger, and health care delivery,” Nora Meyers Sackett wrote in an email.

Reserves remain robust at $2.57 billion, or 30 percent of spending levels, under the proposed budget.

Concerns about the state’s financial future, though, weighed heavily on some lawmakers who worry about how long the good times will roll — and recalled days, not so long ago, when massive cuts had to be made.

“This is clearly a record high tide, but we all know the tide comes in and the tide goes out,” said Rep. Phelps Anderson, a Roswell independent.

The proposed budget calls for $145 million for lottery scholarships and $53 million for the Opportunity Scholarship program to provide free college tuition for the next five years.

In addition, the budget contains $319 million for transportation projects, including upgrading Cerrillos Road from St. Michael’s to St. Francis drives in Santa Fe.

Funding for public schools would grow to $3.87 billion, a nearly $425 million increase from the current fiscal year. In addition to average 7 percent salary increases for all school personnel, the budget provides additional compensation increases of 3 percent for educators in schools that participate in K-5 Plus and Extended Learning Time programs. There’s also a 2 percent increase in employer contributions to the education retirement fund to improve its solvency, though the higher employer contributions are subject to the passage of a bill the Legislature is considering.

The proposal boosts funding for higher education by $28 million.

“The higher education initiatives include telemedicine, equalization of funding for regional colleges and expanding nurse practitioner slots” at the University of New Mexico, said Bill Valdez, the committee’s chief of staff.

Valdez added the bill provides a 10.8 percent increase in recurring general fund revenue, with the aim of giving nearly 16 percent raises to state police officers, plus targeted pay increases for other positions that deal with violent crime. There also is about $700,000 for the Law Enforcement Academy Board, which oversees officer training certification and misconduct allegations for police statewide.

“It’s clearly a record budget that carries not only record appropriation but also carries a great deal of change for New Mexico in education, law enforcement [and] in our various health initiatives as we recover from the pandemic,” he said.

But Republicans who voted against the budget proposal questioned whether the spending was prudent.

“This budget is like a dream budget,” said Rep. Randall Crowder, R-Clovis. “I still find myself stumbling a little bit at the 13.8 percent recurring funding that’s being proposed.”

Crowder said the proposed budget seems to fill “every need of everybody.”

“But I am struggling to believe that it is sustainable,” he said. “If oil and gas goes sideways or we have volatility, or if the federal government doesn’t continue the flow of COVID dollars to our state, we’re going to be in deep trouble.”

Rep. Dayan Hochman-Vigil, D-Albuquerque, said the budget includes economic development investments that will help the state, which relies heavily on oil and gas to fund its operations, diversify its revenue sources.

“We’re in good hands, and we continue to make key investments in diversification of revenue,” she added. “I feel very safe, and I feel good about voting for this budget.”

Rep. Gail Armstrong, R-Magdalena, said she agreed with most of her colleagues on “the good, the bad and the ugly.”

“There’s so many good things at a time that we have a lot of money,” she said. “I, too, have been, first year in the Legislature [in 2017], where we were sweeping from every nook and cranny that we possibly could and had no capital outlay money. And now, all the way to this.”