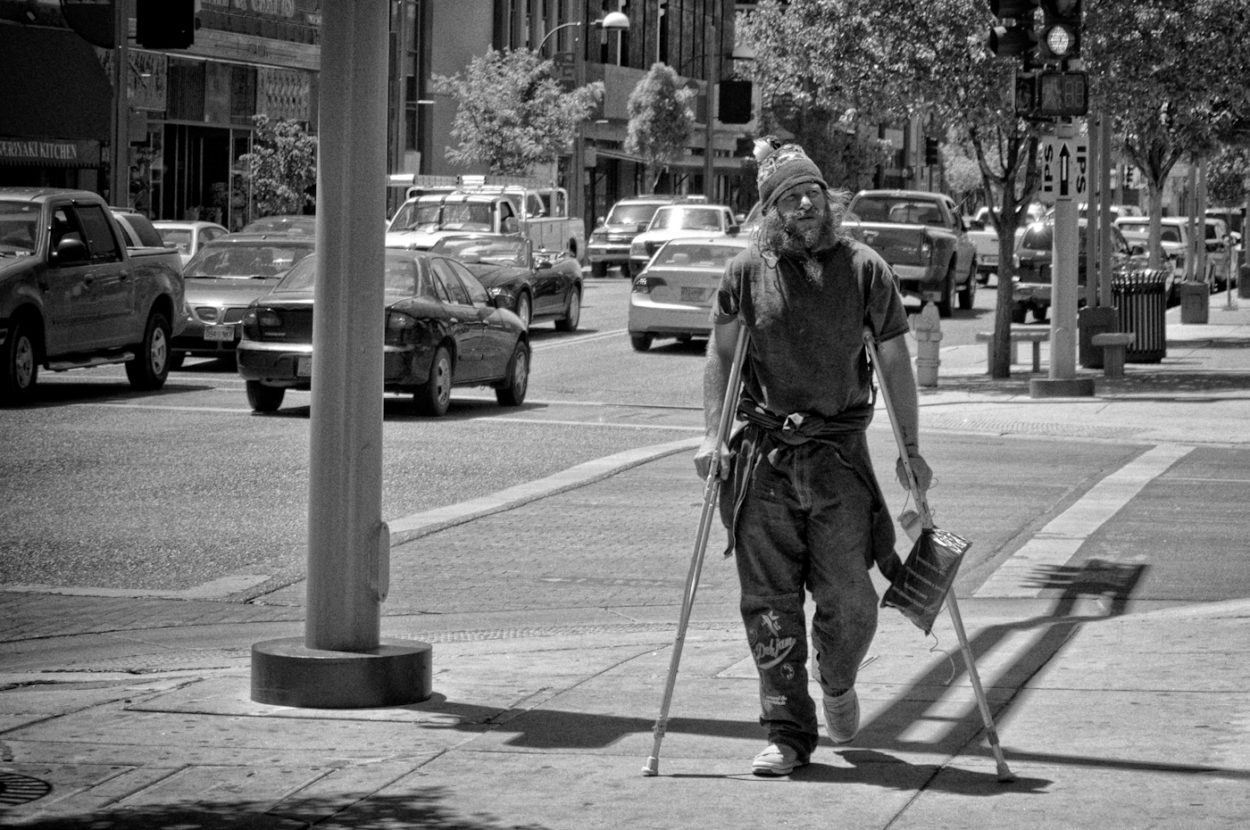 Geovanis Garcia was a well-paid worker in the oil fields outside of Carlsbad. The work wasn’t easy—the hours were long, 15 days on, 15 off. He’d wear a monitor around his neck to alert him of toxic gas emissions from the rigs (“If it starts beeping, you have to run,” he says). But three months back, oil prices started barreling downward. Garcia, who’s an immigrant from Cuba, lost his job.

He’s now living on the streets of downtown Albuquerque in the so-called Tent City that’s been slated for dismantling by city officials following reports of criminal activity in the area. The planned demolition also coincides with a biennial “point in time count,” a formal census of the city’s homeless residents.

Folks in Tent City look out for each other, says Garcia. There’s a tight-knit group of guys who immigrated to the United States from Mexico and Cuba—they share a common language, a cell phone and food. While there’s no doubt that some people living in the area make money selling illegal goods and services, Garcia says the hardest living conditions are the obvious ones: Cold temperatures and poor sanitation. He also points to a man across the street who’s on the verge of passing out on the sidewalk.

His friend Denis, another Cuban immigrant whose status has lapsed from legal to illegal, says Albuquerque police confront Tent City residents on a regular basis, demanding to see identification, pressing them to leave. All his legal paperwork was taken and never returned when he did a stint in the prison system, says Denis, and he’s terrified of being deported.

Adds Garcia, “the cops all the time tell us, ‘You’re not homeless, get out of here.’” He adds that all the clothes he’s wearing were donated to him.

“I say, ‘How you so sure?’ The cops mess with us every day. I do the right thing, though. I don’t give problems or get in trouble.”

The state Division of Vocational Rehab, which provides employment assistance to people with disabilities, has helped him a lot, says Garcia.

“They gave me some tools, so hopefully I’ll start finding me a job.” His plan is to save $3,000 for a commercial driver’s license and start working again so he can get back to sending money to his wife and daughter in Cuba.

A couple blocks away from the stretch of sidewalk where Garcia and the others have their tents set up in a colorful line, William Cramdell rests in a patch of warm sunlight cast against the wall of the Albuquerque Rescue Mission. A tall, bearded man with a soft, gravelly voice, Cramdell is a street life veteran and survivor of its attendant horrors.

He started acting out at a young age. At five, he burned down a neighbor’s house while playing with matches. As a teenager, he committed armed robberies.  Cramdell later started using meth, and that contributed to situations like the one in 2010 when he and his girlfriend, who was dying of Parkinson’s disease, were attacked outside by another homeless man.

“This guy had me by the throat and beat me up. I pulled out my old brass pocket knife,” says Cramdell, his voice quickening. “I didn’t mean to kill him. I felt his heart pop in his chest. And I was sorry for that. I knew the guy, used to work with him, but he was a drunk—got drunk at night and got beat up.”

Cramdell served three years in prison for the stabbing. He’s been homeless again since December, when he was released from yet another sentence for a meth trafficking conviction.

Compared to places like New York or California where he’s from, Cramdell says Albuquerque is a much kinder place to wind up homeless.

“They have some good programs here. I haven’t been in them, but I tell you, if you need someone to talk to, you can go to the churches or the train park on Saturdays … and they’ll get you in a program.”

He nods down the street toward Tent City.

Some of the people living there aren’t allowed in the Westside shelter or they’ve gotten kicked out of some of the transitional programs, says Cramdell.

“Some of them really don’t want to go back. They’re too drawn up in their addictions, and [the city] will have to drag them out scratching and screaming. Some of them grew up in this life.”

Cramdell says he’s trying desperately to fight off his own demons. “I got out [of prison], got a big bag of dope, and a week later, I was screwing up again,” he says. “My parole officer gave me a chance, and I’m trying not to mess it up.”

Despite the ugly face of the streets, “there are a lot of really nice people down here,” he says. “They just don’t have direction—they’ve somehow lost their way. You’re going to find that everywhere, but there’s always a way to make things better.”

Pastor John Hill is the executive director of the Albuquerque Rescue Mission. The nonprofit’s operations depend entirely upon private donations, which provide an annual average of 400,000 hot meals, up to 8,000 food boxes for hungry families, and a small number of beds for single men and people dealing with medical conditions.

The organization has a contract with the city to administer a large shelter on the West Side during cold-weather months. Pastoral staff and case workers also conduct outreach to enroll motivated people in a four-phase program to help transition them into sober living, employment and housing.

Hill says he’s personally approached the folks living in tents near the railroad tracks, “and asked them to come in out of the cold, but there is a propensity or desire not to do that.”

The accounts he’s read about vermin and mistreatment at the West Side shelter are “a mischaracterization,” says Hill. “I do have to have to qualify that, because I don’t stay there, and people are human, but I do think it’s overstated. People are reaching for an excuse to do what they do. I’ve had people tell me personally that they wouldn’t be able to make a living if they were staying in the shelter—selling drugs, pimping prostitutes.” The shelter’s rules are simply too confining for others, says Hill.

When it comes to paving better path forward, says Hill, local services for treating the dark twins of addiction and mental illness are in dire straits.

“We as a state do not have the capacity in any form to deal with the mentally ill in this area,” says Hill. “It’s simply not here. It still appalls me that in a metropolitan area this size, we don’t have a year-round shelter to look after our people, that we don’t have a real mental health component in this city. Those are issues I can’t wrap my brain around.”

Hill adds that the Rescue Mission couldn’t sustain its $6 million annual budget and program outreach without donations from of ordinary citizens, businesses and churches.

Despite that generosity, Hill says, “I think that we as a community need to be educated. We still take so much for granted, and there’s a disconnect. We know that there’s a need, but rather than actually sitting down and getting involved, they’ll write a check. That’s a disconnect.”

Hill says that chasm between the haves and have-nots perpetuates fear and stigmatization. “We were created to connect and be connected, and if we’re not connected, we’ll find something else. Because the homeless are not connected to what we call normal life, they create their own culture.”

He says he’d love to be a part of a local effort aimed at solving these problems in specific, targeted ways, using direct input from homeless people themselves. After all, says Hill, although it’s scary to consider, none of us are immune to hardship. Sometimes all it takes is a protracted sickness. A rough divorce. An accident or injury with recovery that drags too long.

“Whether we want to think about it or not,” he says, “all of us are so close to being in one of those tents.”