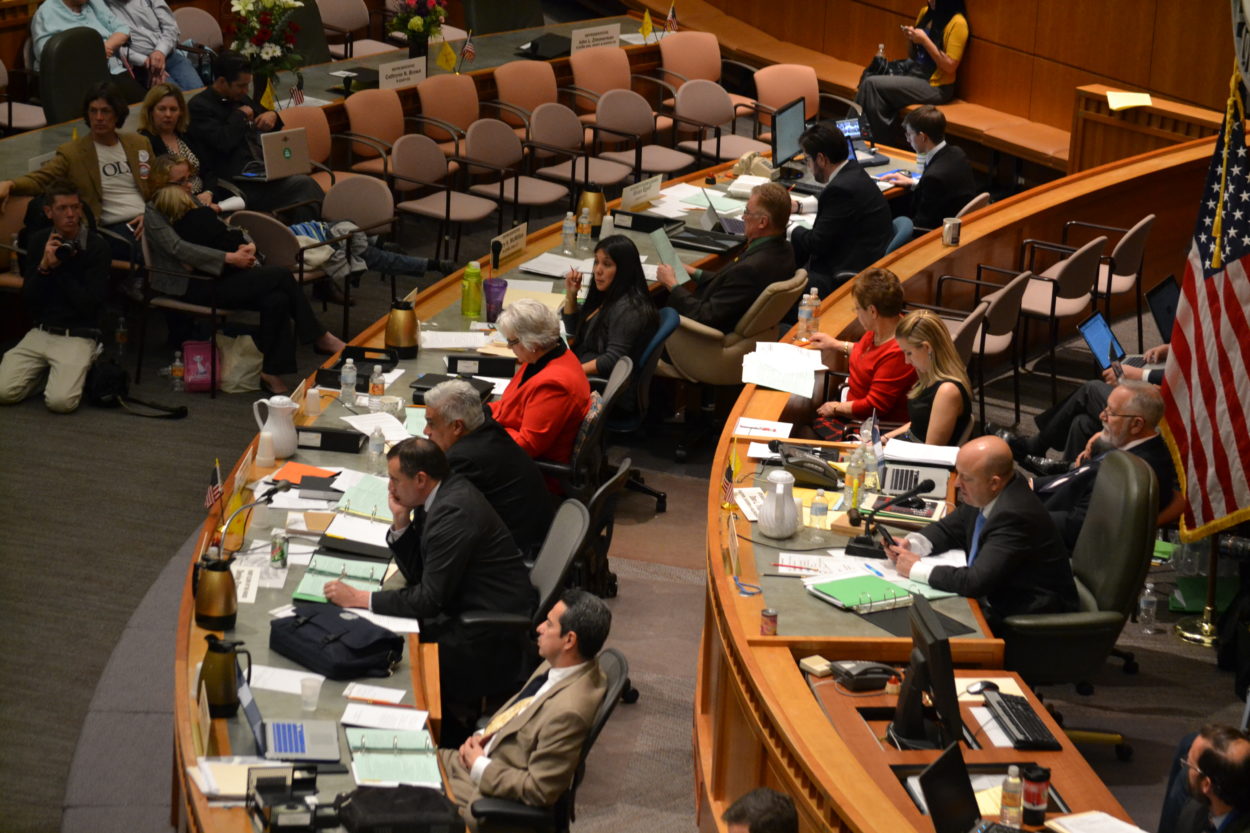 After almost six hours of questions, public comment and some heated debate, a House committee voted on Friday night to send right-to-work legislation to the House floor.

The committee voted on party lines, with seven Republicans voting to pass the legislation and six Democrats voting against.

The House Judiciary committee voted to pass the bill on a party line vote. The final version of HB 75 included an increase to the minimum wage, as part of a substitute bill introduced by Majority Leader Nate Gentry, R-Albuquerque.

Gentry’s substitute kept the original bill, but added language that would raise the state’s minimum wage from $7.50 an hour to $8.00 an hour. The proposal would also allow employers to pay a training wage of $7.50 for to new employees for up to six months.

Gentry’s substitute was introduced after one committee member questioned the sponsor for more than two hours.

The questions came from Rep. Ken Martinez, D-Grants, and were directed towards the bill’s sponsor, Rep. Dennis Roch, R-Logan, and his expert witness, former New Mexico Attorney General Hal Stratton. Martinez’s questions centered on whether much of the bill is constitutional or not.

Martinez expressed concern that current contracts could end abruptly, leaving workers in a vulnerable position. Roch told New Mexico Political Report he wholeheartedly listened to Martinez’s concerns and that he will take a deeper look at some issues.

“That’s not my intent to cancel contracts. That would truly be unconstitutional,” Roch said.

Rep. Paul Pacheco, R-Albuquerque, briefly spoke about his 27-year history as a law enforcement officer and his time as the president of a police union. He told Roch that he was concerned that the bill would not sufficiently protect police officers and firefighters, but that he would support the bill.

The only member of the public that stood in support of the bill substitute was Carol Wight, chief executive officer of the New Mexico Restaurant Association. She told the committee that her group normally would not support an increased minimum wage, but the proposed increase was reasonable.

Many of those opposed to the substitute were the same that spoke out against HB 75 on its own. Committee Chair Zach Cook, R-Ruidoso allowed public comment on the condition that the public only speak about the changes to the bill.

Those opposed to the substitute spoke for about an hour and a half and most spoke out against the proposed wage increase. Many told the committee that they saw the substitute as merely a ploy to pass the right-to-work bill.

One woman went as far to call it “draconian and offensive.” Many people addressed the training period mentioned in the bill and cautioned that employers could terminate employees before the training period is over to avoid paying the full minimum wage.

Many were members or leaders of labor unions. One of the more notable union representatives that spoke was New Mexico Federation of Labor President Jon Hendry, who said the issue wasn’t cut and dry.

“Mr. Gessing says it’s black and white,” Hendry said, referencing Roch’s expert witness in previous hearings. “I’ve got a Harvard professor over here that will show you the 50 shades of grey.”

Hendry was referring to Dr. Tamra Kay, who was also featured in a video(https://nmpoliticalreport.com/?p=1695)by New Mexico Political Report, and was in attendance in the audience.House Minority Leader Brian Egolf and Gentry had a verbal scuffle about their respective voting histories on related issues.

In response to criticism from Democratic members of the committee, he said his only motivation was to try and offer a compromise.

Gentry cited the 2013 Legislative Session when House Democrats passed a bill to raise the minimum wage to$8.50 per hour. The bill made it to the Governor Susana Martinez’s desk only to be vetoed.

“She’s acknowledged that she’s willing to sign this bill,” Gentry said. Some Democrats expressed concern that the minimum wage addition was a strategy by the Republicans to bolster political campaigns in the future. Rep. Antonio “Moe” Maestas, D-Albuquerque, said he believed that there would be future campaign commercials citing that vote and say Democrats voted against an increase to the minimum wage.

Egolf told New Mexico Political Report his party’s intention was to stop what they see as unnecessary legislation.

“The Democrats didn’t vote against the minimum wage,” Egolf said after the vote. “We were voting against right-to-work in spite of the fact that they tried to buy us off with a measly change in the minimum wage.”

When the committee met, earlier this week, Roch presented a substitute that included a provision that would allow employers to hire union members exclusively if they so chose. That form of the bill never made it back to the committee after the debate on Tuesday.

The bill will now head to the House floor for debate.