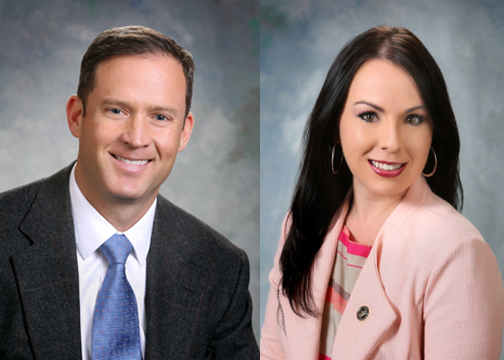 A lawmaker is demanding an apology from the House Majority Leader for allegedly passing around a picture with offensive writing.

Rep. Stephanie Maez, D-Albuquerque, said she was told by another member of her caucus that Majority Floor Leader Nate Gentry had a printed picture of her with “xoxo” and “thanks for your vote Paul” written on it and was sharing it in the House Judiciary Committee.

Maez told New Mexico Political Report that a member of the committee, who did not want to be named, told her of the picture that Gentry was passing around during a hearing. She said she was mainly upset because she doesn’t think the same thing would have happened to a male member of the legislature.

“Representative Nate Gentry has shown blatant disrespect to me, to this institution, and to all women. His conduct is inappropriate, offensive, and should not be permitted in the New Mexico Legislature,” Maez said in a written statement.

Maez was presenting a bill on Monday afternoon that would limit the amount of time arrestees can be held in custody before a trial. The committee, which Gentry is a member of, made some critiques of her bill and a few members encouraged her to make some changes and bring the bill back.

After a motion to table the bill, which would have made it more difficult to bring back up even for changes, the panel voted not to table the bill. All but two Republican members voted in favor of the tabling motion. One of those Republicans was Rep. Paul Pacheco, R-Albuquerque.

Maez said she thinks the picture was intended to “bully” Pacheco for his vote. She did not see the picture herself, but said she was told it was made to look like “a valentine”.

New Mexico Political Report was unable to reach Gentry or the Majority Leadership office for comment, but a staff member told the Santa Fe New Mexican the allegation is an attempt to deflect from a comment previously made by Rep. Ken Martinez, D-Grants.

Maez said she had not spoken to Gentry or anyone from the leadership office about the incident.