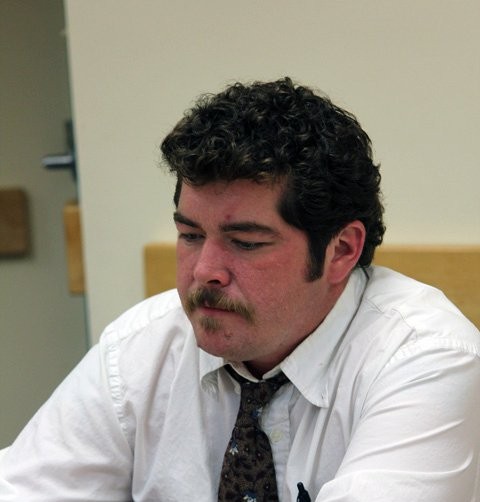 Adrien Lawyer is the executive director and co-founder of the Transgender Resource Center of New Mexico (TGRCNM), which describes itself as a “clearinghouse for resources.”

Lawyer and his professional partner started TGRCNM in 2008, but the center didn’t move into a physical building until 2012.

Lawyer and the center advocate for transgender people through education and services that range from health screenings to navigating through name changes. TGRCNM pushed to change policies at the Motor Vehicle Division on gender designations on identification cards and driver’s licenses.

As part of the education outreach, Lawyer travels around New Mexico to educate the public with his Trans 101 presentation, which he estimates he has shown at least 500 times.

Ahead of the Albuquerque Pride Parade taking place on Saturday, New Mexico Political Report spoke with Lawyer about a variety of topics, including attending his first Pride event 20 years ago as a “butch lesbian,” how the event has changed over the years and, yes, Caitlyn Jenner.

New Mexico Political Report caught up with Lawyer as he was making his way back to Albuquerque from a presentation in Las Cruces.

The following Q&A has been lightly edited for tone and clarity.

New Mexico Political Report: What types of services are offered at the Transgender Resource Center of New Mexico?

Adrien Lawyer: We’ve been around since 2008 that’s when we kind of came together with this name. At the drop in [center] we have eight different support groups all throughout the month. We have food, clothing, mental health counseling, harm reduction services, a safe place to be, a safe restroom to use and HIV testing. We’ve helped a lot of people through identity document changes and legal name changes, we have legal assistance, we do a lot of different programming and we’re adding more all the time.

If we don’t have it because we’re not offering it, we’ve cultivated somewhere else. We don’t have a transitional living program for people right now but we went in and helped with education to open up the Barrett House to transgender women instead of just cisgender women.

What is the current role of the transgender community during Pride week now compared to in the past?

AL: I think the existence of an organization like ours makes a huge difference, because it’s not just individual people who can be written off as difficult or challenging or having mental health issues that are trying to advocate for trans inclusion. We have an organizational presence. We almost have to be taken a little bit more seriously. I think having an agency like ours helps a lot.

For me, I was a butch lesbian from the age of 15 into my 30s. I have actually lived in Albuquerque for 20 years and I attended Pride as a gay person and I don’t ever remember seeing trans people or there being any kind of a trans presence that I noticed. We had a long standing support group in Albuquerque that was there way before we ever showed up. We may have had a table at Pride, but it didn’t register with me and I don’t remember seeing trans people. That may just be my filter, but I think if you went to Pride this year, you’ll see a lot more of us in the parade for sure.

I think, like almost everything to do with trans people, being trans is something that sort of loosely binds all these different kinds of people. So, I think folks who are already more affluent or employed or housed, you might see a lot more of those people who fall under those categories.

Still, the young trans women of color who are kind of pushed in the streets, they may or may not be attending the Pride event. Those are the people that get left out of everything in our society, so it’s not surprising to me if they’re not fully integrated into Pride yet either. I think you see more trans folks, it’s just that you see a certain sample of them.

Caitlyn Jenner has recently received a lot of media attention in the past two weeks, and previously Laverne Cox (Orange is the New Black) was in the spotlight. Does this help or distract from the issues the transgender community face?

AL: I think you’re going to hear a lot of trans folks be of two minds about this. To me, Caitlyn is our sister and I want her to be actualized and to be able to live her life in a way that is not profoundly affected by violence and discrimination.

I feel that I have not seen, personally, the backlash on social media and in the broader media towards trans people from any other celebrity presence that I’ve seen from Caitlyn. I also find Caitlyn to be an incredibly non-representative sample, which is also really problematic. This is an affluent white transgender woman who can pay for all of these things out of pocket and is on a reality television show. It’s hard because it does feel like it is obscuring some of the more pressing issues faced by a lot of other transgender people.

For me Laverne’s presence, especially with her analysis and her kind of unwavering commitment to lifting up those voices and those issues, is a positive thing for our movement and our group. She is a person of color, she has experience some of these things firsthand and has more of a working knowledge of what’s going on.

I know trans people are every different kind of people.

Right now I do all of these Trans 101s all over the state and so I know that in people’s minds, I become the trans person no matter what I say and tell them, ‘Don’t think of it that way.’ I’m the one trans person they’ve met and know now. When someone says trans, I pop into their mind. It concerns me that Caitlyn’s become that to a lot of people in middle America, that she would become the idea of a trans person. Her experience is sort of rarified.

What roles do local politics play in the transgender community?

AL: I think it’s huge. We’re still one of only sixteen states that have non-discrimination laws for trans people. It certainly doesn’t keep people from getting fired or not hired, but at least it’s there. Our county commissioners have helped to direct funding towards us so that we can have an AmeriCorp staff person with us, which means a trans person got hired because of that. I think that’s where you see a lot of impact, almost, to me, more than the national level.

How can news outlets improve when it comes to conversations or coverage on transgender issues?

AL: This is so interesting, because I was just interviewed with a friend of mine, a board member of ours, for kind of a companion piece to Caitlyn’s story on the night that it aired with Diane Sawyer. The reporter interviewed me and one of my board members and never asked that question you just asked me and proceeded to basically violate every sort of best practice that we have recommended.

There’s ‘one pagers’ that exist on the media guidelines and this person wanted to interview trans people and put it on TV and didn’t even look at what they were. They had me in a chair, and didn’t ask me. They didn’t just say, ‘Are there special things we should do to not make a mess out of this?’

It just showed me how much, a lot of times, the media exists for its own self. Media are often not advocates. They just want people to read the story or click on the website. To me the first and foremost thing would be to take 90 seconds to familiarize yourself with the recommended best practices, because that really keeps a lot of people from feeling really, deeply, undermined when they are the subject of the report.

The other big thing would be to make sure we’re really elevating the voices of the most affected. Not just do these stories on Caitlyn, but get other’s people’s voices in there too.

We appreciate your time.

AL: Thank you so much.