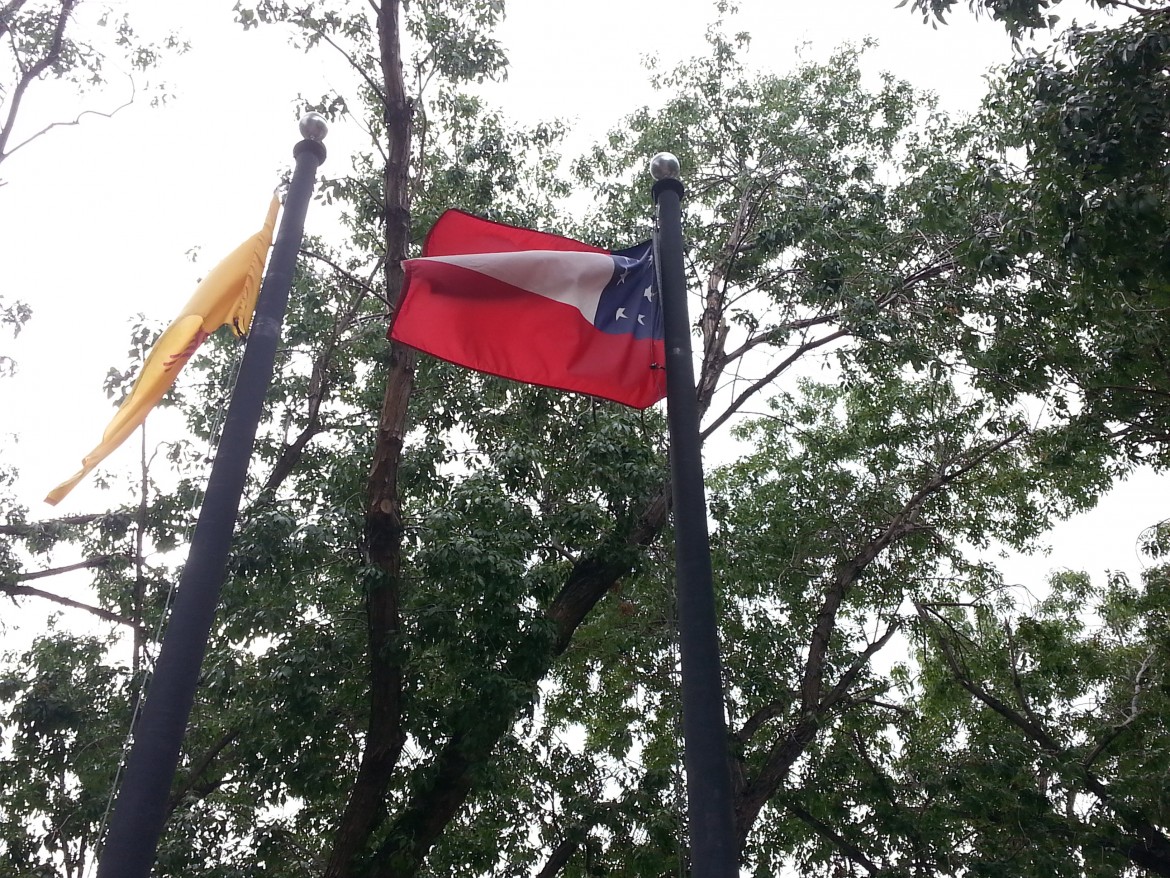 In the early months of the Civil War, Confederates took armed control of New Mexico Territory for just six weeks.

But a stroll through the heart of Albuquerque’s Old Town 150 years later suggests a more permanent stay for the Confederate States of America. Though Southern imagery here may seem subtle—no famed Confederate Battle Flag flies over Old Town plaza, for example—multiple monuments commemorating aspects of the Confederacy’s brief hold of Albuquerque are on public display.

A “Stars and Bars” banner, the Confederacy’s first official flag, flies over the west side of the Plaza next to Spanish, Mexican, New Mexican and United States flags.

Two plaques, one dedicated to the Skirmish of Albuquerque—when Confederate troops held off Union troops for a day and a half before fleeing themselves—and one dedicated to buried Confederate veterans, decorate the east side of Old Town’s Viejo Gazebo. Two replicas of union Mountain Howitzer cannons captured by the Confederacy and used against Union troops in the skirmish sit on the Plaza’s east side.

Some say the imagery represents nothing more than New Mexico’s Civil War history. But Moises Gonzales calls foul on that argument. To him, the monuments perpetuate a “falsified history” of New Mexico as a Confederate state. He says they also distract from longer lasting, more influential epochs like the nearly two century struggle between Villa of Albuquerque town militia and Comanche, Apache and Navajo raids.

“Compared to the other history on the Plaza, only one narrative is put out there, and a rather horrible one, like it was the only historical event that mattered,” Gonzales, an assistant professor at the University of New Mexico’s School of Architecture and Planning, told New Mexico Political Report.

A brief Confederate history in Albuquerque

The short Confederate occupation of Albuquerque began when southern Gen. Henry Hopkins Sibley marched an army of more than 1,000 Texans north from Mesilla in February 1862. En route, Sibley’s army won a battle against Union troops near what is now Elephant Butte State Park.

In hearing of the coming Confederate advance, a Union captain in Albuquerque burned government property and ordered all troops to flee to Santa Fe. Sibley took Albuquerque on March 2. On April 9, these Confederate troops fought Union soldiers in what’s now known as the Skirmish of Albuquerque.

The Old Town plaque commemorating the skirmish reads, “Though outnumbered six to one, a small detachment of Confederates under Captain William P Hardeman repulsed the attack and maintained possession of the town.”

It doesn’t, however, mention that the general in charge of union troops, Col. Edward Canby, started the skirmish as more of a test of Albuquerque’s Confederate strength than an actual attempt to take back the city.

“The firing ceased when Canby was informed that noncombatants in the town were endangered and were not permitted by the Texans to leave,” wrote Rio Rancho historian Don Alberts in his 1998 book The Battle of Glorieta. “His objective had been met, however; the Rebels would indeed resist.”

Three days later, in the face of overwhelming odds, the Confederate Texans fled from Albuquerque. While doing so, they left behind “their hospital and its patients” as well as the howitzers, according to Alberts’ book.

Alberts also mentioned Union Maj. Thomas Duncan as the only casualty from the skirmish. Still, one of the Old Town gazebo plaques reads, “Confederate Soldiers who served in Gen Sibley’s Brig with Maj Trevanion T Teel were buried here when Conf Flag was flying over Old Albuquerque in April 1862.”

That statement is not accurate, according to Albuquerque Museum Curator of History Deb Slaney.

“There is no evidence that Confederate dead were buried in the plaza,” Slaney wrote in a July 10 memo provided to media by the city Cultural Services Department.

And while Slaney writes that the Skirmish plaque is “accurate and tells an objective story,” she adds that the writing is “fragmented, with no beginning and end.”

As for the Old Town Confederate flag, it’s “posted within the context of the other four flags,” which Slaney argues “symbolize the history of a sequence of governments that is unique to our region of the country.”

But to Rodney Bowe, the Confederate imagery in Old Town symbolizes white supremacy and oppression of African-Americans. Bowe, himself an African-American who works with Sankofa Men’s Leadership Exchange, said he can’t understand why we would “fly an enemy’s flag.”

“If they would have won the war, you and I wouldn’t be having this conversation,” he told New Mexico Political Report in a recent interview.

Sponsors of the plaque

Some of the organizations behind the Confederate imagery are also problematic to Bowe. The Skirmish plaque, for example, was placed in 1982 by the local chapter of the Sons of Confederate Veterans.

“The citizen-soldiers who fought for the Confederacy personified the best qualities of America,” reads the Sons of Confederate Veterans official website. “The preservation of liberty and freedom was the motivating factor in the South’s decision to fight the Second American Revolution.”

The Sons of Confederate Veterans is not listed as a hate group by the Southern Poverty Law Center, which tracks racist and extremist groups. But Mark Potok, a senior researcher of the Center and editor of its quarterly Intelligence Report magazine, said some members of the organization are southern extremists.

“We hear them again and again say the Civil War had nothing to do with slavery,” Potok said in a short interview.

Within the past 15 years, Potok said the organization experienced “a real battle between racist extremists and people who wanted it to be a history club.” The internal battle resulted in a stalemate, according to Potok, and today some state chapters are more radical than others.

Locally, Jim Houghton serves as division commander of the New Mexico Sons of Confederate Veterans. Houghton told New Mexico Political Report that his family fought on both sides of the Civil War.

Houghton said some of the current backlash over the Old Town monuments is coming from people that previously didn’t know the Confederate imagery existed.

“I’m just amazed this thing is still hanging around,” Houghton said. “I think we’ve got more important things in this world.”

Albuquerque Mayor Richard Berry is planning to meet with a group of community leaders who oppose the Confederate Old Town imagery about the issue this Friday. City Cultural Services Department Deputy Director Dave Matthews writes in an email that Berry is planning to make a decision on whether to remove the imagery sometime early next week.