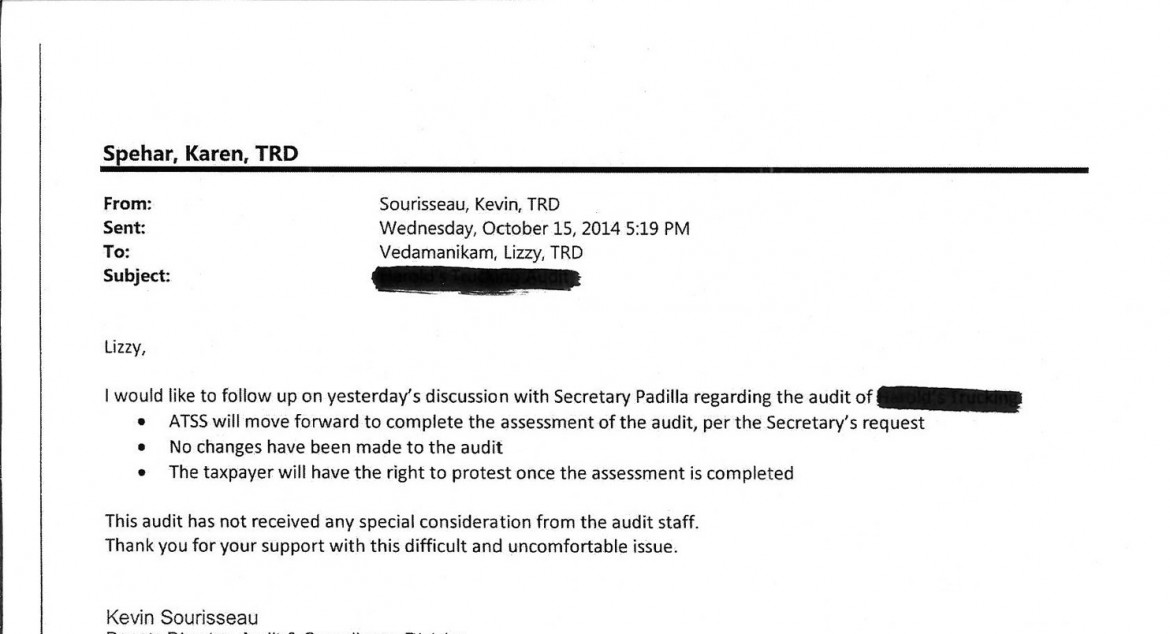 Before New Mexico Political Report recently reported on a botched redaction from the state Taxation and Revenue Department, we reached out to its spokesman multiple times.

It took Taxation Department spokesman Ben Cloutier more than four hours to respond. And when he did, he responded with a legal threat.

However, the legible release of the taxpayer’s name in question came from Cloutier himself.

The issue in question concerns an email Cloutier released to media outlets last week related to an ongoing investigation of the Taxation Department Secretary Demesia Padilla.

Padilla is accused of providing preferential treatment to a former client whom she once handled accounting work. Earlier this spring, State Auditor Tim Keller contracted with a forensic auditing firm, Albuquerque-based McHard Accounting Consulting, which conducted a preliminary investigation into the matter.

The allegations against Padilla have since been referred to Attorney General Hector Balderas.

The seriousness of disclosing information of the taxpayer Padilla allegedly protected is peppered throughout public documents concerning the case released by Keller’s office earlier this month.

“Violations of our confidentiality laws place these employees in jeopardy of both employment and criminal sanctions,” Odell writes.

But last week Cloutier sent an email to multiple media outlets between two Taxation Department employees that hint the taxpayer didn’t receive preferential treatment. Although the name of the taxpayer was twice redacted, the redactions were transparent enough to see through on a computer screen. A simple brightening of the email makes the redacted words even more legible.

Cloutier denounced New Mexico Political Report in a statement to both the Santa Fe New Mexican and the Albuquerque Journal while refusing to acknowledge his office’s role in releasing the name:

The fact that a leftwing blogger manipulated the public record to out the small businessman underscores how this has become a pathetic example of manufactured political theater led by the most partisan state auditor in New Mexico history.

Yet Gregory Williams, the president of New Mexico Foundation for Open Government, said government agencies have a responsibility to redact documents properly.

“I don’t think you have a responsibility to return it or something like that,” Williams told New Mexico Political Report in an interview. “I think the responsibility lies with the party that’s producing it.”

“I’m not sure I’ve ever seen it happen where they just didn’t do a very good job with their magic marker,” he said.

In a statement released this week, Keller’s office said it had “been careful not to release information regarding the identity of the taxpayer.”

“It would be deeply troubling if the Taxation and Revenue Department released confidential information about any taxpayer,” State Auditor spokeswoman Justine Freeman said.