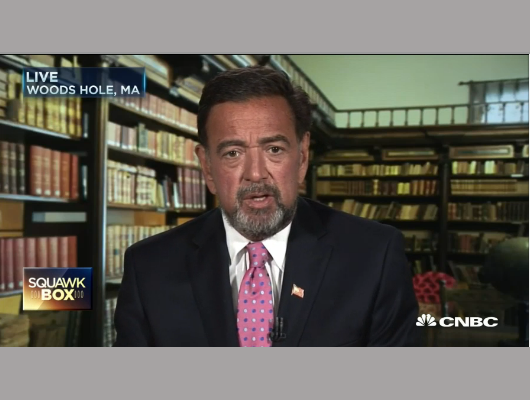 Richardson, who is also a former federal Energy Secretary, says he supports easing the ban on oil exports.

“The price may go up a little bit, but at the same time, prices for gasoline, home heating oil, they’ve gone down a bit,” he said according CNBC, though it was not part of the video included. “If we continue with these oil export waivers, it’s going to be good for the country.”

The appearance came after the Obama administration opted to swap some crude oil with Mexico. That brought more calls for the ban to be lifted.

The swap would provide U.S. light crude to Mexico in exchange for heavy crude. The oil export ban has been in place since 1975. It does not apply to oil that has been refined into gasoline or diesel fuel.

Richardson called the swap a “clever move” and noted that it happened on a Friday at 5:00 p.m., a time when moves do not get much media attention.

He also called it “a signal.”

“It’s a signal because Mexico is having foreign investment in their oil sector for the first time and that’s good,” Richardson said.

One thing that Richardson kept coming back to was that lifting the oil export ban would help the United States geopolitically as other countries do. He said that Russia uses natural gas “as a political weapon” against Europe, especially Eastern Europe.

“This Iran oil, it’s going to be out there probably late in the year,” Richardson said. And what you’re going to have is oil prices, if they start going under $40, that’s going to hurt the U.S. economy.”

Richardson isn’t the only New Mexico politician to call for the lift of the oil export ban. Earlier this year, Steve Pearce, R-N.M., wrote an opinion piece for the Albuquerque Journal in which he said doing so would benefit the United States economy as well as New Mexico.

“New Mexico producers cannot afford to continue to invest in new drilling projects,” Pearce wrote. “Rigs are being laid down and the spin-off gains for New Mexico are weakening.”

The Mexico swap isn’t the only exemption to the oil export ban. Some oil, such as crude oil from the Cook Inlet in Alaska, is able to be exported to other countries.