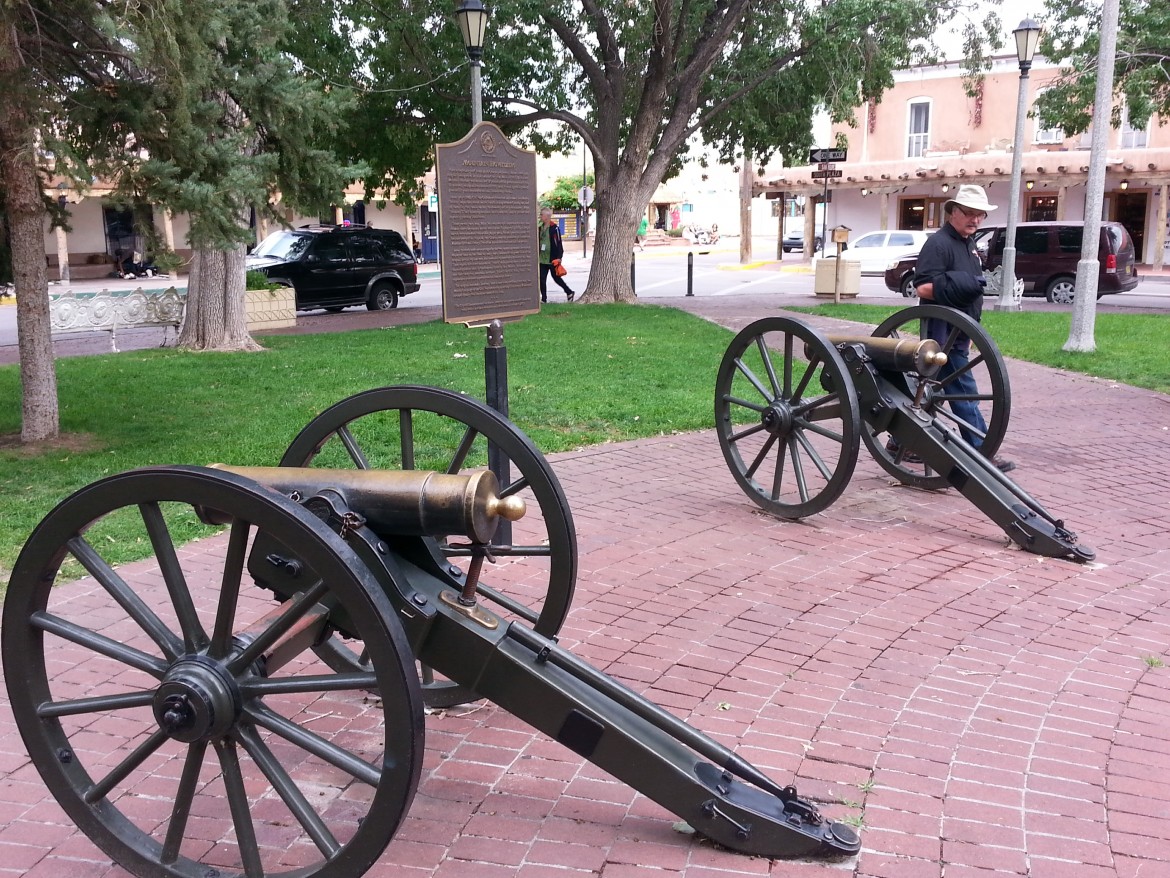 It’s been two weeks since Albuquerque Mayor Richard Berry removed Confederate imagery from Old Town after a group of advocates brought attention to the issue.

In doing so, Berry ordered that images that “accurately represent our place in the history of the Civil War” would stay up. Plaques indicating Confederate bias would come down, Berry said.

But to Elder Michael Jefferson of Procession Ministry, it’s not enough.

Today, Old Town still displays replicas of two Mountain Howitzer cannons that Confederates used against Union soldiers in the Skirmish of Albuquerque, as well as a plaque describing the cannons. Part of the plaque reads: “It is sometimes said that these two mountain howitzers ‘guard’ the Old Town Plaza. They represent a proud and important era in Albuquerque history.”

Jefferson, who organized the opposition to the Old Town monuments, maintains that these images aren’t accurate or neutral.

He describes the cannons as “weaponry used against the USA” and argues that public display of any Confederate imagery is “offering the continuation” of the Confederacy’s ideology of white supremacy.

“Either all men are created equal or the white man is superior to the negro,” he said. “We already had that fight. One ideology lost.”

New Mexico Political Report caught up with Jefferson to hear his thoughts on the issue.

What is wrong with keeping the Howitzer cannon replicas in Old Town?

Elder Michael Jefferson: The cannons belonged to the Confederate army. When the Confederate army was chased out, they buried the cannons. Which means prior to then they were using those cannons to kill American soldiers. Using them for assault. As a veteran, why would I want to celebrate that? You’re commemorating people who believed in an ideology that the white man was superior to all races and the negro was supposed to be in slavery. Those cannons were used by traitors—men who committed treason. Why are we glorifying that?

What about arguments that removing the imagery is whitewashing history?

What is now the southern part of New Mexico, that was part of the Arizona territory. Now, the Arizona territory had succeeded from the Union and was Confederate area. But this part of New Mexico was New Mexico territory and not part of the Confederate area. The Union army would have had to surrender the area. There is no evidence they ever [formally] surrendered the area. If you want to preserve history, let’s put it somewhere where the history can be accurately described. It is historically wrong and it’s an insult.

How is displaying Confederate imagery different than flying the American flag, which once allowed slavery?

I fought for that flag [Editor’s note: Jefferson served in the US Navy from 1978-84]. That flag at one time had slaves. They corrected that. The ideology of the American flag is that all men are created equal. Even though we have not been perfect in the execution of that, the opportunity is there. The Confederate ideology is not so. Alexander Stephens, the vice president of the Confederate States of America, said “our new government is founded upon exactly the other ideal, its cornerstone rests upon the great truth that the negro is not equal to the white man; that slavery subordination to the superior race is his natural and normal condition.”