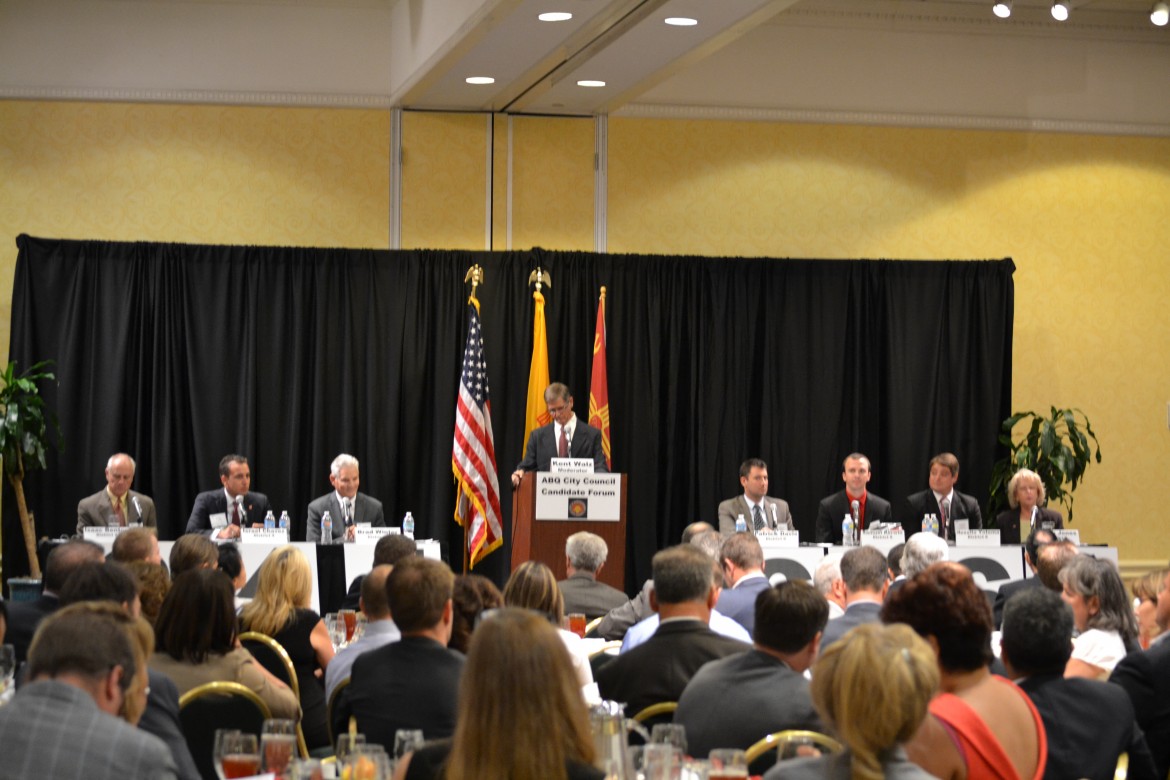 In a forum hosted by NAIOP, a real estate development group, the council hopefuls answered a series of questions, which they had seen in advance.

Out of the four districts up for election this year, two have candidates running uncontested. In district two, council veteran Brad Winter is running against newcomer Israel Chavez. The two candidates seemed to be on the same page on the issue of reforming the city’s development ordinance, but had different thoughts when it came to the proposed Fair Work Week Act, aimed at requiring certain benefits for workers.

Chavez said he is usually favors “piecemeal” legislation as opposed to blanket changes, but that he thought, “the council has an obligation to look at the pieces of legislation.”

Albuquerque Mayor Richard Berry and some city councilors have been outspokenly against the Fair Work Week proposal, saying it would put an undue burden on business owners.

Winter agreed to that sentiment and told the audience he was completely against the proposal and that government officials should not dictate how businesses are run. His statement received a fair amount of applause and at least one “thank you” from the audience of businesspeople.

Winter told the crowd he has experience in city government and pointed to his experience as an interim superintendent of Albuquerque Public Schools as proof that he is devoted to improving the city.

Chavez maintained that he will bring a fresh perspective to the council and is a member of the millennial generation, which he said is the future of Albuquerque.

In District 6, there are three candidates trying to fill the spot of Rey Garduno, who recently announced he would pursue another term.

Pat Davis, who Garduño officially endorsed, is running against Hess “Hessito” Yntema and Sam Kerwin for the District 6 spot.

All three district 6 candidates seemed to agree on some sort of city development reform. Kerwin said he is in favor of a more understandable development code.

Yntema, whose father is a former city councilor in the same district, said he also agrees on a more comprehensive way of development, calling for plan that is “clear, simple and concise.”

The big differences for the District 6 candidates came with the discussion of the Fair Work Week proposal.

Yntema said he was opposed to the idea.

“This is not simplifying the business code in any way,” he said.

Davis said he was in favor of the proposal saying, “It’s no secret that I support this.” He added that he saw some room for improvement, but that, “At the end of the day we need to have a productive conversation and dialogue on this.”

Kerwin seemed less tied to either side of the issue. He echoed the sentiment that the government should have a limited role in running businesses.

“This is a tough one,” Kerwin said.

He went on to say that if workers were treated more fairly, the city would not have to be involved.

“Government would not be intervening if this wasn’t a systemic problem,” Kerwin said.

Another issue the candidates addressed is the proposed change by Mayor Berry to the transit system along Central Avenue.

Most of the candidates addressed the issue diplomatically.

Chavez, without fully endorsing the plan, called it, “a step in the right direction.”

Winter said the businesses that would be affected need to be in on the decision-making process.

Davis also said he is concerned about businesses in the Nob Hill area and how or if they would survive with street construction.

He said he is a “big fan” of public transportation but that he’s “not sure it’s exactly right yet.”

Kerwin bluntly called the transit plan, “a bunch of fluff.” He argued that more buses in other parts of the city would better improve transit instead of a revamped route on Central.

The only two candidates running unopposed, Trudy Jones and Isaac Benton, also answered questions and boasted that they are working together on a proposal that would change the city’s development plan. Benton said he supports the Fair Work Week proposal, while Jones said she is very adamantly opposed to it.