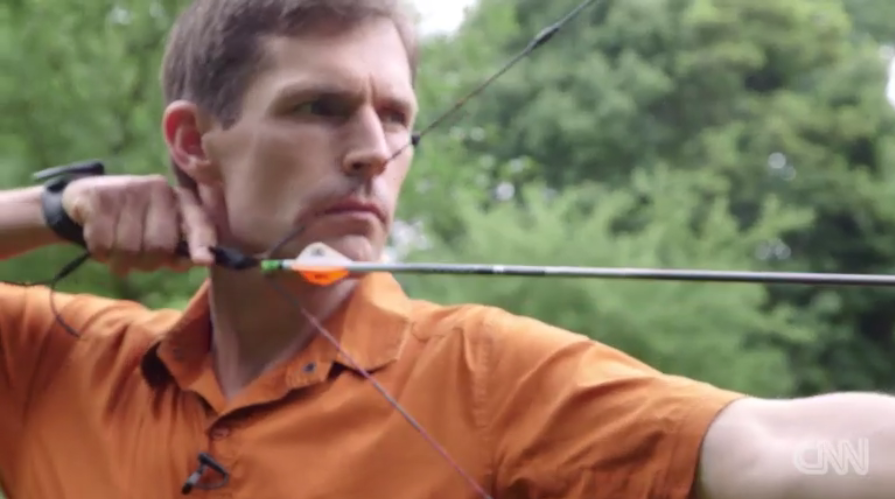 A screenshot from CNN report on Martin Heinrich.

A U.S. Senator was on CNN this week to talk about conservation and the 2016 presidential race in a unique setting: while preparing for an elk hunt.

A screenshot from CNN report on Martin Heinrich.

Cupp says in the video that while putting together the Outside with Insiders series, everyone on “The Hill” told her that she “had to find Martin Heinrich.”

Heinrich talks about the “North American model of wildlife conservation,” and calls it the “envy of the world.”

These basically say that fish and wildlife belong to the public, and so should managed in a sustainable way. Which, of course, allows for hunting. And Heinrich is an avid hunter.

Heinrich is not hunting for trophies, however, and the Congressional Sportsmen’s Caucus member has a well-documented history of hunting for food for his family.

“My boys have grown up not really knowing what beef from the grocery store tastes like,” Heinrich says.

Heinrich has repeatedly introduced legislation to open up federal land to hunters and anglers.

This isn’t the first time that Heinrich’s hunting has hit a national stage. In a 2014 opinion piece for the New York Times about public lands in the West and how he thinks the lands should stay public, Heinrich mentioned his hunting.

Like many New Mexicans, my 11-year-old son and I just returned from an autumn elk hunt on national forest land. The bull elk that we brought home will feed our family for most of the coming year, but the experience of backpacking into the high country, sleeping on the ground and hearing the elk bugle around us will feed my son’s imagination for years to come. If these lands end up in private hands, there is no guarantee that we will be able to go back year after year with the open access that Western sportsmen cherish.

It wouldn’t be a story about a politician in the summer of 2015 without talking about Trump.

When asked how Donald Trump plays in New Mexico, Heinrich laughs before answering.

“I appreciate what he’s doing, trying to entertain my constituents,” Heinrich answers.

As for the Democrats, he says that the Clintons are “not new to New Mexico.” Clinton actually edged Barack Obama in the 2008 New Mexico Democratic presidential primary.

“Hillary Clinton was very engaged in historic preservation in the state,” he says.

Still, he says there is no such thing as an automatic nomination.

The show, Rival Survival, followed the two trying to survive on a deserted, tropical island. Heinrich says it has “paid dividends” and has helped the two get to know each other and work together on issues.