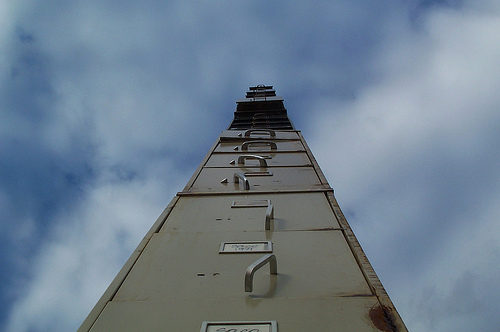 In March of 2015, the Albuquerque Journal published a handful of letters sent to New Mexico Education Secretary Hanna Skandera by high school students from around the state. The columnist who wrote the article wrote that she filed a records request and obtained the letters. The letters that were published had glaring mistakes.

Some of the excerpts highlighted in the UpFront column:

“I mean we can barely pass the SBA. We’re 50th in the state when it comes to education. … We’re not trying to cause Kaos.”

“I will not be able to focus or feel comfortable if I am taking a test that determines my future.”

“what if everyone fails”

New Mexico Political Report Senior Reporter Joey Peters was working for the Santa Fe Reporter at the time and did his own records request and found that there were in fact many well-written letters sent to Skandera and the Public Education Department. Peters noted that a number of letters showed critical thinking by students.

“Putting more time, money and energy into testing students is a waste of resources that could have been used improving the public education system of New Mexico, one that is in desperate need of innovative thinking and creative minds,” writes Ryan Miller, another Santa Fe High School student. “The data collected by tests is useful, and while I understand that and expect for it to continue, I believe that continuing support of intelligence and creativity will help young people of the world develop into people who can solve problems and create a more innovative, healthy future.”

Peters wasn’t the only one with questions about the letters. Timothy Zannes, a self described “concerned parent and PTA member”, filed a similar records request with PED. He told New Mexico Political Report that the letters didn’t sit right with him.

“Something about those letters and the FOI [Freedom of Information] Act request by the Journal smacked of a set up and I just wanted to examine the request for myself,” Zannes told New Mexico Political Report in an email.

In the end, Zannes was convinced that there was no evidence of a set up,. But it would take three months to discover that.

Under state law, a request for public records must be answered immediately, if the records cannot be produced within three days the respective public body has to answer with an estimated date of delivery. With some exceptions, that delivery cannot take longer than 15 days. Zannes received the standard three-day confirmation, but didn’t immediately get his records.

He initially requested the records in May and didn’t receive them until August—after he and New Mexico Political Report inquired about the status of the request.

New Mexico’s Inspection of Public Records Act provides for certain penalties when a public body violates the laws surrounding public records. Even when the records are late, if they are delivered there is no longer a violation, according to Mona Valicenti, an open government attorney with the New Mexico Attorney General’s office.

“Once they provide the records, you can’t go to court,” Valicenti said.

The AG’s office provides an IPRA compliance guide and serves as the enforcer for IPRA compliance. While they can pursue legal action when there is a violation, they rarely do. Valicenti said her office will look into violations, but they usually just issue a notice of non-compliance. She said violations range from obvious to very complex.

“Sometimes it’s very clear, it gets a little more complicated when they use one of the exceptions to withhold production of the records, Valicenti said.

Some of the exceptions include certain personnel issues or an “overly broad or burdensome” request.

Still, if the AG’s office determines there is a violation, it’s usually up to the requester to file a legal complaint against the violator. This often proves problematic for those who do not have the time or money for a possible lengthy court case.

Independent journalist Peter St. Cyr knows first hand what kind of resources are required when going up against a public body. He recently won in a court case against the Albuquerque Police Department regarding a request for weapons inventory.  St. Cyr said he was able to to go up against APD because he had the the support of ABQ Free Press, a publication for which he often writes.

“My concern is that government agencies can fight the release of documents using taxpayer money to pay for legal services, where private citizens don’t always have the money to be able to fight back for a long period of time,” St. Cyr said.

St. Cyr was recently awarded the Dixon First Amendment Award, for his work in open records reporting. He said he rarely goes to the AG for support since he is usually directed to file a suit himself.

“We would like to see the attorney general do some more enforcement,” Boe said. “Right now, we do need some teeth.”

“If you’re going to be a public official, you need to learn the law,” Boe said.

“The fact that they’re part time is just more reason to get some good training,” she said.

New Mexico Political Report reached out to a handful of public offices and asked about pending records requests. A spokeswoman for the state Auditor’s Office said they usually have two to three open cases open at one time, but that it’s the scope of the request that determines the resources needed.

Albuquerque Public Schools, which is currently in the midst of scandals,  told New Mexico Political Report that they currently have 33 open records requests.

The records custodian for PED said after Zannes request was completed there were no outstanding requests. No one in the office would say why his request took so long.

Other offices did not respond to the question of how many open IPRA requests are pending.

The delayed response from PED comes just weeks after a district judge in Santa Fe ordered the state to pay $500 plus attorney’s fees to National Education Association New Mexico (NEA) after PED violated IPRA. In the NEA case, PED did not respond for three months, citing the request as overbroad and burdensome and finally stating that the requested records did not exist.

For now, Valicenti, with the AG’s office has some words of wisdom for public officials having trouble with IPRA.

“You know what? The legislature has deemed it a right of the public to inspect public records,” Valicenti said. “So if you have any problems you need to address it with your legislator.”