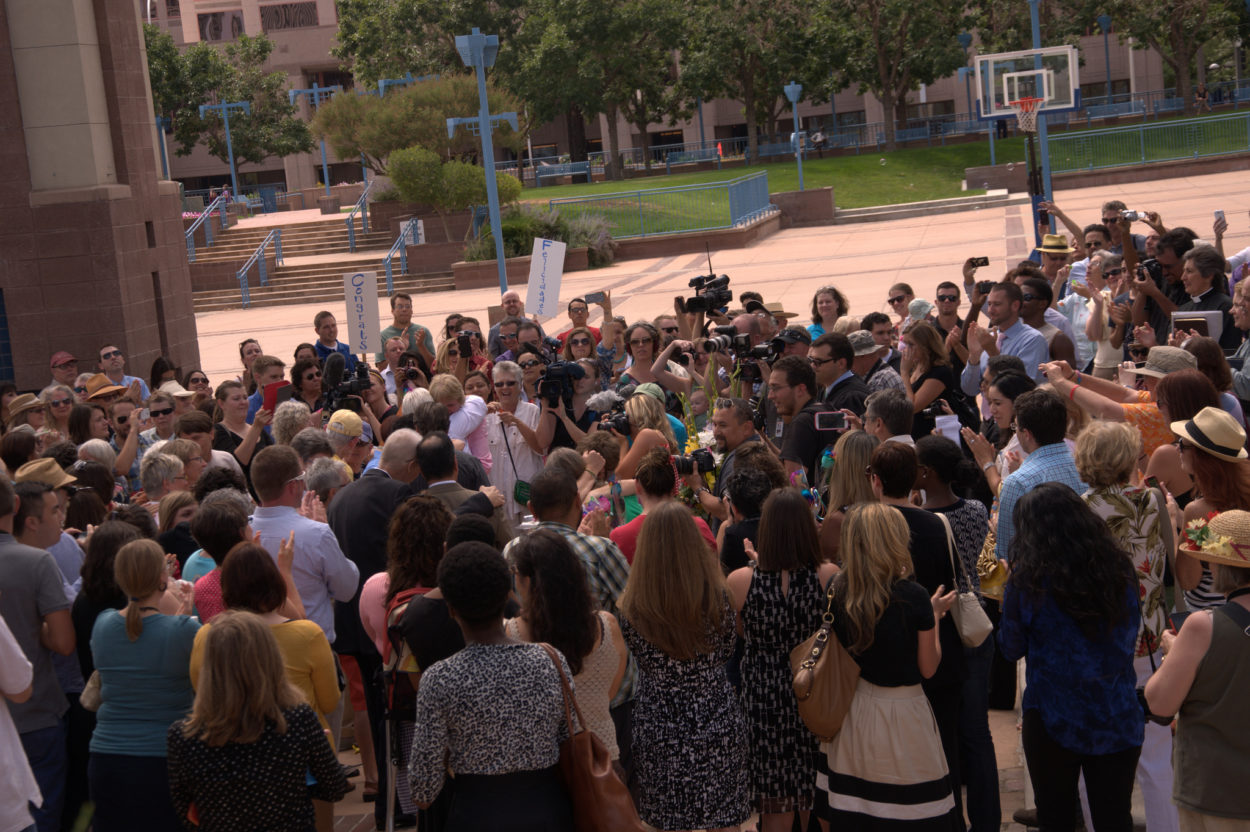 New Mexico was the 17th state to legalize same-sex marriage.

Nationwide, same-sex marriage only became legal earlier this year after a U.S. Supreme Court decision. The opposition to the same-sex marriage has been signified by a county clerk in Kentucky who went to jail rather than give marriage certificates to same-sex couples.

Resign instead of allow same-sex couples to marry

In New Mexico, one county clerk also opposed marriage for same-sex couples. But unlike Davis, Donna Carpenter, the county clerk in Roosevelt County, decided to resign rather than be unable to perform a part of her job and violate the law for her religious beliefs. Deputy clerk Janet Collins also resigned.

Carpenter felt she was elected on her principles and as a person who stands by their word.

“I felt like I’d be letting down the majority of people who voted for me,” said Carpenter about issuing same-sex marriage licenses.

“I don’t mean any ill toward the gay people at all,” Carpenter said, “I just want to follow my beliefs.”

The Associated Press quoted a Roosevelt County clerk about the resignation.

Commissioner Bill Cathey said the two had made it clear they would quit “rather than be associated with that.”

“She told us in the past that’s what she would do,” he said. “… I am personally very disappointed in the decision of the judges, and I don’t blame our clerk for doing what she did.”

Carpenter’s replacement, DaAun Searl, vowed to do her job without letting personal beliefs get in the way when appointed by the county commission.

“My opinion does not matter, my opinion is irrelevant,” said Searl about the state’s same-sex marriage ruling and any other laws according to the Portales News-Tribune. “I was appointed to do a job and I’m going to do that job to the best of my ability.”

Others in New Mexico have been protesting the law. In Curry County, judges decided to stop issuing marriage certificates—both to opposite and same-sex couples.

In early 2014, the Associated Press reported that judges in Eddy and Chaves County also stopped performing any marriages.

“I don’t have a problem with who wants to get married,” said Eddy County Magistrate Judge Henry Castaneda. “But we don’t have to compromise our beliefs.”

Judges are not required to perform marriages, though county clerks must give out marriage certificates in New Mexico.

A brief history of same-sex marriage in NM

In all, New Mexico legalized same-sex marriage in an odd way, with the practice spreading from county to county for days until finally the Supreme Court decided to step in. It started in Doña Ana County, where clerk Lynn Ellins began issuing marriage certificates to same-sex couples on August 21, 2013.

When a District Court judge ordered the Santa Fe County Clerk to do so as well, it seemed to open the floodgates. Bernalillo County followed. So did Taos, San Miguel and Valencia counties, then Grant County. The Los Alamos County clerk, Sharon Stover, initially did not issue the certificates but was ordered to by a state District Court judge. Stover was the first clerk to challenge the ruling.

This was the last county until the Supreme Court ruled on December 19, 2013 that the state constitution did not allow discrimination against same-sex couples who wished to be married.

Any half-hearted efforts to overturn the decision by a constitutional amendment would have been rendered moot when the United States Supreme Court decided this summer that same-sex marriage was legal nationwide.