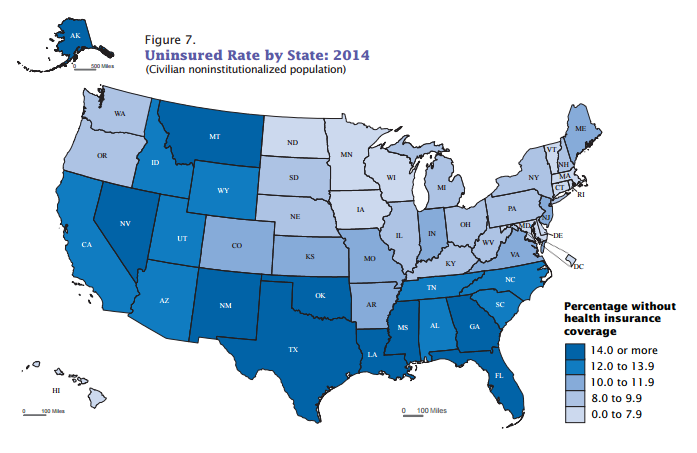 Uninsured rate by U.S. State via the U.S. Census Bureau.

Another study has found that the amount of uninsured New Mexicans fell since the passage of health care overhaul legislation.

This time, the U.S. Census Bureau released data on Wednesday that showed the uninsured rate in New Mexico fell from 18.6 percent in 2013 to 14.5 percent in 2014, one of the largest drops in the nation.

Nationwide numbers showed a drop from 13.3 percent to 10.4 percent.

The numbers are in line with other recent uninsured rate numbers that showed improvements both in New Mexico and nationwide.

A Gallup poll from earlier this year showed New Mexico’s uninsured rate at 13.1 percent, from 20.2 percent in 2013.

A poll by Latino Decisions found large drops in the uninsured rate for Hispanics in New Mexico—from 23 percent in 2013 to 8 percent in 2014.

But, as the New York Times said in reporting on the uninsured rate, the U.S. Census Bureau numbers are considered the most authoritative.

Uninsured rate by U.S. State via the U.S. Census Bureau.

The largest difference between the two years is the implementation of the Affordable Care Act, the healthcare overhaul that was signed into law by President Barack Obama.

New Mexico is also aided by the fact that the state accepted Medicaid expansion; this is something other states with Republican governors have not done and their uninsured rates have not dropped at the levels of the states with the expansion.

“This Census data represents great news for all New Mexicans. Ensuring that everyone can see a doctor when they’re sick makes the state’s population healthier and it’s a good prescription for our economy,” García said. “Clearly the Affordable Care Act is working, as hundreds of thousands of previously uninsured New Mexicans now have health insurance.”