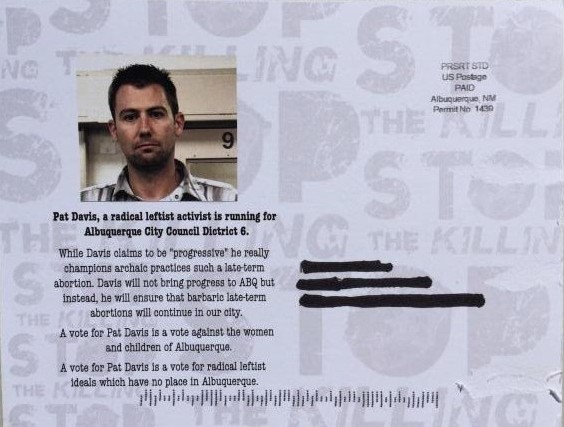 An anti-abortion group is getting attention for targeting an Albuquerque city council candidate with graphic imagery and one of their mailers is being investigated by the city’s ethics board.

Protest ABQ, the group that sent the mailer, isn’t registered with the city as an Measure Finance Committee, which is required to be in order to send material opposing a political candidate. The mailer also didn’t list the address of Protest ABQ or the printer of the mailer, which city campaign rules require.

Sent out last week, the mailer shows a picture of what’s purported to be a bloody fetus from a “late-term” abortion and a woman who the mailer says “died from LEGAL abortion.”

“Davis champions this…” the mailer reads above the graphic photos. “And you can expect more of this if he’s elected.”

On the back of the mailer is a mugshot of Davis’ 2013 DWI and the words “stop the killing” printed in the background.

“While Davis claims to be ‘progressive’ he really champions archaic practices such a [sic] late-term abortion,” the back of the mailer reads. “Davis will not bring progress to ABQ but instead, he will ensure that barbaric late-term abortions will continue in our city.”

The mailer also says argues for Davis “is a vote against the women and children of Albuquerque” and for “radical leftist ideals which have no place in Albuquerque.

Albuquerque is one of a handful of cities with a clinic that performs abortions after 20 weeks of pregnancy, called late term by some.

Davis, the Democratic frontrunner, faces Hess “Hessito” Yntema, a Republican attorney, and Samuel Kerwin, a University of New Mexico student and Democrat in the Oct. 6 election.

Davis is the executive director of ProgressNow New Mexico*, which in 2013 was part of a coalition of groups that successfully fought a ballot measure to ban late-term abortions in the city.

Last week, Alex Curtas, who works as ProgressNow’s* managing director, filed a complaint to the city’s ethics board about the mailer that alleges Protest ABQ’s failure to register as an MFC violates city law.

Protest ABQ’s executive director is Henry “Bud” Shaver, who with his wife Tara played a key role in organizing the 2013 ballot initiative through ABQ Voters for Late-Term Abortion Ban. Both the Shavers and Davis have been active on opposing sides of the abortion issue in Albuquerque for nearly four years.

The Shavers are known for their outspoken methods of protesting the issue, which have including picketing the homes of lawmakers who’ve voted against anti-abortion legislation and even the home of the top political consultant of Gov. Susana Martinez, whom they’ve criticized for not giving the issue enough attention.

“The mailer was just intended to be educational,” Tara Shaver told New Mexico Political Report in an interview. “We really believe that the people in District 6 deserve to know where the candidates stand on different issues.”

She called the complaint “Pat’s way at trying to get back for outing him,” noting that Davis hasn’t come out opposing late-term abortion since (Davis’ campaign said in a recent statement he doesn’t “believe for a minute that city hall has any business getting between a woman and her doctor on medical issues, so we’ll just have to agree to disagree”).

As for not properly registering the mailer or Protest ABQ with the city?

“I didn’t really think of that because it’s not like we’re telling people to vote for someone else,” Tara Shaver said. “This is what you’ll get if you vote for him.”

District 6 is home to two clinics that provide abortions—Planned Parenthood and the University of New Mexico’s Center for Reproductive Health.

Tara Shaver would not say how many mailers Protest ABQ printed and distributed, noting the pending Ethics Board investigation. Davis, however, said his campaign estimates that number around 2,000 were sent out “based on door-knocking and conversations.”

Just over 4,000 voters from District 6 cast ballots in 2007, the last time the city council seat had a competitive race.

On Wednesday, the city’s ethics board voted unanimously to move forward with Curtas’ complaint, referring it for a preliminary hearing between both sides that must take place within 20 days from the Shavers’ receiving notice from the board.

Davis’ home and neighborhood is also being targeted this week by a truck with blown-up images of graphic fetuses. The truck is associated with Protest ABQ.

Davis said the anti-abortion campaign are backfiring in his neighborhood, which he calls “very progressive.” He said his campaign saw a spike in volunteers and yard signs since the protests began.

“Almost exclusively, everyone is horrified,” Davis said in an interview. “This is a conversation for adults to have, and these tactics are designed to keep people away from the polls and force parents to have uncomfortable conversations with kids.”

Davis said if elected he’d work on curbing anonymous mailers and robocalls, noting that the ethics board isn’t proactive and that campaigns instead have to deal with the problems when they happen.

“That’s not their expertise nor do we have money from the city’s campaign fund to do so,” Davis, who is using public campaign financing, said.

This isn’t the first time groups the Shavers have been accused of violating ethics issues. Last year, the New Mexico Religious Coalition for Reproductive Choice made an IRS complaint against Project Defending Life, which the Shavers were formerly associated with.

The Shavers left Project Defending Life in January, but Tara Shaver said nothing came of the IRS complaint.

“That was just another attempt at trying to put something on us,” she said.

Correction: A previous version of this story said the Shavers worked with Protect Albuquerque Women and Children on the 2013 ballot initiative. The group they worked with was ABQ Voters for Late-Term Abortion Ban. We regret the error.