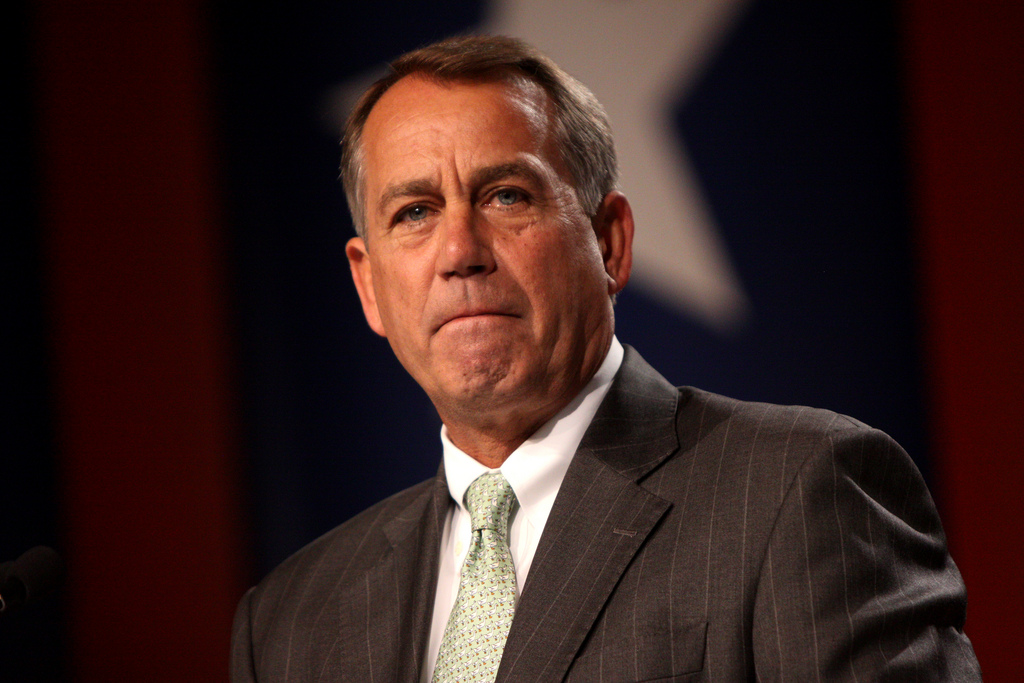 Speaker of the House John Boehner announced on Friday that he would resign from Congress on October 30.

The Republican from Ohio has had a tough time as Speaker, attempting to control an increasingly fractious Republican majority even as that majority seemingly became more permanently ingrained thanks to redistricting.

Boehner had planned to only serve as Speaker through the end of last year, but in his statement announcing his resignation said, “I stayed on to provide continuity to the Republican Conference and the House.”

Eric Cantor, the likely heir apparent to Boehner, was ousted in a shock primary election loss in 2014.

“It is my view, however, that prolonged leadership turmoil would do irreparable damage to the institution,” he wrote. “To that end, I will resign the Speakership and my seat in Congress on October 30.”

New Mexico has three Representatives, two Democrats and a Republican.

“I would like to thank Speaker John Boehner and his family for his nearly 25 years of service to our Nation as a Member of Congress,” Steve Pearce, the lone Republican, said in a statement. “I commend him for his work and wish him well as he enters the next phase of his career.”

Pearce had a strained relationship with Boehner in recent years. Pearce voted for Eric Cantor for Speaker of the House in 2013 instead of Boehner. He later called this his most popular vote ever. Pearce did vote for Boehner for Speaker this year.

Earlier this year, Pearce was booted from the Republican whip team after he voted against House rules that the leadership pushed for on a trade bill.

Ben Ray Luján, through his role as chair of the Democratic Congressional Campaign Committee, said it was an indication that “House Republicans have demonstrated that they cannot govern responsibly on behalf of hardworking Americans, putting infighting over governing and extreme positions over progress.”

“Unfortunately, a change in Republican leadership won’t change the Republican agenda and power of the right wing within their Caucus,” Luján continued. “The American people are watching, and I share their frustration with this regrettably typical dysfunction. Republicans will be held accountable at the ballot box next November.”

Rep. Michelle Lujan Grisham wondered what would come next with a new—presumably very conservative—Speaker.

“Unfortunately, Speaker Boehner was the most reliable force within the Republican Caucus in terms of trying to govern. Without him, I fear the Republicans are headed toward more instability and dysfunction at a time when we need leadership in the House.”

Both Luján and Lujan Grisham voted for Nancy Pelosi, D-Cali., for Speaker.

What’s next for the House

Boehner has been Speaker of the House since 2011, when Republicans took back control of a majority of the House. He had previously been House Majority Leader and House Minority Leader.

Boehner’s stepping down will likely mean that the government is not shut down.

Following Boehner’s announcement, House Republicans said there was agreement to pass a clean spending bill to avert a government shutdown. Several members of the Freedom Caucus, the conservative group which led the revolt against Boehner’s leadership, said they will now support the spending bill without demands to defund Planned Parenthood attached to it.

“The commitment has been made that there will be no shutdown,” said Rep. John Fleming (R-La.).

Pearce had been among those calling to not fund the federal government over Planned Parenthood funding.

“Today, my heart is full with gratitude for my family, my colleagues, and the people of Ohio’s Eighth District,” Boehner said in a statement. “God bless this great country that has given me—the son of a bar owner from Cincinnati—the chance to serve.”