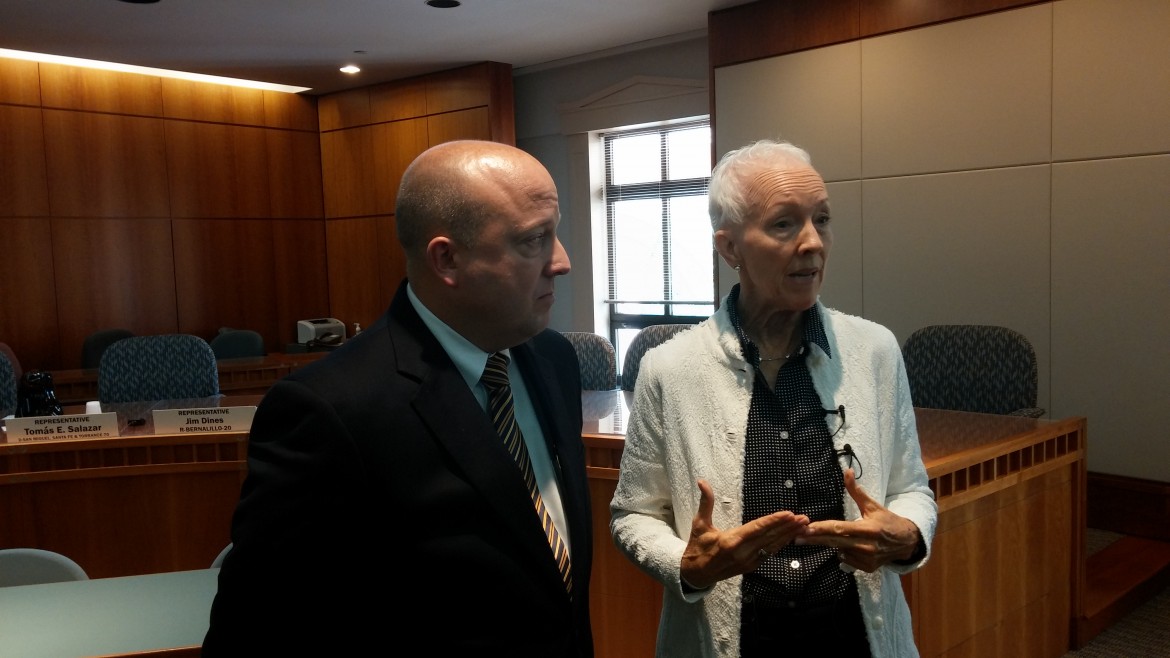 If the first meeting of a Special Investigatory Committee looking into impeaching Secretary of State Dianna Duran was any indication, the journey between now and possible impeachment will be long and grueling.

But the special committee won’t meet again for another month, and any actual impeachment action by the full House of Representatives would have to happen during either a general legislative session or an extraordinary session. The next general session begins January 2016.

In the meantime Duran, who Attorney General Hector Balderas charged with illegally using campaign money for personal use, is digging her heels in and refusing to resign from office.

Lawmakers at the Monday morning meeting never ceased to emphasize the seriousness of their task at hand.

Cook took note of the weight the committee is carrying, calling the proceedings “among the most grave and solemn” that state representatives “will ever be called upon to perform.”

“It is a duty that must be performed free from the influence of politics and free from the temptation to seek individual attention or advantage,” he said at the meeting.

Chasey underlined that the special committee is “committed to fairness, justice and transparency.”

“While we’re being called upon to judge the conduct of the Secretary of State, so too will our conduct be judged by the people of New Mexico,” she said at the meeting.

Duran is charged with taking up to $13,000 from her campaign coffers for personal use. She also allegedly withdrew hundreds of thousands of dollars in her personal bank account at casinos throughout New Mexico at the same time.

Attorney General Hector Balderas filed a 64-count criminal charge against Duran in August. Duran pleaded not guilty to the charges earlier this month in District Court in Santa Fe.

The impeachment proceedings, which could lead to removal from office if the House votes as a majority to impeach and the Senate convicts in a trial, are separate from her legal charges.

“The criminal charges and our proceedings have no bearings on each other,” Chasey said.

In the case the House does vote to impeach, Duran would be barred from performing duties as Secretary of State while undergoing a trial by the Senate. If acquitted, she would be able to resume her duties, Cook said.

State Rep. Bill Rehm, R-Albuquerque, made note of difficulties the committee could run into in the coming months.

Rehm said he looked through state campaign laws and contacted the Secretary of State’s Office, which is ironically tasked with enforcing campaign ethics rules, to see how the committee could “circumvent” the task at hand.

But instead of finding answers, Rehm said he ran into more questions.

“It appears to me that an individual—I agree this is [an] ethical [issue]—there’s not a criminal violation for me to borrow money from my campaign,” he said at the meeting.

Rehm added that he’s like Legislative Counsel Service to “research that and tell us if there’s an ethical violation, is there a criminal violation and is there any case law that we have on that.”

“And if it turns out that’s not a violation, please open a file up upstairs and draft legislation next session,” he said.

Still, impeachment can happen without a separate criminal conviction.

The special committee is using rules identical to the 2011 special subcommittee that looked into impeaching former Public Regulation Commissioner Jerome Block Jr. This includes a issuing a recommendation of impeachment is there’s “credible evidence” to warrant so.

The committee scheduled a tentative second meeting for Tuesday, Oct. 27 in the state capitol in Santa Fe.