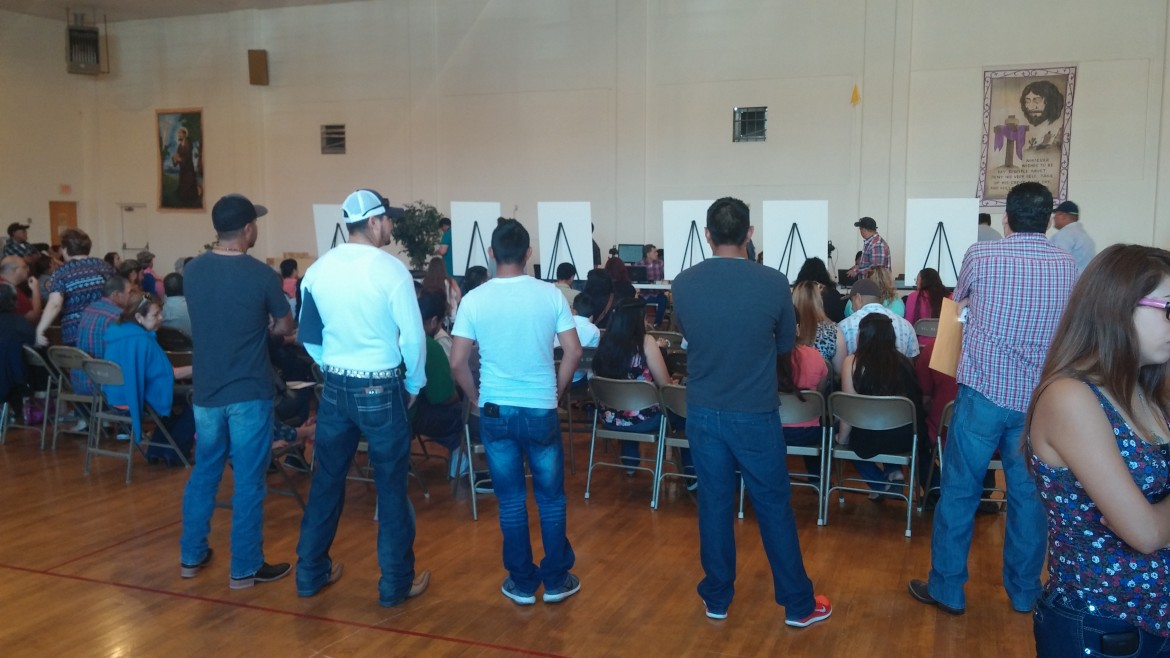 ROSWELL – In a packed gymnasium, Vanessa Tarango canvasses a crowd gathered to take advantage of public hours being held today by Consulate General of Mexico in El Paso.

Tarango is a member of Somos Un Pueblo Unido, a statewide immigrant rights advocacy group that’s here to recruit new members. She and half a dozen other canvassers are scattered throughout St. Peter’s Parish gym in downtown Roswell.

Here, flocks of people are waiting in line for help with their immigration documents, which include green cards and consular identification cards.

Separate from the Mexican Consulate booths, several volunteers are seated at tables for law firms that work on immigration issues, health organizations and charities. Somos’ booth, however, is empty. Instead, members are approaching people waiting in line to speak with Consulate staffers.

“No one ever comes to the table,” Somos organizer Marina Piña said.

Their work has centered around pushing for immigration reform, combating wage theft, and opposing Gov. Susana Martinez’ attempts to bar undocumented immigrants from obtaining driver’s licenses—issues that lean decidedly to the left.

On the surface, Roswell seems an unlikely place for this type of political organizing. As far as ideologically shades go, the city’s is deep red. Republicans dominate city and county governments. All the state lawmakers in the area are Republicans.

But the city’s demographics are rapidly changing. Latinos have officially made up the majority of Roswell since 2010, when the U.S. Census estimated they made up 53 percent of the population. This marked a 9 percent growth in the Latino population since the previous U.S. Census survey in 2000.

While Republicans gained some ground on the Latino vote in the 2014 elections over 2010, nearly two-thirds still cast ballots nationally for Democrats that year.

In southeast New Mexico, organizations like Somos, which claims 2,000 members in the region, are gaining ground. Organizing the growing Latino community like this is what Piña and others say will lead to change here.

Piña cites the area’s Republican congressman, Rep. Steve Pearce, and his opposition to the DREAM Act, which would allow a path to citizenship for undocumented immigrants who came to the U.S. as children, as an example of area politicians not meshing with the growing segment of the population.

“We don’t have any representation as far as legislators who see the needs of our community,” Piña said.

Part of Somos’ mission today is to get people registered and to the ballot box in next year’s elections.

“My main goal is to get legal residents to become citizens,” Tarango said.

Residents who become citizens by December are eligible to vote in the 2016 primary elections.

Armed with a clipboard, Tarango approaches a man and woman seated near one of the gymnasium walls. When Tarango starts to talk, the woman is receptive.

After introducing herself, Tarango finds out that the woman’s husband is a legal resident who can apply for citizenship. Tarango registers her as a new Somos member, which costs $20 per family per year.

Tarango joined with Somos last year at the encouragement of her mother, who earlier migrated to the U.S. from Mexico. She became a member after attending a community meeting where she met Piña.

It’s not just Somos doing this kind of work at the gym today. Seated at a booth for Catholic Charities is Cristina Roberts, who traveled to Roswell this weekend from Las Cruces. She’s currently speaking to a man who’s father is a U.S. citizen and wants to help his son become one.

Roberts, who originally hails from Chihuahua, was in a similar situation eight years ago.

“I went through a similar process because I got married to a U.S. citizen,” she said.

Another topic permeating conversations at the gym today is that of worker’s rights. Much of the local Latino community, including Tarango’s father, work as laborers at area dairy farms. Until recently, they weren’t guaranteed worker’s compensation when they encountered injuries on the job. But in June the New Mexico Court of Appeals ruled that excluding the benefit from dairy farm laborers violated the state constitution.

Piña said she’s heard several stories about dairy farms only giving out safety guides written in English and not posting signs in the workplace about workers’ compensation rights.

Piña is here at the gym too, talking to a middle-aged man wearing jeans, a blue plaid shirt and brown boots. He tells her about wage theft and injuries on the job.

“We can have a law, but if it’s not implemented it’s not going to serve anyone,” Piña said.