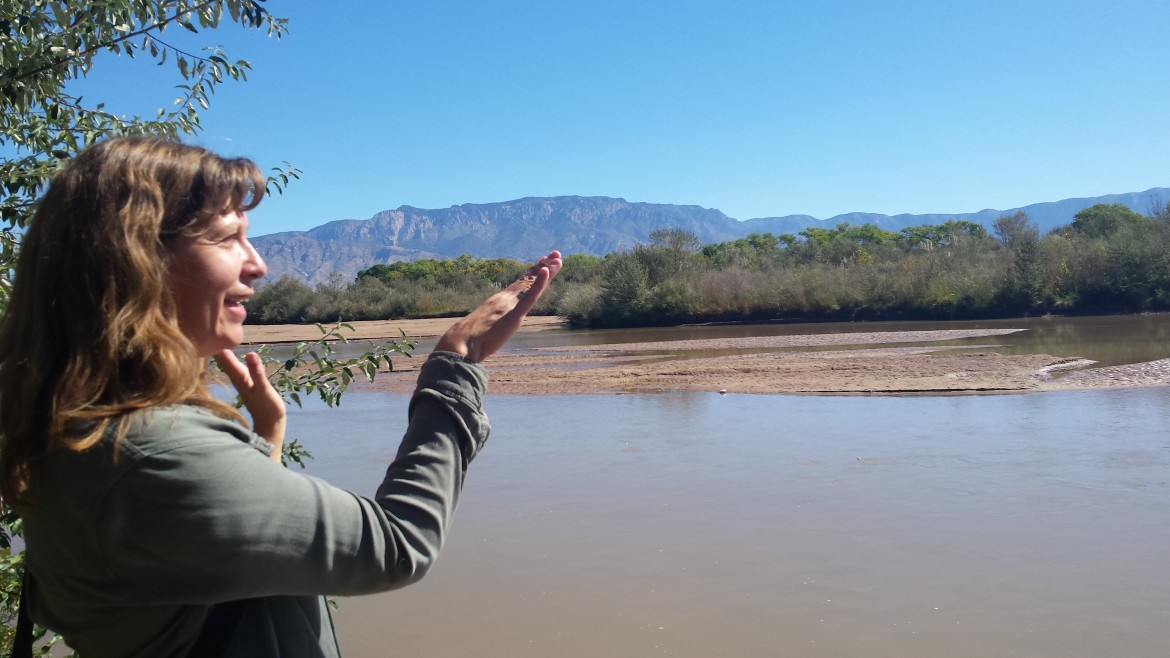 This week marks the start of a new, ambitious journalistic project aimed at focusing on climate change and how it affects New Mexico.

Independent journalist Laura Paskus is teaming up with New Mexico In Depth, a non-profit, online publication, to take a deep look at how policy and science play into our local ecology.

She seems like the ideal person to take on the project.

She has been covering environmental issues in New Mexico as a freelance reporter for multiple media outlets for almost a decade.

Earlier this week, Paskus took New Mexico Political Report through brush along the Rio Grande just outside of Albuquerque.

At the Northwest edge of Albuquerque is a small dirt parking lot adjacent to the Rio Grande. A dirt path runs along the edge of the river. Slightly diverging from the obvious path is an almost unnoticeable trail covered with eight to ten-foot tall willow and even taller cottonwood trees.

A two minute walk significantly reduces the sound heavy traffic nearby Alameda Boulevard. Walking a little farther reveals a small, carved out bank along the river. This is where Paskus stopped to show how low the river is.

As she pointed to how low the water level was in the river, she said it’s hard to place blame with one person or even one entity.

“I think ten years ago when I was reporting on this, it was really easy to say, ‘That’s the bad guy and they’re not doing enough,’” Paskus said of water users in the state. “I don’t know if I’m just getting older, but I think I have more sympathy for everybody trying to work on these issues.”

Paskus said instead of pointing fingers and trying to place blame, a better solution is to get stakeholders involved in the conversation about climate change and how much water is being used in New Mexico.

“The solution, really is for citizens to become more engaged in the process and to actually pay attention to the fact that there is a river,” Paskus said.

It doesn’t take a stretch of the imagination to see why she refers to the river as “living.”

As Paskus points to the huge sandbar stretching nearly across the width of the river, a hawk flies overhead and numerous insects make their presence known—visually and audibly. Paskus told New Mexico Political Report she often comes across porcupines high in trees as well as the occasional coyote prowling the river bed. This area just minutes from a busy road, Paskus said, is an example of nature meeting with urban living.

It’s easy for commuters to drive over the river without blinking an eye and water levels. Still Paskus said she hopes her reporting will open the door to more conversations.

She said conversations should be about how much people care about the river and not “just whether there’s going to be a crushed gravel path along side of it, but what’s actually happening in the river bed itself.”

Paskus moved from the east coast to the Southwest to work as an archaeologist, but said most of her reports ended up in a filing cabinet somewhere.

“I really wanted to be able to work on projects that I was learning about cool things and also sharing with the public—the people whose communities these are,” Paskus said.

Paskus said her job in contract archaeology on tribal lands eventually led her to a job as a reporter in Colorado.

“I left my job in archaeology and got an internship at High Country News and at the end of the internship, I got hired on as an assistant editor,” she told New Mexico Political Report.

Paskus said what she didn’t realize until recently is that there is little, legally speaking, stopping rivers in New Mexico from drying up completely.

“Legally, it’s totally ok if any of our rivers could just dry up. You could use all the water in all of the river and that would be ok,” she said. “That kind of freaks me out that rivers don’t have rights to their own water.”

Paskus said her new venture with New Mexico In Depth is a way for her to cover climate change in a more substantial way than she has before.

“I’m always having to cover climate change in this real piecemeal way,” she said. “I feel like that’s kind of doing a disservice to New Mexico.”

Paskus’ first to pieces on climate change, New Mexico and its environment are on the New Mexico In Depth website. Her first piece was an essay and on Friday she wrote about the difference between climate and weather.