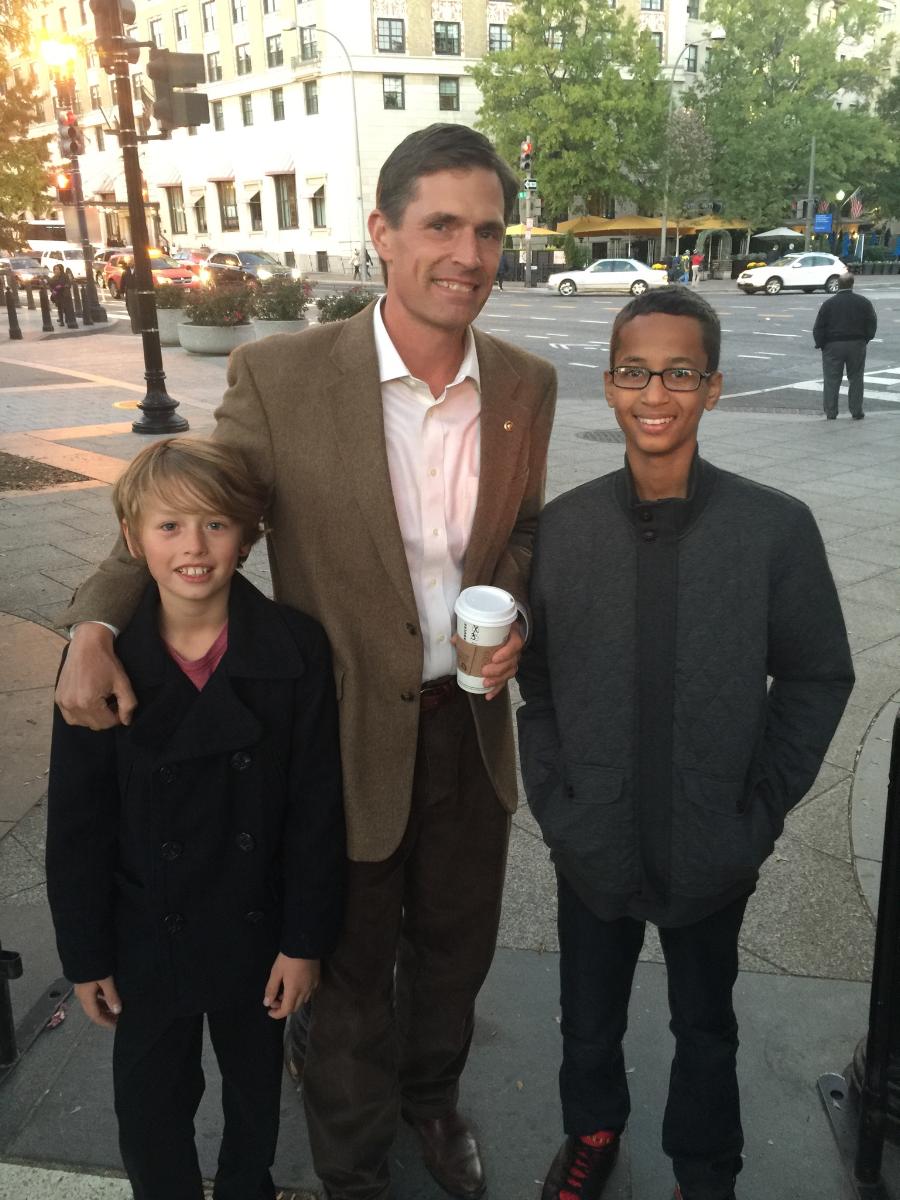 Senator Martin Heinrich was at the White House’s Astronomy Night with his wife and son when he ran into a celebrity of sorts.

Ahmed Mohamed, the 14 year old boy who was arrested after building a clock and bringing it to school, finally got his promised chance to meet President Barack Obama.

He also met others, including Heinrich and his son, as shown by an image that showed up on Heinrich’s social media pages, including Twitter and Instagram.

New Mexico Political Report reached out to a spokeswoman, who said that the Senator, his wife Julie and younger son Micah happened to be in line at the same time as Mohamed.

“He was excited to learn there is an engineer in the Senate,” the spokeswoman wrote.

Mohamed has said that he wants to one day become an engineer. Heinrich has a Bachelor of Science degree in Mechanical Engineering from Missouri University and worked as a contractor at Phillips Laboratories in Albuquerque.

Mohamed became the focus of international headlines after he brought a homemade clock to MacArthur High School in Houston and school officials called the police.

Police arrested Mohamed, saying that it was a “hoax bomb.” Mohamed was not charged with anything, but he was suspended from school for three days.

The public outcry was loud and immediate and reached all the way to Obama, who tweeted about the incident and invited Mohamed to the White House.

Cool clock, Ahmed. Want to bring it to the White House? We should inspire more kids like you to like science. It’s what makes America great.

Mohamed showed up to Astronomy Night on Monday night—without a clock. Some conservatives have been critical over the invite, such as Heinrich’s colleague in the Senate, Ted Cruz of Texas. Cruz, who is also running for President, said that the Mohamed was being used as a way to “divide” the country by Obama.

Mohamed, whose father is a Sudanese immigrant and has run for president in that country, met with Sudanese President Omar Hassan al-Bashir earlier this month. Bashir is accused of war crimes.

Heinrich, his wife and son also met others at the Astronomy Night, including the stars of the Discover Channel TV show Mythbusters.

The Astronomy Night was the second annual event held at the White House.