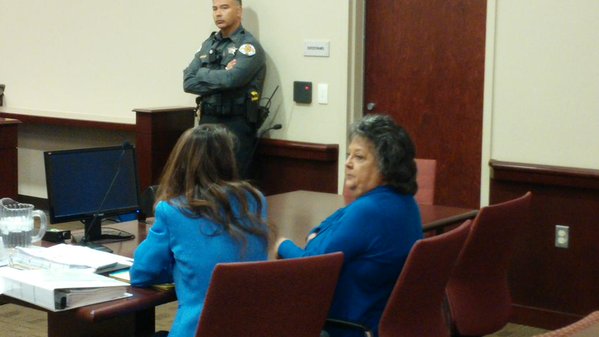 This is a breaking news story. Details will be added as we receive them.

Related Story: Duran spoke to the media outside the courthouse and defended her career.

Based on statements made in court, the plea deal says Duran will face five years supervised probation. In exchange she will resign from her role as secretary of state effective immediately.

The plea deal also included full restitution of $14,000 to campaign donors and required that Duran have no access to public funds.

Perhaps most important to Duran, the agreement said the Attorney General would not seek to revoke Duran’s pension benefits. A 2013 anti-corruption state law would have allowed the state to revoke the benefits when an elected official pleads guilty to a felony.

Judge Glenn Ellington said that Duran would be able to withdraw her guilty pleas if he imposed jail time at sentencing. Sentencing will take place on December 14.

In all, Duran pleaded guilty to three counts of embezzlement, one count of money laundering and two counts of violating campaign finance law.

The state can drop the plea deal if she violates the plea agreement’s terms.

An attorney for Duran said that the plea deal was discussed all week between herself and the lawyers at the Attorney General’s office. There was a delay after Ellington objected to some of the “passive” language in the deal related to the proposed sentencing.

Attorney General staff ran the revised plea deal from his offices to the courthouse (literally) while media and others waited.

In all, Duran faced 65 counts including embezzlement, fraud and identity theft.

The proposed plea deal comes just hours after news broke that Duran was resigning and leaving her position as Secretary of State.

News about her resignation came from an email from a top Secretary of State staffer announcing that a meeting on proposed campaign finance rule changes would be canceled because of Duran’s resignation.

The last statewide official to resign while in office was Robert Vigil. Vigil was State Treasurer when he resigned while facing corruption charges. Vigil was later convicted.