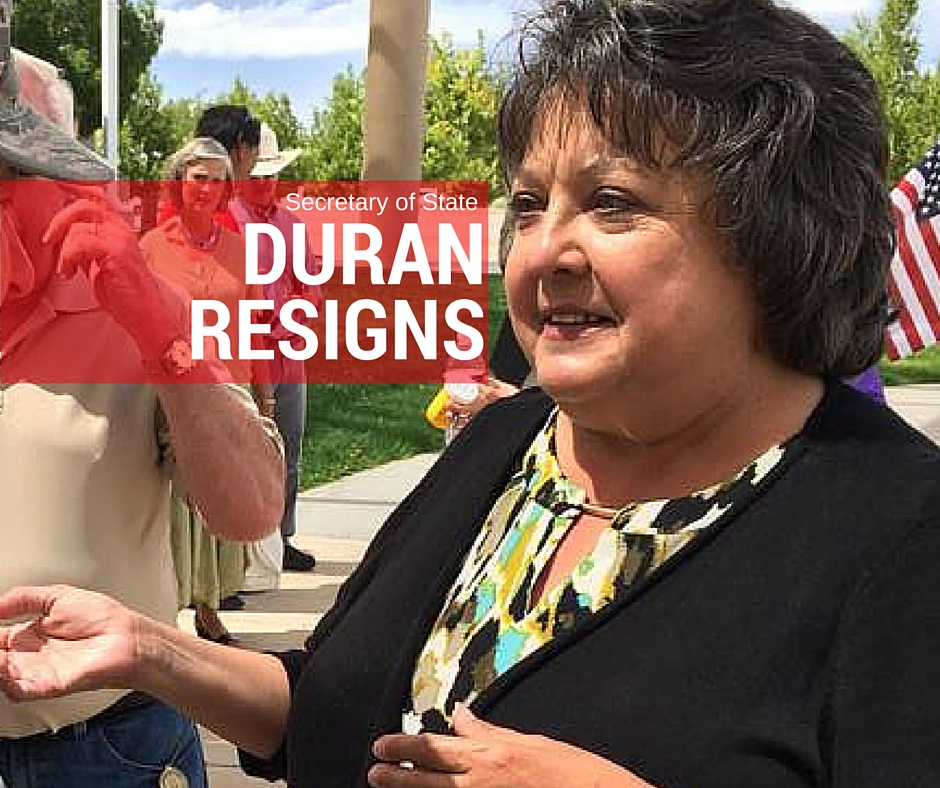 A stream of Dianna Duran news swept the state late last week; she resigned as Secretary of State late Thursday but the news didn’t break until after 1:00 a.m. on Friday. Hours later, she appeared in court and pleaded guilty to six charges, including two felonies.

The resignation wasn’t exactly unexpected; calls for her resignation came almost as soon as Attorney General announced 64 charges (another charge of identity theft was added later) in late August. She faced possible impeachment by the House of Representatives.

Here are all of the stories that New Mexico Political Report wrote about Duran’s case since August.

The dates listed are the dates the stories were published.

8-28-2015 — Sec of State charged with 64 counts involving using campaign cash for personal use: The news that started it all; on a Friday afternoon late in August, Attorney General Hector Balderas filed the charges against Duran.

9-1-2015 — What can cause a Secretary of State vacancy? And what then?: Even from the first days it didn’t seem possible that Duran would stay in office until her term ended in 2018. We looked at the possibilities, from resignation to removal from office and what that would mean.

9-2-2015 — Speaker forming committee to look into impeachment of Secretary of State: A Republican Speaker of the House formed an impeachment committee, another indication that Duran’s time in office was limited.

9-3-2015 — Who will replace Dianna Duran if she leaves office?: Again looking forward, we examined possible names to fill out the rest of Duran’s term. Most of this was focused on Republicans, since Republican Gov. Susana Martinez has a history of choosing Republicans to fill openings.

9-9-2015 — New York Times looks at New Mexico scandals: The Dianna Duran scandal, and others in the state, caught the attention of the New York Times.

9-11-2015 — Two weeks after criminal charges, SOS still MIA: Dianna Duran didn’t show up to the office for weeks after the charges, staying out of public.

9-15-2015 — Lawmakers OK funding for Duran impeachment panel: The Legislative Council approved up to $250,000 in funding for the House Special Investigatory Committee to look into the allegations against Duran.

9-16-2015 — Impeachment committee to meet before end of month: Legislators set the first date for the House Special Investigatory Committee for Sept. 28—exactly one month after the charges against Duran were filed in court.

9-23-2015 — Duran shows up to work: After weeks of staying away from the office, Dianna Duran showed up to work.

9-25-2015 — What to expect from Dianna Duran impeachment panel: We looked ahead at past impeachment meetings and tried to see what would happen at the first such meeting about Duran.

9-28-2015 — Special panel kicks off possible impeachment: The House Special Investigatory Committee met for the first time and gave the co-chairs the authority to hire an attorney to aid in the investigation.

9-29-2015 — House panel names attorney for impeachment investigation: It didn’t take long for the co-chairs to choose Robert Gorence as special counsel for the committee.

9-30-2015 — AG no longer providing counsel to SOS: The relationship between the office of the Attorney General and the Secretary of State was so strained that he said he would no longer serve as counsel for her office.

10-1-2015 — Duran attorney says AG should be pulled from case: Duran’s attorney said that Balderas had an ax to grind with Duran and he should be removed from the case.

10-2-2015 — New charges accuse Duran of identity theft of former state senator: After media reports, the Attorney General’s office added a 65th charge against Duran, this time accusing Duran of using former state senator Don Kidd’s name as campaign treasurer—when he said hadn’t been in contact with her for years.

10-8-2015 — Judge grants delay, Duran hearing wont’ happen until December: Duran’s attorney won one round, when a judge agreed she could have another two months to look at the case.

10-22-2015 — Public will get say on SOS rule proposed campaign finance changes: Even as Duran was facing charges of violating the campaign finance law, she was proposing changes to the rules.

10-23-2015 — Dianna Duran resigns as Secretary of State: The late-night bombshell, as Duran resigned.

10-23-2015 — Duran’s out—here’s what will happen next: First, an appointment by Gov. Susana Martinez, then a mad dash to the 2016 election; we looked at the next steps after Duran’s resignation.

10-23-2015 — Duran pleads guilty to criminal charges: Duran’s day in court came and she left with a plea deal after pleading guilty to six charges.

10-23-2015 — After guilty plea, Duran defends ‘tremendous’ public career: The longtime elected official defended her time in office despite her guilty plea and resignation.

10-23-2015 — Impeachment panel postponed after Duran’s resignation: With Duran no longer in office, the House Special Investigatory Committee had no more need for its Tuesday hearing.

10-23-2015 — Politicos say it’s time to move forward after Duran resignation: When something as major as the resignation of a statewide official happens, there will be reactions. We collected them.

10-24-2015 — Cancelled hearing another consequence of Duran resignation: Those rule changes that the public was going to weigh in on? The public never got a chance, since the hearing was cancelled after Duran resigned.