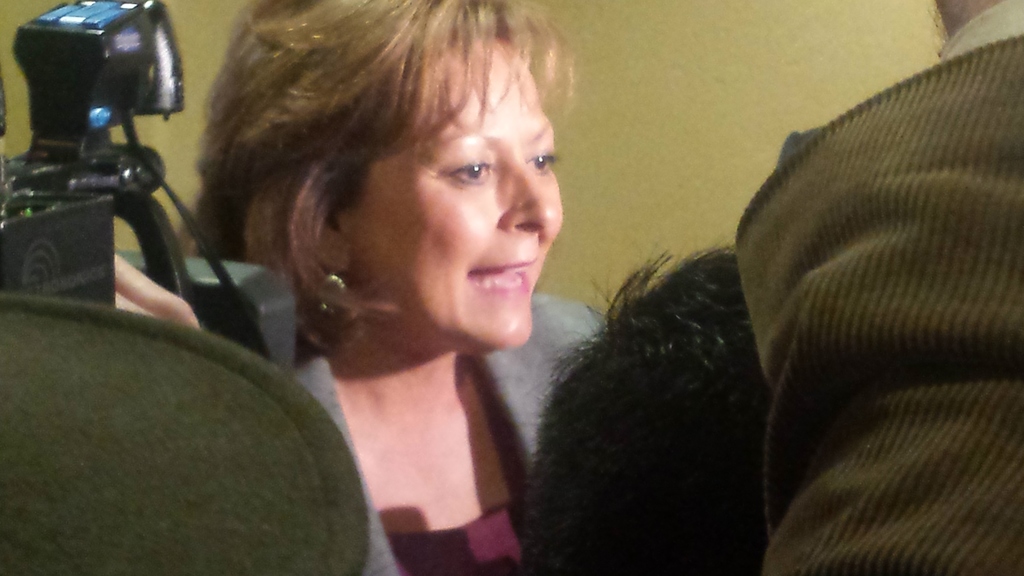 Gov. Susana Martinez dismissed complaints that have led to an FBI investigation of her top political operative, speaking publicly Monday afternoon for the first time in person to reporters about the matter since it rocked news headlines over the weekend.

Susana Martinez speaks to reporters about FBI probes into her adminstration

In doing so, she acknowledged to reporters that federal authorities had talked with her and members of her staff. She also told reporters that she has talked with Jay McCleskey about the investigation which reportedly is looking into money that he controlled.

Her comments follow a revelation by The Santa Fe New Mexican that federal authorities have been interviewing Republicans about Martinez’ campaign fundraising activities and how they relate to McCleskey. McCleskey ran both Martinez’ gubernatorial campaigns as well as political action committees and super PACs in the previous five years.

Martinez gave a statement to the Associated Press earlier in the day. A reporter for The New Mexican, Steve Terrell, said on Twitter that the governor had not given his newspaper a statement. NM Political Report had also asked for a response from her office.

A separate report by The New Mexican says that the FBI was looking into possible retaliatory tax audits from the state Taxation and Revenue Department. A Martinez spokesman dismissed these claims on social media but did not respond at the time to requests for comment from NM Political Report.

One former Martinez official, Brent Eastwood, told NM Political Report over the weekend that he has been talking with the FBI for two years about “governance issues” in her administration and has handed over information.

Martinez told reporters that the FBI interviews are based on “claims that have gone back two years from the Jamie Estrada case.” In 2011, Estrada, her former campaign manager, leaked several emails from Martinez staffers’ private accounts. Most of the leaked emails centered around a controversial racino lease deal backed by Martinez and her wealthy donors.

Estrada served time in federal prison for the theft of the campaign emails.

Several have alleged that the racino deal, which went to the Downs at Albuquerque, was rigged. In 2013, former Martinez finance director Andrea Goff told reporters that the FBI had interviewed her about the racino lease.

Martinez said complaints that have sparked the recent FBI investigation are “the same people making the same claims.”

“It’s disappointing that they just keep doing it over and over,” she said. “And yes, I am confident that neither Jay nor anyone else has done anything wrong and that [if] they can’t beat him, they’re just going to smear him.”

When asked whether the FBI has talked to her or any of her staff, Martinez responded by saying, “Sure.”

FBI spokesman Frank Fisher told NM Political Report that he could not confirm or deny whether FBI investigations are taking place. He added that FBI procedures following allegations “depend on the circumstances.”

“It depends on the case,” Fisher said. “Obviously, if somebody is accused of committing a federal crime, there would come a time when that person is approached to ascertain that side of the story.”

Andy Lyman and Matthew Reichbach contributed to this report.

View all Downs at Albuquerque articles →