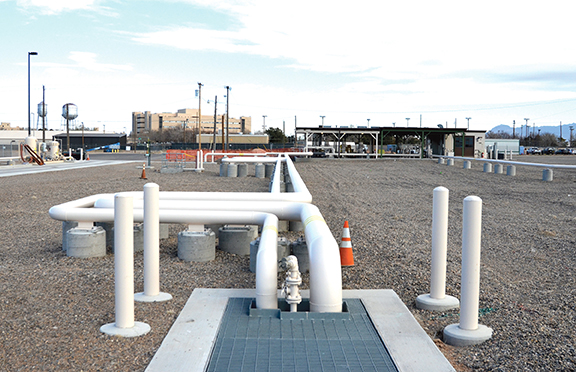 Residents of New Mexico announced their intention to sue the U.S. Air Force over the massive jet fuel spill at Kirtland Air Force Base.

The New Mexico Environmental Law Center announced on Monday that the organization filed a notice of intent to sue the Air Force. Among those in the lawsuit are the Southwest Organizing Project (SWOP) and state senators Cisco McSorley and Mimi Stewart. Four other residents of New Mexico are clients.

The notice of intent is required to give those who will be sued 90 days notice of the suit.

At issue is the cleanup of a leak of jet fuel that will take years or even decades to clean up. The spill is from leaky underground pipes that went on for decades before being discovered in 1999. Estimates by the New Mexico Environment Department have pegged the spill at 24 million gallons, or eight times the recent Gold King Mine spill that received national attention.

An additive in jet fuel, Ethylene Dibromid, is considered highly toxic by the Environmental Protection Agency.

“At this point, a lot of promises have been made by the Air Force and the New Mexico Environment Department, yet they continue to delay a serious cleanup process and keep failing to adhere to their own cleanup deadlines,” SWOP Executive Director Javier Benaviez said in a statement. “The community deserves for the Air Force to pull out all the stops, with real consequences, if deadlines are missed.”

The Albuquerque Journal reported this summer on the latest efforts to address the spill. The costs of the cleanup was already at nearly $100 million at the time.

But last month, the first extraction well began pulling contaminated water out of the ground and feeding it to a filtering system on the Air Force base. That extraction well is expected to be the first of three wells pumping out tainted water before the end of the year. Another four extraction wells are scheduled for 2016.

Later estimates say clean-up efforts by the Air Force may cost up to $125 million more.

“The Air Force is not seriously considering public input on the cleanup plan, has no enforceable benchmarks or deadlines for remediation, and is not overseen by an independent regulator,” NMELC Executive Director Douglas Meiklejohn said. “Efforts to address the spill so far have consisted of wastefully overspending on research instead of making progress on actual cleanup.”

Meiklejohn is also the lead counsel on the case.