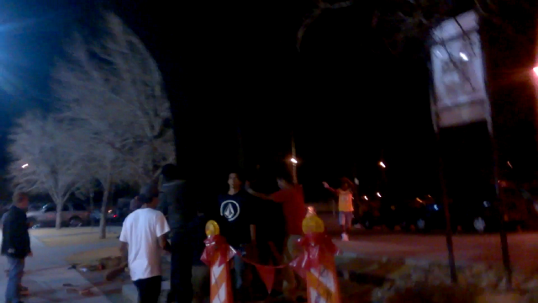 Police say this screenshot of Lewis in the yellow jersey shows him with a gun. His family says it's a glove.

An Albuquerque District Judge has ordered city police to immediately release a cell phone video from a March 22 shooting that left a teen dead and six wounded.

The video, which the mother of slain Jaquise Lewis and others who’ve seen it said shows Lewis was pursued and shot as he was running away, has been the focus of contention since the summer.

Related Story: APD released copies of the video on Friday. You can view them here.

Lewis’ mother, Munah Green, sued the Albuquerque Police Department in July for release of the video and other records from the shooting. APD has said that releasing the video would jeopardize an ongoing investigation into the shooting.

Deaguero cited internal APD policy that he only respond to “breaking news” items during his evening shift.

Deaguero explained that APD defines breaking news as “something that’s considered a threat to the public right now,” whereas investigative news is “news that happened a while back.”

Police say this screenshot of Lewis in the yellow jersey shows him with a gun. His family says it’s a glove.

APD has said Lewis was shot in self-defense and hasn’t charged or publicly revealed his shooter. However, multiple witnesses from that night have said Lewis never had a gun and was killed in cold blood.

City Attorney Jessica Hernandez put out a statement Thursday evening saying that the shooting was a tragedy and that police are currently working on identifying one additional shooter.

“Premature release of information will compromise those efforts and make it more difficult to solve this case,” Hernandez said.

APD spokeswoman Celina Espinoza said in an email the city hasn’t decided whether to appeal the ruling. Espinoza didn’t answer NM Political Report’s question of how the city could still withhold the video Thursday night without appealing the ruling.

Green could not be reached by phone Thursday evening.

In his ruling, Lopez says that APD’s “claim of privilege” on the video is “questionable” because it was shot by a private citizen and not a police officer. The police department’s public release of 13 still images from the video in May and allowing Lewis’ family members and legal representation to view the video in June, “essentially resulted in a waiver of a continued claim of privilege or exemption of the video,” Lopez writes.

Lopez ordered APD disclose other documents denied to Green from her initial public records request in April. These included documents that the police department disclosed the day before trial and later demanded back, arguing that it had accidentally disclosed privileged material.

“Defendant’s allegedly ‘accidental’ disclosure of the documentary submission on November 19, 2015, which it now seeks to be returned, essentially resulted in a waiver of the privilege or exemption under IPRA, and it discredits the City’s claim of privilege/exemption as criminal investigatory records,” Lopez writes.

Lopez also concludes that the city violated the state Inspection of Public Records Act, the penalty of which can lead to fines of up to $100 per day from the day of violation plus paying attorney’s fees for Green.

“The Court will impose this penalty given the extent to which Defendant ignored Plaintiff’s otherwise lawful requests,” he writes.

NM Political Report sought multiple times to view or obtain the video from APD over the past few months.

Lopez wrote a separate legal memorandum ordering the city to release the documents. In it, he reiterates that the city “failed to meet its burden of demonstrating a credible reason for nondisclosure.

Read the ruling and memorandum below: