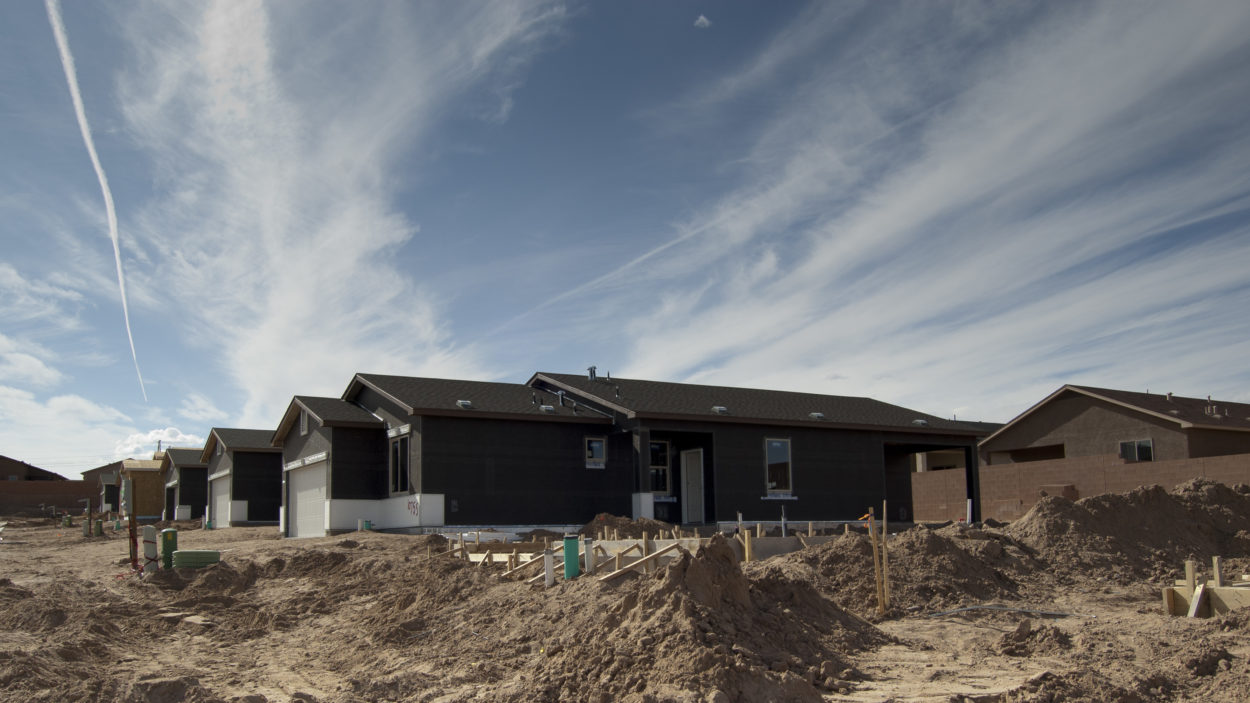 Dense new construction has sprung up in a neighborhood immediately adjacent to the northern edge of Western Albuquerque Land Holdings. Albuquerque’s southwest quadrant also has the highest number of homes at risk of being foreclosed upon. Photo by Margaret Wright

When it comes to owning a home, Albuquerque is the worst city in the United States.

At least, that’s what a report from Fortune released earlier this week said. The financial magazine ranked the 350 largest cities in the United States on home ownership and Albuquerque came in 350th, just ahead of Gary, Indiana.

Data from Zillow, which owns Trulia, shows Albuquerque house values are over twice that of Gary, Indiana.

The magazine looked at various factors since the housing market started recovering at the beginning of 2012. Since then, nationwide, according to Fortune, home values went up thirty percent.

Albuquerque, however, saw a 5.11 percent decline in housing values.

All the data used by Fortune came from the real estate data firm Trulia (home buyers know it as a way to search for homes based on various criteria, including crime rate and home values).

Fortune also used vacancy rates and various labor market indicators, such as employment growth and the change in unemployment rates; Albuquerque has struggled on all fronts since the recession when compared to the nation as a whole, contributing to the rock-bottom rating.

For wages, Albuquerque saw a modest 2.4 percent increase since the beginning of 2012; the top 100 metro average was over twice that, at 5.51 percent.

A Trulia data analyst quoted by Fortune said some of the blame came from a decline in federal government spending.

“Cities like Albuquerque, New Mexico; Gary, Indiana; and Silver Spring, Maryland, were some of the worst places to own post-housing bottom,” Felipe Chacon said. “All of the cities on this list have performed below average on both labor market metrics and housing market metrics.

“In Albuquerque, for example, home of Sandia National Laboratory, Kirtland Air Force Base, and the University of New Mexico, the government sector comprises nearly 21% of all employment compared with 14% nationally,” Chacon continued. “With tight state, local and federal budgets, a more robust employment expansion has been hampered since prior to 2012.”

New Mexico was recently ranked as the worst-run state in the nation.

Correction: A previous version of this story cited Forbes, instead of Fortune, as the source of the study. We regret the error.