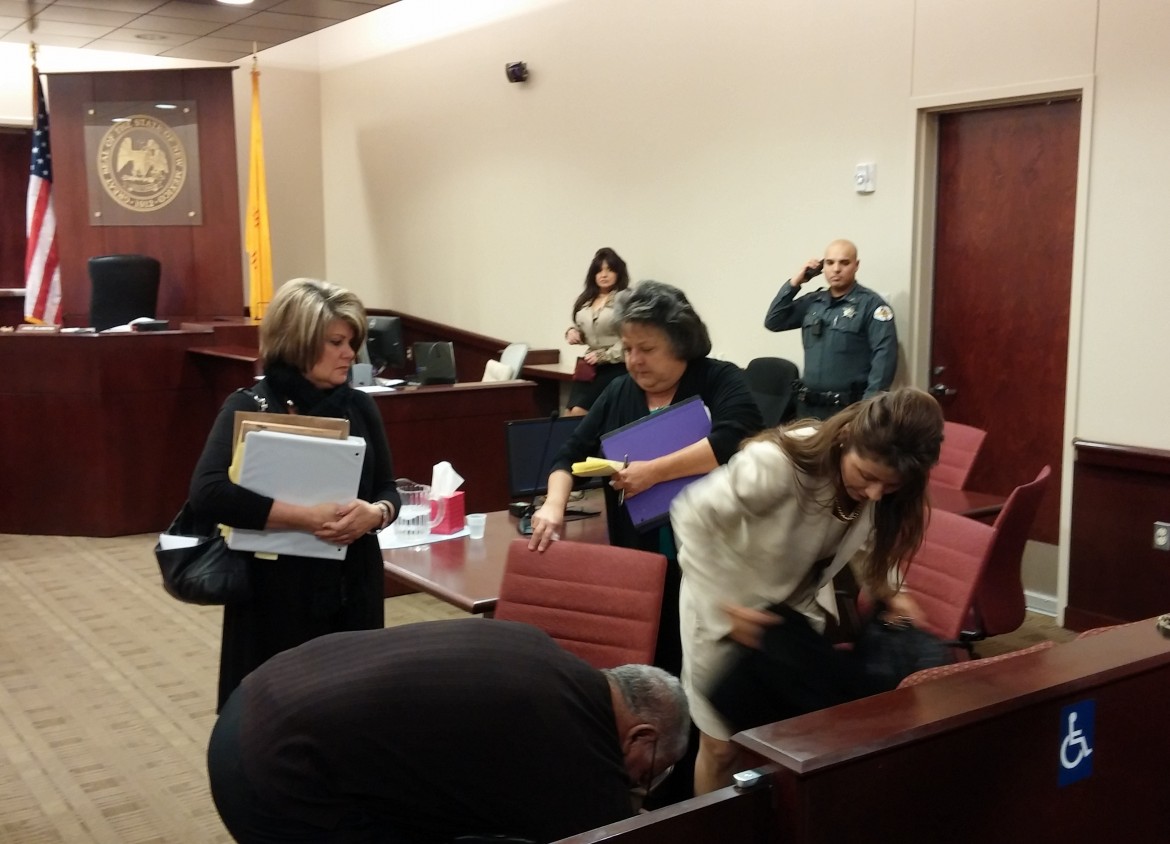 Dianna Duran will spend just thirty days in jail if she is able to abide by terms of release set down by Judge Glenn Ellington on Monday for six crimes she pleaded guilty to earlier this year.

The total sentence is seven and a half years with all but 30 days suspended. The former Secretary of State will serve supervised probation for five years and pay $14,000 in fines and just over $13,000 in restitution.

Jail time or incarceration of any kind were dropped from Duran’s plea deal with Attorney General Hector Balderas, who filed 65 criminal counts against her in August.

Duran pleaded guilty in October to embezzling campaign money for personal use, which she later admitted was part of a gambling addiction. She resigned from office that same month after serving Secretary of State for five years.

Of the six counts that Duran pleaded guilty to, Ellington noted that two of them tied to using campaign money illicitly are “unique charges to candidates for public office” that most New Mexicans charged with crimes don’t face.

“The reason you are here is because you were trusted by the people of the state of New Mexico to enforce the campaign laws,” Ellington said. “And that is a portion of the crime you committed.”

Ellington alluded to previous public officials convicted of crimes in the past and said how many of them did time and “slipped back into anonymity.”

He mentioned how people convicted crimes like DWI and battery must go through programs to “try to restore balance between the community and the individual.”

“But for this type of crime there is nothing in the law that’s equivalent,” Ellington said. “Today we are going to remedy that defect.”

“The swift adjudication of this matter rectifies the public harm done by the criminal conduct of Ms. Duran and saved tremendous taxpayer impeachment resources,” Balderas said in a statement. “The Office of the Attorney General thoroughly investigated the case, which resulted in felony convictions and jail time.

“With this matter coming to a close, this Office will continue to aggressively investigate and prosecute public corruption in New Mexico,” Balderas continued.

Duran will have until noon on Wednesday to decide.

If she chooses to not withdraw the plea, she begins her jail time this Friday, on Dec. 18. Ellington denied a request for the sentence to start after Christmas.

If Duran does withdraw the plea, she will again face all 65 counts, not just the six to which she pleaded guilty.

Ellington characterized the many terms to Duran’s sentence as part of a “restorative justice” framework.

In addition to the jail time and supervised release, the judge ordered 2,000 hours of community service for Duran over the next four years. This is all unpaid and Duran cannot raise any money for the community service. She will also have a GPS monitor for three years with exclusion zones around each casino, racetrack and gambling establishment in the state.

If Duran meets the first two years of her supervised probation with no problems, she will have the opportunity to ask for a withdrawal of the third year of electronic monitoring.

Duran also needs to give at least four public appearances a month (such as school or civic groups) about her life and the crimes she committed. At least 25 percent will have to be in an education setting, where she will speak to students about government and her crimes.

Ellington called the mandated public appearances part of Duran’s rehabilitation process. He characterized many of Duran’s public statements after the plea deal as following “a pattern of rationalization” that addicts use in court to downplay the effect their addictions have on themselves and their friends and family.

Duran will need to write letters of apologies to those she wronged. She’ll also have to write a letter of apology to the state, which must be printed in at least six publications cumulatively distributed throughout the entire state.

Erlinda Johnson, Duran’s attorney, and some of Duran’s supporters made arguments in court that Duran’s misdeeds only did damage to herself. Duran’s ruined public reputation, they argued, was punishment in itself.

Among those who testified about Duran’s character was State Senator Bill Sharer, R-Farmington.

“She didn’t harm anybody but herself,” Sharer said in court. “I believe she violated her own trust and I believe she’s already a high price.”

Ellington later rejected this argument by stating that Duran’s crimes affected the public’s confidence in elected officials “and also the offices they hold.”

“The harm associated with this crime is also public in nature,” Ellington said.

When Duran got her chance to speak to the court, she tearfully apologized to the state and her family for her crimes—a far cry from her tone during her post-guilty pleadings during her comments to the media.

This time, Duran and her attorney left the court without speaking to media.