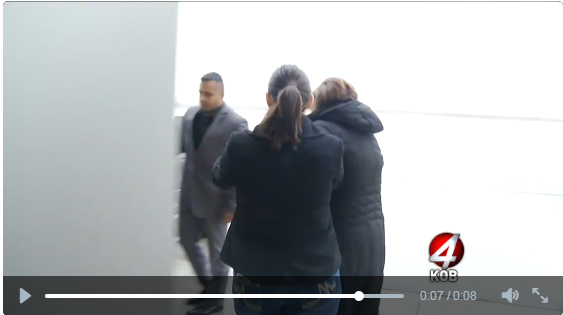 After a bad few days for Susana Martinez, she fled from reporters following an event to welcome home National Guard troops from overseas.

A reporter for KOB-TV, Blair Miller, posted a clip on Twitter of Martinez refusing to answer questions and a member of her entourage slamming a door in the cameraman’s faces as someone asks, “Governor, do you mind if we chat with you?”

Martinez doesn’t even put on her jacket completely while she goes outside.

The event featured Martinez in Santa Fe speaking to 38 National Guard soldiers who returned from a deployment in Kuwait and Iraq. KOB reported “she was quickly shooed off to her strategically-parked vehicle by security detail.”

This came hours after NM Political Report and other outlets reported on new audio released by the city of Santa Fe in which Martinez said there were bottles being thrown. A spokesman previously said that there were only snowballs being thrown.

In the audio, a security guard at the Eldorado Hotel indicated that she appeared “inebriated.” Previous audio included Martinez demanding police, dispatchers and the front desk woman at the hotel tell her who complained about the noise in the room.

The complaints prompted the front desk to call police to escort those in the room off the property.

In the newer audio, the security guard told the police sergeant that they would not be able to remove the governor.

While Martinez would not talk, a spokesman did release a statement to some media outlets. Chris Sanchez did not return phone calls or emails over the past few days to NM Political Report about the incident.

In a statement given to The Santa Fe New Mexican, which did receive a statement, Martinez laid the blame on her staff and denied the bottle-throwing claims.

“The governor is simply repeating the claim that was made to the front desk,” Sanchez said in an email.

“Regardless, the governor apologizes for the conduct of her staff the night of the holiday party,” Sanchez said. “She finds it absolutely unacceptable and plans to address this with her staff – which could include disciplinary action.”

A previous report found that the initial party—before the apparently loud hotel room gathering—cost just under $8,000 in public funds.

Audio files and the fallout from the infamous 2015 holiday party and post-party in a hotel room that caused hotel to call the police on a loud room—one that happened to include Gov. Susana Martinez. Martinez also spoke to police and security.