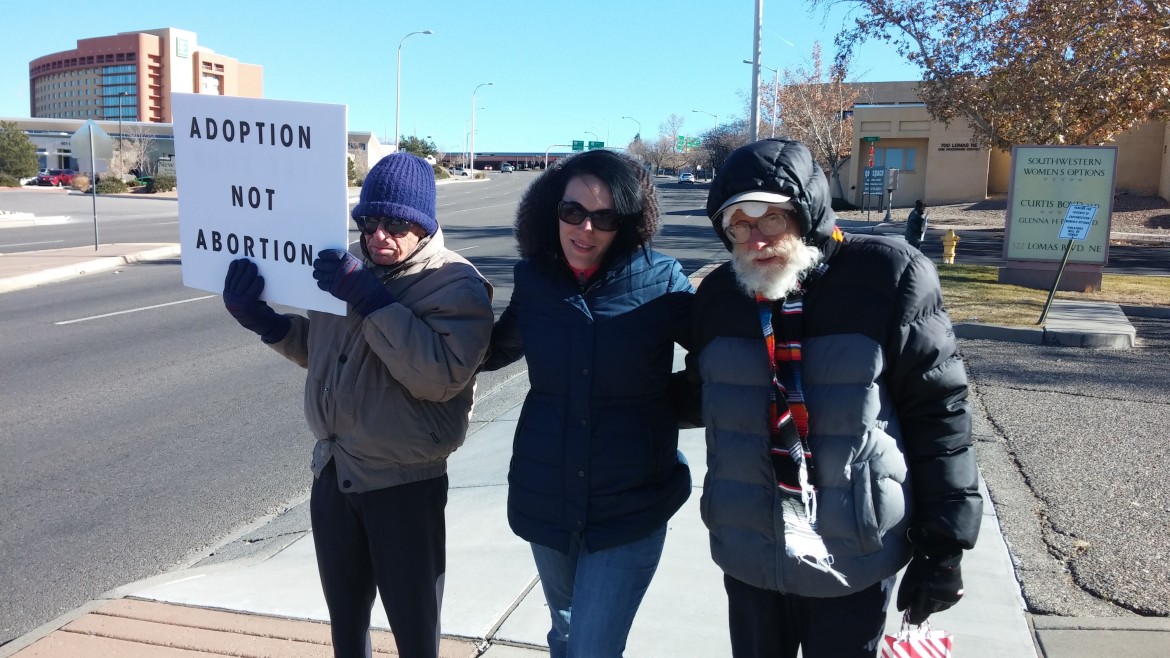 When Philip Leahy, John Rice and Christina Garza come to protest an Albuquerque clinic that provides abortions, they stand on a sidewalk across the parking lot.

“We try to be here all the days that they are open,” Leahy said of Southwestern Women’s Options, which is open on weekdays during normal business hours.

Clad with a scarf, a winter coat and gloves, Leahy explained on a recent chilly weekday that the clinic’s parking lot is private property, and thus he and his fellow protesters are not allowed to step on it. This keeps him at a distance from the clinic’s front door where patients enter.

So his group, Sidewalk Advocates for Life, which opposes abortion, instead tries to wave over women entering the clinic to talk with them.

“If they’ll come over, naturally we have dialogue and present the option, the alternative, which is live-loving and reverence for life,” he said.

The parking lot acts as a buffer of sorts that keeps protesters at a distance with patients while still allowing them to exercise their First Amendment rights.

Whether this was strategic thinking on the part of Southwestern Women’s Options isn’t clear. The clinic declined to comment for this story.

David Cohen, co-author of the book “Living In The Crosshairs: The Untold Stories Of Anti-Abortion Terrorism” released last year, ranks preparation as one of the most important security measures a clinic can take.

“Thinking about the location and the physical space at the outset, for the clinics to do that is really helpful,” Cohen said in an interview with NM Political Report. “You can position yourself in a place that has less access to protesters.”

It’s also one of three major security prongs that all Planned Parenthood clinics follow across the nation.

Each clinic is built in a way “so by the time you park, you can have a little space to walk up to the door and not be screamed at,” she said.

Security measures at abortion clinics came into public focus after the fatal November shooting at a Colorado Springs Planned Parenthood clinic that left three dead and nine wounded. Robert Dear, the man who attacked the clinic, made his motives clear in court when he called himself a “warrior for the babies.”

Abortion rights advocates pointed to his actions as something that came out of the climate surrounding abortion in recent years. Anti-abortion advocates denounced Dear’s actions and distanced themselves from the violence.

While the shooting provoked national attention, it also struck a chord in Albuquerque, which is just a five hour drive south of where Dear attacked a Planned Parenthood clinic. Cowart, who oversees clinics in both Albuquerque and Colorado Springs, personally attended a local candlelight vigil for the women’s health organization one week after the attacks.

“This cannot be the new normal,” she told the more than 100 people who gathered at Albuquerque’s First Congregational United Church in December. “We cannot go on like this.”

Standing at his protest spot outside Southwestern Women’s Options, Leahy called the Planned Parenthood shooting “demented” and stressed that Dear “needs spiritual help, psychological help and to be incarcerated.”

“We look at what happened in Colorado Springs as a tragedy.” Leahy said. “Those three people were innocent and others were injured as well. And so we’re here to defend life, and we hope and we respect life wherever it is.”

Garza added: “We hear that all the time, that we’re named terrorists when that’s not true.”

It’s not enough, of course, for clinics to put security measures on the backburner. Indeed, violent actions against abortion clinics have happened in Albuquerque before.

In 2007, two people broke a window and threw a gas can into a clinic run by Dr. Curtis Boyd, starting a fire that damaged one room. Boyd now runs Southwestern Women’s Options. That same year, vandals set fire to one Planned Parenthood clinic in Albuquerque that provides surgical abortion procedures and smashed windows at another Planned Parenthood clinic that doesn’t.

With the exception of maybe psychiatric wards, abortion clinics across the country put in more security measures than any other type of health clinic. Jodi Jacobson, editor of RH Reality Check, a Maryland-based online publication that reports on reproductive health issues, emphasized in an interview that security measures go far beyond the standard buzzer and video camera.

“Now you’ve got things like safe rooms and emergency plans and clinics having to store bulletproof vests and all these things associated with a warzone,” Jacobson said. “I don’t know of any other health care system that face the kind of measures and safety that reproductive health centers do.”

Jacobson also stressed that women’s health clinics that don’t provide abortions can still be vandalized, such as a Planned Parenthood office in St. Louis last month.

In New Mexico, Planned Parenthood has six clinics spread out in Farmington, Santa Fe, Albuquerque and Rio Rancho. Just one of them, located in Albuquerque, provides surgical abortions.

Security guards must be aware of what’s happening in and around the clinics “because everybody else is busy serving patients. Staffers must be trained to handle harassing phone calls and how to handle protesters and intruders.

As far as preventing another Colorado Springs-type massacre, Cowart said just days after the shooting that her organization is “already in the process” of making changes.

“We assess our security measures, I’m not exaggerating when I say almost daily,” Cowart told NM Political Report. “We’re constantly assessing and tweaking and improving. And as with all the schools that have dealt with a shooter, or the movie theaters or the fill in the blank where these things are happening with greater frequency, everybody steps back and looks at what happened.”

Independent abortion providers like Southwestern Women’s Options write their own sets of security measures. Some focus more on security. Others put the emphasis on the patient.

“You have to separate patient access with patient comfort,” Cohen said. “It might not be best for a patient to talk to a provider through bulletproof glass.”