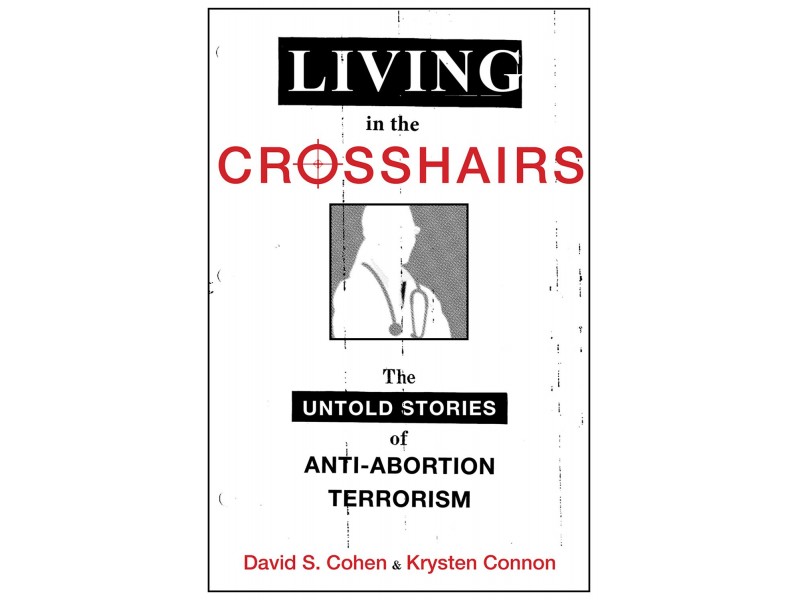 Living in the Crosshairs: The Untold Stories of Anti-Abortion Terrorism by David Cohen and Krysten Connon.

Living in the Crosshairs chronicles anti-abortion violence in America

But no clinic follows a uniform security policy per se. David Cohen, co-author of “Living in the Crosshairs: The Untold Story of Anti-Abortion Terrorism,” spent three years interviewing 87 abortion providers in 34 states about the safety of their clinics.

“At the outset, every clinic and every provider walks it differently,” Cohen said in an interview with NM Political Report.

Each clinic, he said, must balance providing strong security without alienating its patients. Much of the time, Cohen saw stronger measures like bullet-proof doors and bullet-proof glass in waiting rooms.

“Providers who had to take more extreme security measures lamented what it felt like for patient comfort,” Cohen said. “Other providers that didn’t take these security measures said they think it’s important to make patients feel comfortable.”

That said, Cohen argued that all abortion clinics must consider “the history of anti-abortion violence in this country.”

That violence came into the public spotlight after Robert Dear fired gunshots at a Planned Parenthood clinic in Colorado Springs last November, killing three and wounding nine. Cohen said Dear’s actions partly escalated that history of violence because he killed first responders “who were not associated with the clinic” as well as clinic staffers working in patient support.

“This is the first time patient support people died,” Cohen said, “but they’ve been victims before.”

Albuquerque is part of that violent history. In 2007, vandals firebombed an abortion clinic run by Dr. Curtis Boyd. Arsonists attacked a Planned Parenthood clinic that same year and also once eight years before.

The incidents, which occurred after hours, didn’t injure anybody.

The last attack at a abortion clinic that left people dead happened in Boston in 1994, when John Shelby killed receptionists at two clinics. Violence, of course, can happen outside clinics as it did in Wichita, Kansas when a gunman shot Dr. George Tiller while he was attending church.

That incident prompted two physicians who worked under Tiller to relocate to Albuquerque. They now work at Southwest Women’s Options, which is often targeted by protestors because it’s one of the few clinics that provide abortions well into the third trimester of pregnancy.

Cohen argued that the first thing clinics need to consider when measuring safety is their location. Easily accessible clinics, he said, can lead to problems with protesters.

He cited two clinics in downtown Philadelphia, the city he lives in, as an example. There, the front doors of the clinics are located right next to the sidewalk, making it easy for protesters to stand near the entrances.

This is in sharp contrast with clinics like Southwest Women’s Options, where a private parking lot keeps protesters at a distance from patients who enter the front door.

“I think that the opportunity at the outset of thinking strategically when you located the clinic is an important one,” he said.

Clinics also need to be careful with who they hire as support people to help patients out. Support people are allowed to go into the back of the clinic, and Cohen said it can be hard to know what their biases are.

“Adding someone into the back who is not a patient creates complexities,” he said.