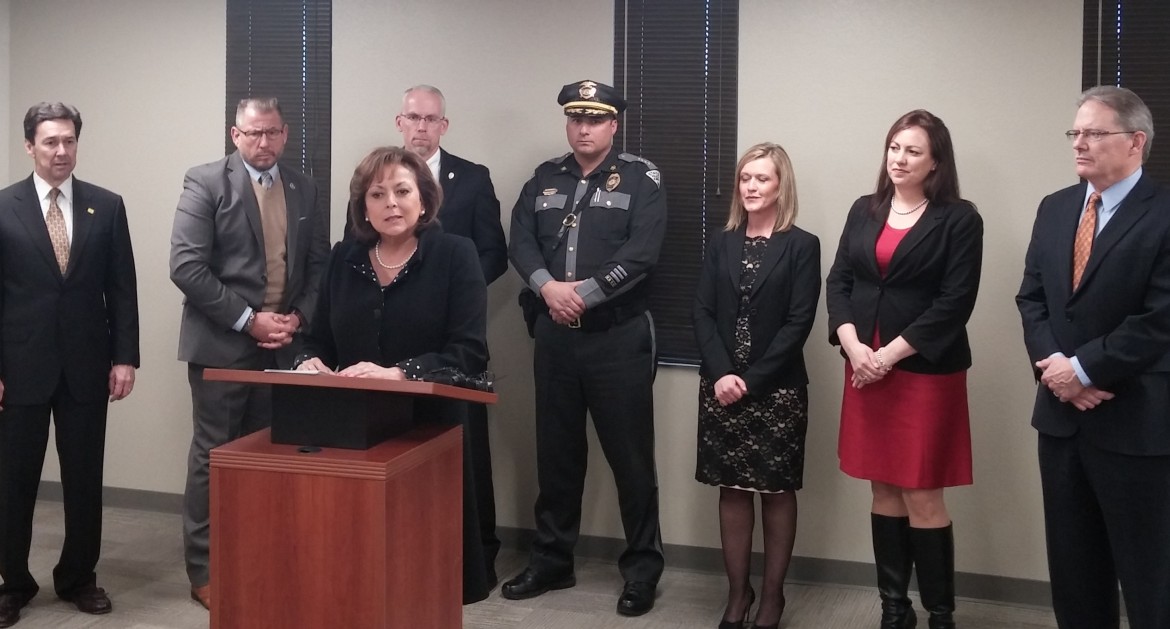 That comes out to a 3.7 percent increase over the previous year’s budget. At a press conference in a downtown Albuquerque building that houses the state Corrections Department, Martinez said her proposed budget emphasizes “three things above all others”— education, public safety and jobs.

The proposal comes even as legislators warn about the effects of low oil prices that show no sign of increasing. Martinez said her budget’s new spending is slightly less than the proposed revenue increase of $232 million released last month.

“Of course, we all know that energy prices remain persistently low,” she said. “We dropped roughly 10 percent since the forecast was announced, in fact.”

The budget proposal may need to tighten further as the state monitors its revenue, she said, which relies partly on oil and gas.

“And that’s OK, because whatever the revenue will ultimately be, our priorities will remain unchanged,” she said.

Top among them is cracking down on what Martinez called “the havoc that repeat violent offenders have been creating on our state.”

“There will be a number of good pieces of legislation this session to crack down on offenders and keep them away from our families,” she said.

Republican members of the state House of Representatives have introduced and pledged to introduce bills that will toughen the state’s “three strikes” law against violent offenders, add mandatory minimum prison sentences for offenders and include law enforcement officers as a protected class in the state’s Hate Crime Act.

The budget proposal, prepared by Martinez’s Department of Finance and Administration, does not include across-the-board raises for state employees, which Democrats have sought for years. However, it does include raises for police officers and raises for Level 1 teachers but not for Level 2 or Level 3 teachers. It also includes $11 million for “targeted” raises mostly to public safety for positions such as correctional officers, forensic scientists and child abuse caseworkers.

“With respect to compensation increases for state workers, I have chosen, once again, to prioritize,” Martinez said. “To prioritize those positions that are the hardest to recruit and to retain.”

She argued the added money would also give the state more resources to cross-check untested rape kits against a national database to clear the state’s backlogs.

Martinez also said her plan would also dedicate money to work on a clearinghouse that would give judges more access to defendants’ criminal histories.

The largest chunk of new funding comes in education, which makes up 44 percent of the total new spending. In addition from raising the salaries of Level 1 teachers, the budget proposal also includes $7 million in new funds for pre-Kindergarten spending and $8.75 million to expand a mentorship program for new teachers.

When it comes to jobs, the increases in funding included funding for the state’s Job Training Incentive Program and another $10 million for the state’s “closing fund.” The money is for discretionary grants though the state Local Economic Development Act. The Albuquerque Journal reported in November that only $8.7 million of the $50 million allocated for the closing fund had been spent.

Martinez described family support workers, who interact with families with CYFD support, as “on the front lines of trying to prevent difficult situations from becoming tragedies.”

Her budget also includes an additional $2.3 million for the Tourism Department for more advertising.

The increase is in line with projections that the Legislative Finance Committee heard early last month, though members expressed skepticism that the funds would stay at that level. Projecting revenues is an inexact science.

Like most states, New Mexico is required by law to balance the budget annually. So, the state cannot spend more money than comes in.

Martinez characterized her proposal as “quite cautious in its approach,” noting that 66 percent of state agency budgets are flat.

Correction: Corrected headline to say there was $228 million in new spending in her budget, not $228.