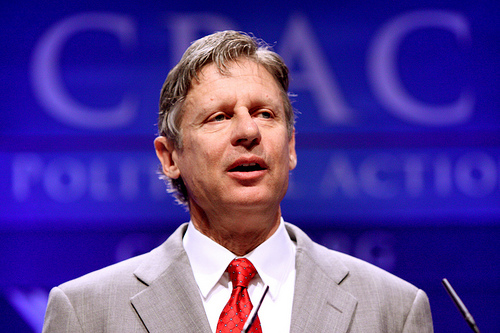 Johnson made the announcement Wednesday morning on Fox Business Channel, citing the federal debt and the size of government.

“It is up for grabs,” Johnson told NM Political Report in a phone interview on Wednesday morning. “If I’m not the nominee, so be it.”

“I am hoping to get the Libertarian nomination for President in 2016 and, in fact, offer that alternative,” Johnson told host Neil Cavuto according to a clip posted on Twitter.

The first thing that most voters think about when they hear Johnson’s name, if they recognize it at all, is his support for the legalization of marijuana. Recently, Democratic candidate Bernie Sanders, a Senator from Vermont, outlined his support for lifting the federal ban on marijuana.

Johnson is also part of a lawsuit against the Presidential Debate Commission in an attempt to include third parties in the general election debates.

The former governor first ran for president in 2012 as a Republican, but was unable to gain traction or make the stage for most debates. He then switched gears and became a member of the Libertarian Party and was their nominee in 2012.

That Johnson is running is no surprise. He has been dropping hints for months that he would be running for the Libertarian Party nomination. In October, he told NM Political Report that he was “hopeful” that he would run again.

In July in an interview with Reason, a libertarian magazine, Johnson was harshly critical of Republican frontrunner Donald Trump.

“He is appealing to a segment that I’ll just label racist,” Johnson said at the time. “And it exists and it’s out there and, you know what, I don’t want anything to do with it.”

He also criticized Democratic frontrunner Hillary Clinton as well as Republican candidate Jeb Bush. Johnson said that Clinton and Bush represented the status quo; Clinton has continued to lead the Democratic nomination while Bush has fallen back to the pack and is in fifth place.

He reiterated his comments on Clinton on Wednesday, saying it is obvious that she will be the Democratic nominee.

“Hillary is going to bring change?” he asked. “I don’t think so.”

Johnson left his position as CEO of Cannabis Sativa, Inc. earlier this week. The company said he was leaving to pursue political opportunities.

If he doesn’t get the nomination, he said he would have no regrets.

“I’m hoping on my deathbed that I was voice of reason,” Johnson said.