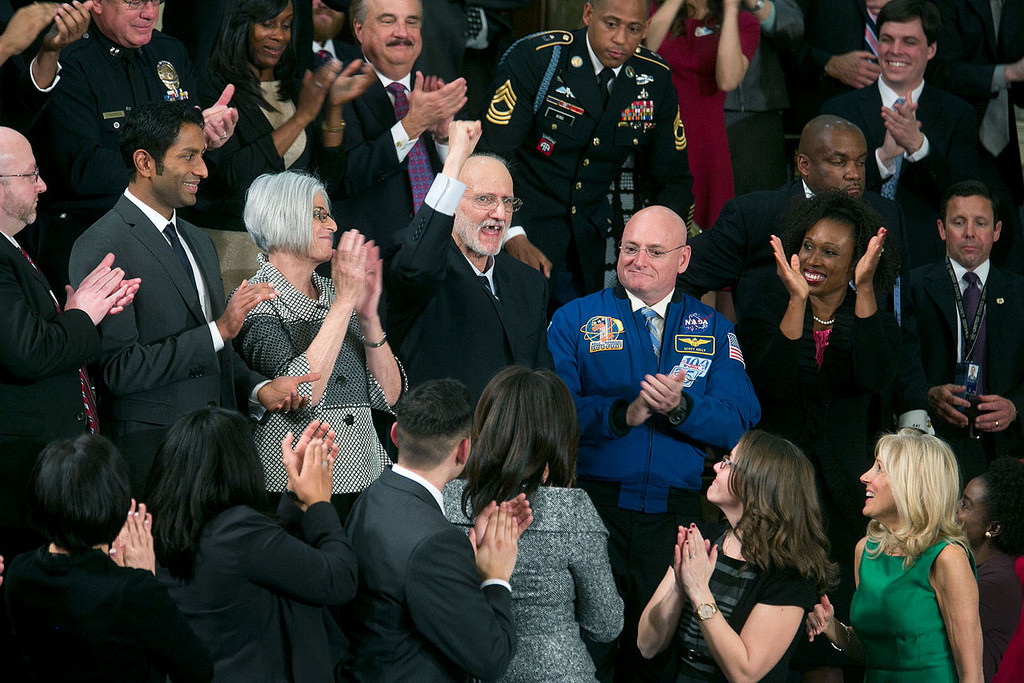 "Recently released from prison in Cuba, Alan Gross pumps his fist in the air from First Lady Michelle Obama's box after President Obama acknowledged him at the State of the Union address at the U.S. Capitol." (Official White House Photo By Chuck Kennedy)

President Barack Obama gave his final State of the Union address on Tuesday night. He

“Recently released from prison in Cuba, Alan Gross pumps his fist in the air from First Lady Michelle Obama’s box after President Obama acknowledged him at the State of the Union address at the U.S. Capitol.” (Official White House Photo By Chuck Kennedy)

We let you know who each member of New Mexico’s delegation—two U.S. Senators and three U.S. Representatives—brought to the event. Afterward, the members sent out statements reacting to the events.

The Democrats in the delegation were supportive, while the lone Republican said that Obama was “out of touch.”

U.S. Sen. Tom Udall said that Obama was “right to be upbeat” during his final State of the Union, saying that “we’ve made tremendous progress in this country.” He mentioned health care reform, education reform and efforts to address climate change.

Still, Udall said there was work to be done.

“New Mexico was hit hard by the economic crisis, and we must work together to create jobs and rebuild the economy. We must reform our broken immigration system and end prescription drug abuse,” Udall said. “But tonight, the president cut through the negativity we hear so often from the campaign trail. Since I was elected to the Senate, I’ve worked to tone down the partisanship that divides us by reforming the Senate rules and fixing our broken campaign finance laws.”

Udall has long been a supporter of stricter campaign finance laws, including overturning the Supreme Court’s Citizens United decision.

Like Udall, U.S. Sen. Martin Heinrich liked Obama’s tone, saying he “articulated the strength and spirit of the American people.”

One thing Heinrich mentioned, like Udall, was climate change.

“In New Mexico, we’ve experienced the effects of extreme weather conditions firsthand through severe drought, larger wildfires, and increased flooding,” Heinrich said. “We have a moral obligation to be responsible stewards of this earth so that our children and future generations inherit a healthy planet.”

U.S. Rep. Michelle Lujan Grisham has pivoted towards addressing gun violence during her most recent term. While there was a famously empty chair in the House chambers for victims of gun violence, Obama barely mentioned gun violence in his State of the Union.

“While New Mexico families suffer from the highest unemployment in the nation, a foreclosure rate that is nearly twice the national average, and college graduates who are looking elsewhere to find good-paying jobs, Republicans have refused to act on policies that build working families,” Lujan Grisham said. “We still have time to act on increasing the minimum wage, guaranteed paid leave and free access to community colleges like the President proposed.”

U.S. Rep. Steve Pearce, the lone Republican, was less of a fan of the address.

“Tonight, the President demonstrated how out-of-touch he is with the American people.  When he risks our national security or damages our health care system that hurts American jobs, he calls it an accomplishment,” Pearce said. “He cannot implement his policies without increasing taxes. Instead of helping Americans, he has put their jobs, economy, and way of life at risk.”

Pearce instead advocated for lower taxes, making the country energy independent and bringing manufacturing jobs back to the country.

“We are well on our way to ensuring a robust and sustainable economic recovery that will contribute to the building of prosperity for generations to come,” Rep. Ben Ray Luján  said in a statement. “Strengthening Science, Technology, Engineering, and Math (STEM), promoting college affordability, and investing in a clean energy economy will mean a more vibrant middle class that is the key to a brighter future for New Mexico.”

He also praised the optimism but said there was work to do when speaking to the Albuquerque Journal afterward.