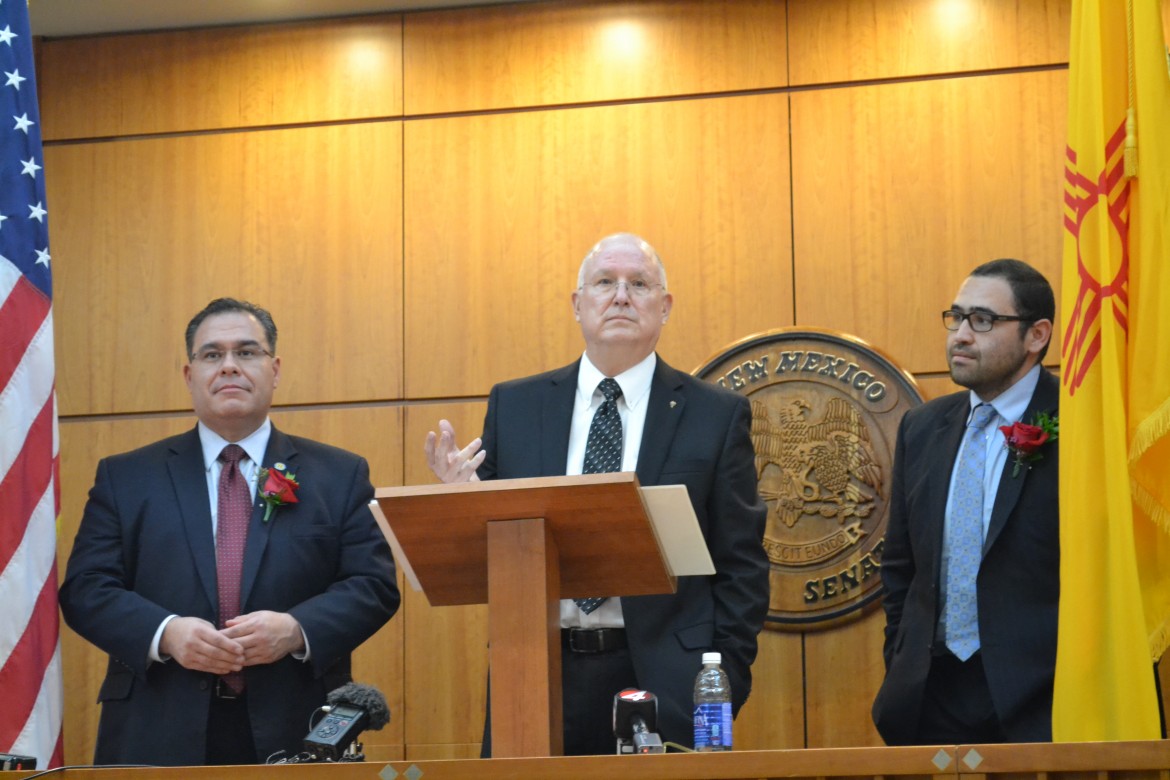 And he didn’t save all of his frustration for Republicans.

“Once again, for the news media, especially the television news media, let me make it clear once and for all: You don’t need a passport to get on an airplane in the state of New Mexico,” Sanchez said to members of the media. “That’s false, and those reporters who report that are wrong.”

Sanchez then referred to how an official from the federal Department of Homeland Security wrote a letter to the editor in response to a November Albuquerque Journal editorial that stated New Mexicans would not be able to use a state driver’s license to board commercial flights “later next year” because of the state’s noncompliance with the federal Real ID Act. The federal government, at that point, had not provided a deadline for when New Mexico driver’s licenses would stop being valid in airports.

An Albuquerque Journal reporter was in attendance at the response, as were representatives from several local TV news stations.

Sanchez brought up issues that he felt haven’t received enough media coverage. Among them were how Martinez was the Doña Ana County District Attorney when that office made a plea deal with the person who later on became accused of killing Albuquerque police officer Daniel Webster, how a recent poll shows 56 percent of the public supporting driver’s licenses for undocumented immigrants and how the Senate last year passed a bill 35-5 that met Real ID requirements but also kept driver’s licenses for undocumented immigrants.

Republicans have criticized the poll, conducted by Latino Decisions for Somos un Pueblo Unido, and said it is inaccurate. They have also said that the Senate bill that passed last year would not make New Mexico REAL ID compliant.

For the legislative session, Sanchez said Senate Democrats would focus on investing in early childhood education, creating “living wage jobs for workers” and providing “vigilant protection of our air and water,” among other issues.

He pledged to fight right-to-work legislation that bars union “fair share” fees as a condition of work. Sanchez criticized the legislation as “anti-worker” and giving “big corporations power to cut family wages.”

He said REAL ID will require people to give up a lot of personal information that would go in a federal database.

Though the federal government has promised that the database will be safe, Sanchez said, “I’m sorry to say we have a lot of hackers around.”

Real ID, he said, should alarm “the libertarian in all of us who don’t want cameras in our bedrooms.”

Sanchez criticized Republican House leadership and Martinez for pushing “tough on crime” bills, noting that the federal government “is going away from mandatory sentencing.” He lamented that none of the proposed bills have money going toward drug rehabilitation.

And referring to a “religious freedom” bill, Sanchez vowed that the Senate “is not going to allow any bill in there that discriminates against our people.”

The bill, sponsored by state Rep. David Gallegos, R-Eunice, would make it so people who refuse professional services based on religious beliefs are immune from lawsuits.

“What is it about my partner and i enjoying our weekend in Santa Fe together when we pay our bill? What is it about that that offends your christian faith?” Candelaria, who is openly gay, said. “Because I’m a Roman Catholic, I go to mass every Sunday, and it doesn’t offend mine.”