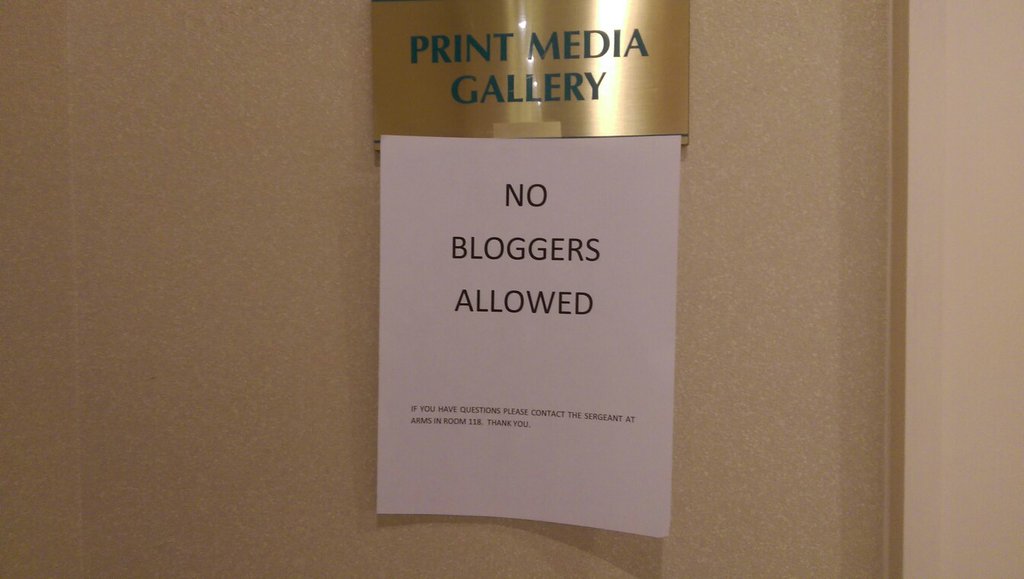 The drama started early this year at the Roundhouse. The legislative session hasn’t even started yet, but a photo (by this writer) received a lot of attention.

So NM Political Report, which is an online-only outlet, went to speak to the Sgt. At Arms. He said that Senate Rules only allowed accredited press, television and radio.

In the seven years that this reporter has been covering the legislative session, no one has ever been removed from the press areas for not being accredited.

Here is the Senate rule in question:

Passes shall be issued by the chief clerk to duly accredited members of the press, radio and television, which allow them the privileges enumerated herein. At the chief clerk’s rostrum, an area of four or five seats may be made available for the writing press. During the committee of the whole, television cameramen may be allowed on the floor to photograph the speaker. Television and still photographers may be allowed on the corners of the lieutenant governor’s rostrum for purposes of photographing senators and senate activities. A sergeant at-arms shall be posed to prohibit visitors from the two press boxes. Passes shall also be issued by the chief clerk at the request of and to be countersigned by the senator or the president for the period designated by the senator or the president to members of the senator’s or president’s family or special guests as evidence of the privileges granted under other rules passed by the senate granting such privileges.

It isn’t clear who decides what accreditation is needed. NM Political Report reporters received a press pass after providing business cards, but no other identification.

NM Political Report did not ask if a sergeant at arms will be posed to prohibit from the press box as the rules say.

The Republicans, meanwhile sent out a press release getting in on the action.

“All media, including bloggers, are welcome to use the House Majority Conference Room and Print Gallery today.”

However, it isn’t clear who put the sign up. It doesn’t appear to be the Senate leadership and the Sgt. At Arms said it wasn’t him.

Update 2: The Senate said it was an unauthorized sign.

An unauthorized sign was placed on the door of Senate press room and has been removed. All credentialed media are welcome. #NMPol #NMLeg

Who decides what is credentialed is still not known.
Correction: Joey Peters is a past board member of the local chapter of SPJ, not a future one. Peters does not have time traveling technology.